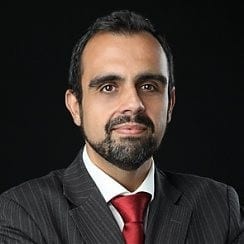 “It is an honour for me to be named President of RICS in Portugal, especially at a time when the real estate and construction sectors have so much responsibility,” said Covas.

RICS (the Royal Institution of Chartered Surveyors), a leading international real estate accreditation organisation, has appointed José Covas as its new President in Portugal and has elected new members of its board.

José Covas, who succeeds Francisco Rocha Antunes, is MRICS qualified and is the Managing Partner of AuraREE in Portugal, an independent Spanish consulting company, based on real estate data, with headquarters in Madrid, Lisbon, Milan, Athens and Lima. Covas has extensive experience in the valuations sector, having spent part of his professional career working for companies such as Colliers, DTZ, Worx and Knight Frank. Covas is also a Managing Partner of AuraREE in Spain, Italy and Greece and he teaches Masters courses at various educational institutions.

The Board of Directors of Realia has unanimously approved the decision to change the valuation method for its assets linked to property development to bring it in line with market practice.

The listed real estate company has notified the National Securities and Exchange Commission (CNMV) that it will adopt the July 2017 professional standards of the Royal Institution of Chartered Surveyors (RICS) from the end of H1 2019 onwards.

“Few countries in the world have as much regulatory complexity as Spain”, said Alfonso Benavides, Chairman of the Urban Land Institute in Spain yesterday, at the Sustainable Urban Development Forum organised by the newspaper El País and sponsored by Distrito Castellana Norte. According to experts, the diversity of legislation hampers growth in a sector that has great potential for expansion. The politicisation and lack of a roadmap for management plans represent another obstacle”. “There is no strategic vision”, said Eduardo Fernández-Cuesta, Chairman of RICS in Spain.

The system is so complex (and hard to interpret) that it generates more questions than it answers. The continuous updates to the regulatory framework resolve one set of problems and create another. “The private sector can work with complexity, but not with uncertainty over timings”, warned Benavides, who pointed out that the first draft of an urban planning request alone can be up to 2,500 pages. The proposed extension of the Castellana being managed by Distrito Castellana Norte has been in the pipeline for more than 20 years, awaiting the various approvals.

“The fundamental concept is legal security, something which we currently lack”, said Ricardo Martí-Fluxa, Chairman of the Spanish Association of Real Estate Consultancy Companies. It is estimated that for every €1 million of real estate investment, between 18 and 20 jobs are created. In his opinion, we should stop demonising the economic gains of projects because the private sector, which has to drive these processes, must be able to generate a return from its investments and he noted that Town Halls in other European capital cities, such as London, are determined to give companies facilities so that they can execute such investments.

Juan Antonio Gómez-Pintado, Chairman of the Association of Real Estate Developers in Madrid, expressed the same views. He noted that the first people who are interested in putting an end to speculation are property developers. “It is absolutely essential that land is available, when it is restricted, a natural speculative process occurs. By the law of supply and demand, when land is restricted, its price increases”, he complained. (…).

The big question is, following the burst of the real estate bubble, whether Spain needs to continue building homes. The Ministry of Development, which prepares an annual report, estimates that there are 43,000 empty new homes in Madrid alone. Sources in the sector dispute those figures. “The report is prepared using a valid methodology, but it does not reflect the reality because, for example, it does not take account of the fact that the owner of a new home may not want to sell it”, said Juan Fernández-Aceytuno, CEO of Sociedad de Tasación. The actual number, if we look on a promotion by promotion basis, does not exceed 8,000 homes in Madrid. “One of the major problems is that we have run out of stock”, said Gómez-Pintado.

Nevertheless, the experts agree that, a new bubble is unlikely, especially due to the lack of available mortgage financing. In 2006, around 1.3 million loans were granted. In 2014, that figure barely reached 350,000. “There is no risk of a bubble”, said Fernández-Aceyuno. “We expect a period of stability in terms of house prices across the country”.

Investment / In some autonomous regions, foreign citizens are purchasing up to one third of the houses being sold.

Foreign investors are buying one out of every eight homes sold in Spain. And in some autonomous regions, that figure increases to one in every three. That is the main finding from data released by the Association of Registrars, which published a guide – in English – yesterday aimed at foreign citizens interested in purchasing a home in Spain…”.

Foreign purchasers accounted for 12.5% of all residential property sales registered during the first half of 2015, “and even represented between one third and one quarter of purchases in certain autonomous regions, such as the Balearic Islands, where they accounted for 33.5% of all purchases made during the second quarter”, said the registrars.

Those were the headlines presented by Beatriz Corredor, the Director of Institutional Relations at the Association of Registrars. The former Housing Minister said that “the trend is rising”. In other words, foreigners are expected to continue their activity over the next few quarters. “The level of interest is not waning”, at least for the time being, added Corredor.

The guide, entitled “Guide to buying a property in Spain” has been prepared in collaboration with the Royal Institution of Chartered Surveyors (RICS) and the International Association of Property Professionals (‘Asociación Internacional de Profesionales de la Propiedad’ or AIPP). The intention is for registrars to accompany foreigners seeking to buy a home in Spain through each stage of the process. “The booklet guides potential buyers through the different stages, in chronological order, from the search for a property through to the registration of the purchase in the Property Register, with detailed explanations about the procedures that need to be followed during each phase, along with useful advice and warnings about the precautions that should be taken and the differences compared with other legal systems”. In fact, the guide contains a list of information and considerations that would be of interest to any purchaser thinking of buying a home: information that can be obtained from the Commercial Register, location and physical characteristics of the home, energy efficiency certificate, licences and insurances.

The intention is to “make the way in which homes are sold in Spain more professional”, says Afredo Millás, the Chairman of RICS. Millás confirmed that the guide is aimed primarily at buyers from the UK, which is hardly surprisingly, given that British citizens are responsible for one in every five foreign buyer purchase (19.85%), well above the purchases made by the French (8.1%), Germans (7.65%) and Belgians (6.5%).

Axiare Patrimonio has obtained more financing to fulfil its business plan, increase its real estate portfolio and continue growing as a company. The Socimi has just closed a bilateral financing agreement with CaixaBank through which it will receive €30 million, which it will invest in the acquisition of new prime real estate assets allocated for tertiary use, primarily in Madrid and Barcelona.

The operation has a 15-year term and represents an LTV of 50%, in line with the objective set by the company and reported in its prospectus for the €395 million capital increase that it completed in June.

With this new agreement, the company has covered the financing plan forecast for the assets in the portfolio acquired before the capital increase and which represents funding of €294 million. During the summer alone, the entity secured funding amounting to more than €100 million through three financing operations with Santander (€42.3 million), Bankinter (€27.4 million) and ING Bank (€37.3 million). (…).

The financed properties belong to the portfolio of prime offices that the company owns in Madrid. One of its properties, on Calle Fernando El Santo (pictured above) is a Class A office building that has been fully renovated and is classified as a building of historical and artistic interest – it is located on the central Madrilenian thoroughfare of the Paseo de la Castellana, has a gross leasable area of 3,254 m2 and 42 parking spaces, a rare feature amongst similar office buildings in this area of Madrid, which is an important business centre. (…).

The €30 million from CaixaBank will be allocated to the acquisition of new property, focusing on the main financial districts in Madrid and Barcelona, in line with its existing portfolio, 40% of which comprises office buildings in the CBDs of Madrid and Barcelona.

In just over one year, Axiare Patrimonio has invested €805 million in 11 operations and has whereby acquired 28 assets in the Spanish tertiary real estate sector, primarily in Madrid and Cataluña. 73% of the company’s real estate portfolio corresponds to Class A offices, 18% is represented by logistics platforms and 9% comprises other tertiary use assets, such as shopping centres and retail stores.

As at 30 June, the company’s portfolio had increased in value by 11% according to a certificate issued by the real estate consultancy CBRE, in accordance with RICS (Royal Institution of Chartered Surveyors) standards and published in the CNMV.

Axiare Patrimonio’s investment objective, which is described in the company’s strategic plan, focuses on the acquisition of assets that are classified as or have the potential to become Class A rated, and that require active management in the most sought-after areas of Barcelona and Madrid; logistics assets in the main distribution corridors; and shopping centres and outlets across Spain.