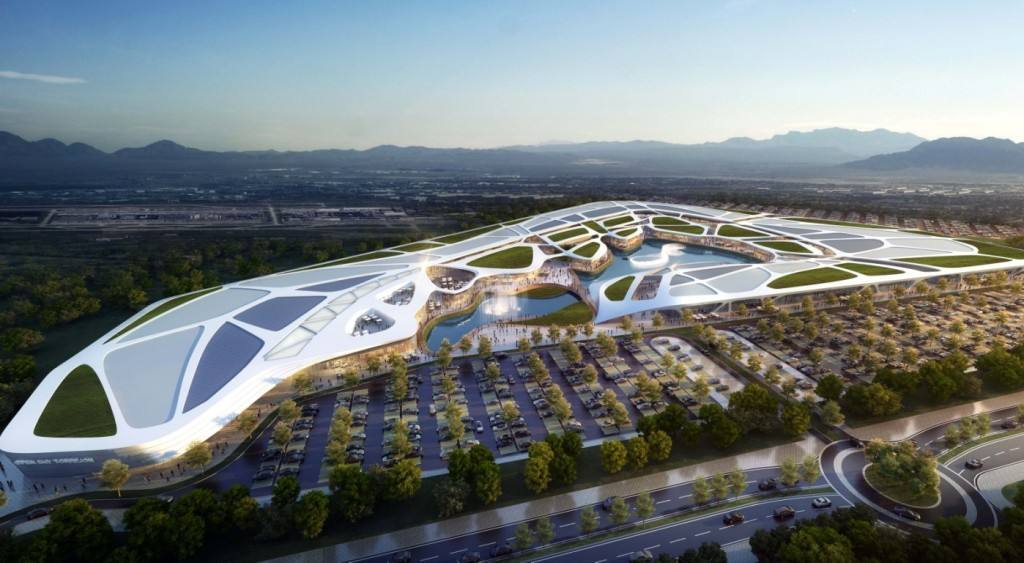 The Open Sky shopping centre in Torrejón de Ardoz, Galería Canalejas in Madrid, and Ànec Blau and La Torre Outlet in Zaragoza are just some of the projects that are going to delay their openings.

13 new shopping centres were scheduled to open in Spain during 2020, spanning a gross leasable area (GLA) of 333,670 square metres. Moreover, many other shopping and leisure complexes were due to reopen and/or be expanded this year, but those plans have now been detained by the Covid-19 crisis.

“The project forecasts that we manage at the Spanish Association of Shopping Centres (AECC) span two years. Specifically, we had calculated that new space with a GLA of 726,450 square metres and expansions with a GLA of 94,629 square metres were due to open,” explains Eduardo Ceballos, President of the AECC, speaking to Brainsre.news.

Yesterday, after more than a year and a half of negotiations, Redevco Iberian Ventures – the joint venture formed by Redevco and Ares – closed the purchase of 70% of Parque Corredor (located in Torrejón de Ardoz, Madrid) for €140 million. The new owners are preparing to give the asset a makeover, with an additional investment of €40 million, which will be used primarily to renovate the asset. Until now, Parque Corredor had a very fragmented ownership structure (…) and although the asset has an occupancy rate of 95% and receives more than 10 million visitors per year, investment is required for its repositioning.

With the completion of this operation, which has been advised by Deloitte, Cushman & Wakefield and Simmons & Simmons, Redevco Iberian Ventures has acquired the 40% stake held by Sareb – the largest shareholder until now -; the 14.5% stake held by Aermont (previously Perella Winberg); the 3.6% stake held by El Corte Inglés; and the 3% stake held by Bowling, as well as almost 10% held by smaller shareholders. On the other hand, Alcampo will retain its 24% stake in Parque Corredor, as will the Town Hall of Torrejón de Ardoz, which owns a municipal court there, and Toys R’ Us.

Parque Corredor is the third largest shopping centre in the Community of Madrid, behind Xanadú and Parquesur, and one of the largest in Spain, with a surface area of 123,000 m2 and 3,800 parking spaces. In the past, the centre was controlled by CatalunyaCaixa, which foreclosed a loan that had been granted to Testa. That stake was subsequently passed onto Sareb.

The new owners plan to reposition the shopping centre, which opened its doors in 1996. Redevco and Ares plan to spend €40 million on the complete renovation of the asset, which will be undertaken in stages and will not result in the temporary closure of the shopping centre. The remodelling plan, approved in July last year by the community of owners of the centre, is supported by the tenants.

The proposed renovation will involve increasing the size of the stores so that some of its main tenants can open flagship stores there and making the leisure area more attractive to increase the number of visitors. The renovation work may take between 12 and 18 months. Parque Corredor is home to 180 establishments, an Alcampo supermarket measuring 24,000 m2 and nine cinema screens managed by Cinesa. Currently, the fashion and accessories section accounts for 24% of the shopping centre, with tenants such as Primark, H&M, El Corte Inglés, Sfera and Mango, amongst other brands. Next comes the Alcampo hypermarket (24%), the restaurant area (14%), leisure (10%), services (9%) and food, perfume and cosmetics (9%).

The company owned by Redevco and Ares has funds amounting to €500 million allocated for identifying and acquiring assets.

In the end, there will be a sale. Sareb has managed to reach an agreement with Redevco and Ares to sell them the Parque Corredor shopping centre, in an operation that is expected to be closed within the next few days, according to sources familiar with the transaction. This deal will fire the starting gun for the complete transformation of the Madrilenian shopping centre.

As El Confidencial revealed, the entity chaired by Jaime Echegoyen had joined forces with Perella to complete one of the operations that has been on Sareb’s desk for the longest, but which has never ended up being signed (until now) for various reasons, including the dispersed shareholding of Parque Corredor and the divergent interests of those shareholders.

The sum of Sareb and Perella’s forces guaranteed that Redevco and Ares would take a majority stake in the shopping centre, given that the former holds 40% of the share capital and the latter holds 20%. But, more support was always needed to enable it to undertake a complete transformation and whereby compete with the neighbouring Open Sky, a shopping centre that is currently being constructed just four kilometres away.

In the end, both El Corte Inglés, the owner of just under 4% of Parque Corredor, which has an outlet store there, and Alcampo, owner of just over 20%, have decided to join the sale initiated by Sareb, according to the same sources (…).

The offer from Redevco and Ares values the whole centre at around €200 million, an amount that will be added to the planned investment of €20 million required to renovate the centre. The renovation project that has been entrusted to the Chapman Taylor studio.

Parque Corredor is a shopping centre giant with a retail surface area of 123,000 m2 and 180 stores, located in the Madrilenian town of Torrejón de Ardoz. Its tenants include the Spanish firm Mango, the Swedish retailer H&M, the Irish firm Primark and the French retailer Kiabi, all direct rivals of Zara.

This shopping centre went through its toughest time four years ago when Inditex decided to vacate because of the poor upkeep of the complex. Nevertheless, in recent times, confidence in the centre has been returning, with some of the retail group’s brands opening stores there, such as Bershka, Pimkie and Stradivarius. To date, there is no sign of the flagship brand Zara returning just yet.

Sareb has been advised in the operation by Knight Frank, Perella has received the services of Cushman & Wakefield, whilst Redevco and Ares have been working with Deloitte.

Yesterday, the French group Compagnie de Phalsbourg managed to close financing, amounting to €157 million, for its first shopping centre in Spain: the Open Sky centre in Torrejón de Ardoz (Madrid), according to Expansión.

The establishment will have a gross leasable area of 85,000 m2, will house 100 stores, 3,500 parking spaces and a large garden area with a central lake.

To obtain the necessary resources for its project, Compagnie de Phalsbourg has resorted to non-bank financing through a competitive process. Sources close to the operation maintain that a single fund has subscribed 100% of the financing. According to the same sources, it is a fund based in the City of London, specialising in the real estate sector.

“This process is a boost for Spain because it shows that international investors, in this case, French and British players, see potential in Spain”, say financial sources. The crisis in Cataluña has not affected the process in this case, whose negotiations started long before the tension escalated in that regard.

The French group expects that Open Sky will be inaugurated by the end of next year. In fact, the first earth movement work has now begun and the land that Compagnie acquired for €110 million from the Town Hall of Torrejón in 2015 is being prepared (…).

The company has already signed agreements with around twenty fashion labels, accessories brands and service providers, including with many high-profile names such as Adidas, Reebok, Decimas, OVS, Okaidi, Merkal, Kiwoko, Orchestra, RKS, Celio, Encuentro Moda and Druni, amongst others. Moreover, the shopping centre will have 11 Cinesa cinema screens with capacity for 1,200 people and it has already signed agreements with restaurant groups such as the Vips group, with its five brands (Vips, Fridays, Ginos, Wagamama and Starbucks); the Zena group (Fosters and Cañas y Tapas) and the Restalia group (100 Montaditos and La Sureña).

Once Open Sky is fully operational, it is expected to generate approximately 1,000 new jobs in the region.

The Spanish investment boutique Alantra has served as the sole advisor to the operation for the French group. In addition, Alantra has advised the firm on three other projects in Spain. Meanwhile, Clifford Chance and Uría have been responsible for providing legal advice (…).

The French group has purchased a plot of land measuring 138,000 m2 from the Town Hall of Torrejón, where it plans to develop a huge shopping centre.

The French group Compagnie de Phalsbourg, which specialises in the promotion and management of shopping centres, has chosen Spain for its first international adventure. The company, founded by Philippe Journo, has completed the purchase of a plot of land measuring 138,000 m2 in the Madrilenian suburb of Torrejón de Ardoz, where it plans to construct a huge shopping centre. “After more than 20 years of experience in France, we have decided to expand overseas. We have looked at opportunities all over the world, including in: China, Russia, Italy, Romania, etc. In the end, we have decided to invest in Spain because now is the right time here…”, explains Raphael Martin, the Director General of Compagnie de Phalsbourg.

The French group has been awarded this plot of land, which is located next to the Torrejón air base, through a public tender. It will pay €15.4 million (plus VAT) for the site. “We have just completed the land purchase and we want to begin construction at the beginning of April, so that the tenants can begin to move in during 2017 and then open their doors between April and May 2018”, says Martin.

The new shopping centre, called Open Sky, will have a retail surface area of 65,000 m2, spread across 60 stores, plus 2,500 parking spaces. “It will be an open concept containing, for the most part, fashion chains with stores of between 50m2 and 500m2, distributed along a corridor that will run for more than than 1.5km”. Compagnie de Phalsbourg will invest €110 million in the centre and will create around 450 jobs.

This is not the only project that Compagnie de Phalsbourg has underway in Spain. The company is also working on the second phase of this project, which involves the construction of an outlet centre measuring around 22,000 m2, designed by the renowned architect Philippe Starck.

“In total, we are going to invest €170 million, plus the amount that the brands will spend opening their stores. Up to 800 people will work at our complex in Torrejón”.

In addition, the French group, which owns assets worth €1,200 million, is evaluating other projects in the Spanish market. “We are looking at other locations in Madrid, Barcelona and the País Vasco”.