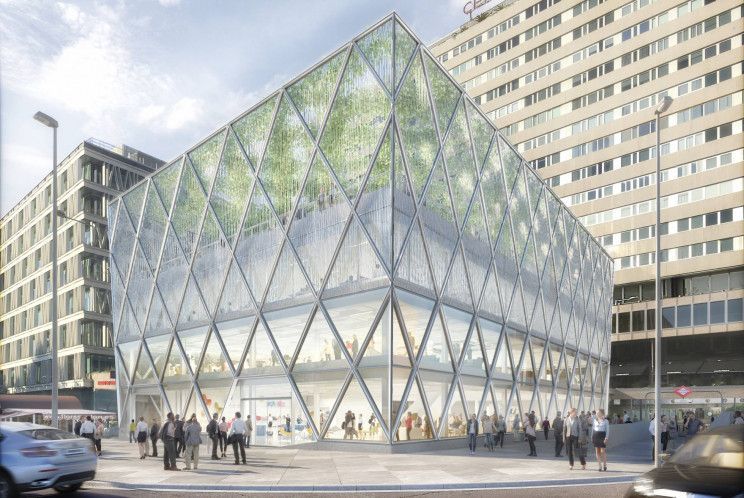 4 January 2020 – GPF has acquired what the Axis building from CBRE GI for 100 million euros. The building, which will be CaixaBank’s future flagship office, is located at Plaza de Colón 1, in Madrid. The building is still under construction.

The first major deal of 2020 will start off what market watcher believe will be a frenetic year for the real estate sector due to high levels of liquidity and low bond yields.

The Axis building, which once housed Barclays, was acquired by CBRE GI from CaixaBank itself in 2017. CBRE then initiated a major renovation designed by the renowned architect Norman Foster.

According market sources, CaixaBank has won the bid to acquire the iconic glass-cube Axis building that Normal Foster is building in Plaza de Colón in Madrid.

The bank has reportedly fought off competition from Tesla and Microsoft and so the property will be occupied by a sole tenant, rather than by various shops and offices as initially envisaged.

The building work is expected to be completed at the end of this year and the property will comprise three open-plan floors, with large transparent façades overlooking Plaza de Colón and Calle de Génova, as well as a rooftop terrace.

CBRE Global Investors (CBRE GI) is increasing its commitment to Spain with its latest project. The investment arm of the CBRE group is going to invest €10 million in the project to renovate the building at number 1 Plaza de Colón and, to this end, the multinational firm has engaged one of the most sought-after architects in the world, Norman Foster. The new property, which is going to be constructed on the site of the former Barclays headquarters, will become the star of CBRE GI’s growth plan in Spain.

The asset manager acquired the former Barclays headquarters in 2017. In November of the previous year, the financial institution started to sound out the possibility of selling the building on Plaza de Colón (at the intersection of Paseo de la Castellana and Paseo de Recoletos) to move to another location and, three months later, in January, it sealed the deal.

Three years after the acquisition, CBRE GI is preparing to transform the building, a project that has formed part of its plans since it completed the operation. The former Barclays headquarters is now beginning a renovation that will convert it into Axis, where offices and a commercial area are going to be opened on the four floors that will comprise the new asset.

This project forms part of an investment plan that will amount to €800 million. The company has almost one hundred properties in its portfolio, spread across the retail, office, logistics and hall of residence markets.

Nevertheless, in May, the company announced that it is going to enter the residential sector in 2018. The consultancy firm’s investment fund wants to access that segment through the rental market (…).

The company’s objective for this year is to repeat or even exceed the investment figure recorded last year. In 2017, the manager closed transactions amounting to €1.3 billion.

In addition, CBRE GI, which works with eight investment funds in Spain, manages a portfolio of assets worth €3.2 billion (…).

Pontegadea, the real estate investment vehicle owned by Amancio Ortega (pictured below) is starting the year by reorganising its business. The company has segregated its property rental activity in Spain into the company Torre Norte España, now Pontegadea España, which has also increased its share capital by €100 million.

According to a statement published in the Official Gazette of the Mercantile Registry (Borme) on Tuesday, the new real estate subsidiary will group together most of Ortega’s assets in Spain, worth more than €1.6 billion. The portfolio includes Torre Cepsa, designed by the architect Norman Foster.

Specifically, Pontegadea will own Pontegadea España as a subsidiary. The founder of Inditex will unify almost all of his real estate business in the Spanish market into that company.

In parallel to this asset reorganisation, the company Partler 2006, which sits under the umbrella of the Pontegadea group and which owns 9.284% of Inditex, has merged by absorption with RL30 Inversiones, owner of the building on Gran Vía, 32, which is home to one of the largest Primark stores in Europe.

The reorganisation of the Inditex founder’s real estate assets is a formal matter from a legal point of view with the aim of simplifying its structure that has been based on rapid growth, according to Europa Press.

Pontegadea Inmobiliaria already owns specific companies in the other countries in which it has a presence, such as in the USA, France, the UK and Korea, which group together the real estate activities of the founder of the textile giant in each case.

Amancio Ortega has entered the bidding, through Pontegadea, to acquire Cepsa’s skyscraper, by placing an offer on the table worth €490 million, according to sources familiar with the operation.

The owner of Inditex is thereby setting himself up to undertake his largest operation in the country to date, in a deal that would rank well above the figure of €400 million that he paid for the iconic Torre Picasso, the building he acquired from Esther Koplowitz almost five years ago.

Then, like now, the businessman approached the operation without the need to request financing from the banks – he has a wealth that differentiates him from the other candidates and enables him to bid slightly below the other interested parties.

In addition to Pontegadea, two other funds have expressed their interest in putting €530 million on the table, according to sources. Clearly, those bids are higher than Ortega’s, but they are linked to certain financial and payment structures that are a long way from offering the guarantees that Pontegadea provides to all vendors.

Thanks to his dividend from Inditex, the businessman receives an annual cheque amounting to €1,100 million, which he uses, almost entirely, to acquire properties. This policy has converted Pontegadea into one of the largest real estate owners in Spain, comparable only with the newly created Merlin-Metrovacesa and Colonial.

Nevertheless, the dimensions of this remuneration mean that it is becoming increasingly difficult for the second richest man in the world to find opportunities in Spain. His interests focus on operations with at least eight zeros in the price, and as a result he has multiplied the number of operations undertaken overseas in recent years. (…)

Despite his financial prowess and the increasing challenge of finding desirable properties, Pontegadea remains faithful to its conservative policy and avoids processes that involve increasing the price in the final stretch.

In fact, its offer for Cepsa falls a long way below the €550 million asking price that the Sheik Khadem al Qubaisi hopes to obtain. The Sheik owns the purchase option over the Madrilenian skyscraper and has until September to exercise it if he wants to stop Bankia from taking over the asset once again. (…).

Nevertheless, Pontegadea is remaining firm in its valuation of the building, a figure that, if they end up closing the operation, will be significantly lower than the €558 million paid by the Philippine Group Emperador to acquire Torre Espacio. Nevertheless, according to several experts in the sector, there are important differences between the two operations, not least the higher risk of having OHL as a tenant rather than Cepsa.

The 248 metre tall skyscraper, designed by Norman Foster, has a leasable surface area of 56,000 sqm, spread over 34 floors. The sale has sparked interest from large institutional investors, such as Invesco, AEW, Deka, Hines, Patrizia, Etoile Properties and Axa.

Two of the largest real estate investors in the world want to buy Edificio España. The US giant Hines and the Philippine group Emperador, which has just acquired Torre Espacio, have already taken up their positions in the sales process launched by the Wanda Group for the skyscraper, according to several sources close to the operation.

The Chinese group has engaged the consultancy firm JLL to find a new owner for the property, which it has decided to sell after failing to reach an agreement with the Town Hall of Madrid regarding the handling of the renovation.

Not even the meeting held yesterday between Manuela Carmena and Laurent Fischler, Wanda’s Global Head of Real Estate, managed to put a stop to JLL’s sales mandate, although the consultancy firm declined to make any comment. This meeting was held at the request of the mayoress, anxious about the earthquake unleashed by the Asian group’s decision to leave Madrid. But the only thing she managed to agree with Wang Jianlin’s envoy was the firm’s willingness to remain in the capital, provided the town hall gives something in return.

Nevertheless, there are only a handful of investors with the capacity to undertake the purchase, which could range between €250 million and €300 million (Wanda paid €265 million two years ago), a quantity to which another €100 million should be added for the subsequent construction work to renovate the property.

And that figure is mounting, because the final cost of the renovation will depend heavily on the agreement that the Town Hall of Madrid approves, and the survival of Norman Foster’s project, who has threatened to take Wanda to court if it breaks the agreement signed to develop the architecture project.

The reality is that Wanda inherited this contract from Banco Santander and in theory, the buyer would also be subrogated to it, according to real estate sources. But that honour has discouraged some of the large international funds from bidding for Edificio España, as they prefer to avoid large firms because they make the construction work more expensive.

Giants in the market

By contrast, the profile of Hines and Emperador fit well, given that their investments typically focus on iconic buildings, located on the main thoroughfares of large capital cities and, in many cases, linked to unique architectural projects. Ingredients which, if the negotiations with the town hall are unblocked, are present in abundance in the case of Edificio España.

The US firm Hines is an expert in this kind of development and is currently involved in a growth plan in Spain, which has led to the signing of two operations – for the Desigual store next to Portal del Ángel in Barcelona and number 44, on Madrid’s Gran Vía – in less than two months, for a combined total of €78 million.

And its future plans are even more ambitious, as shown by the fact that it is actively seeking out large transactions in both Madrid and Barcelona. With $87,000 million (€80,000 million) in assets under management, Hines is the fourth largest real estate investment management company in the world.

Meanwhile, Grupo Emperador is one of many companies that comprise the business empire of the Philippine-born Andrew Tan, one of the richest people in the world according to Forbes. (…).

Despite all of these possessions, Tan was virtually unknown in our country until last November when he acquired Torre Espacio with a bid for €558 million, an amount that he largely financed in cash and with a syndicated loan for €280 million from ING Wholesale Banking.

This operation is just the tip of the iceberg of the group’s plans. Emperador has also set itself the objective of multiplying its investments in Spain, both in the real estate sector, as well as in those markets linked to the world of spirits, where it has worked in conjunction with González-Byass for many years.