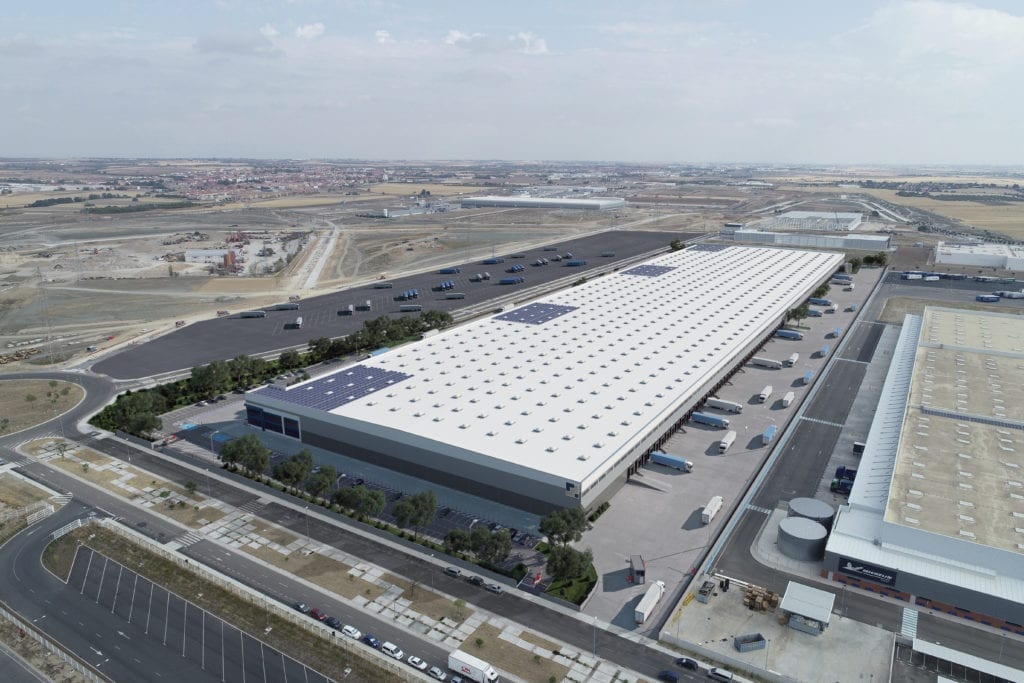 The joint venture between USAA Realco and Mountpark is building an 86,200-square-metre warehouse on the Iberum Central Platform in Illescas (Toledo).

The logistics company Mountpark, controlled by the firms USAA Realco-Europe Holdco and Mountpark, has announced an investment of €70 million to launch a new logistics project called Mountpark Illescas I, located in the town of Illescas (Toledo). “Over the last 2 years we have been buying up land from various owners and now we have enough space to build an XXL warehouse,” explains John Derweduwe, Director of Mountpark for Spain and Portugal, speaking to Brainsre.news.

The project will comprise a warehouse spanning 86,200 square metres on the Iberum Central Platform distribution park, which is located in one of the main industrial corridors of the Spanish market, 35 kilometres from Madrid. The warehouse, which will have a free height of 12 metres and 143 loading docks, has been designed to obtain an “Excellent” BREEAM sustainability certificate. In this way, it will have a roof equipped with photovoltaic panels that, together with a battery system, will generate renewable energy for night shifts.

30 September 2019 – Mountpark is negotiating the acquisition of more than two million square meters of land in the south of Madrid. The developer intends to build a major logistics platform at the site, one with more than 40,000 square meters of surface area.

The company is planning on copying another platform it built recently at the Iberum Central Platform, in Illescas, Toledo. Mountpark built a 44,000-square-meter warehouse for XPO Logistics that H&M is using.

Mountpark Iberia is a part of a joint venture by Usaa Realco-Europe Holdco, the Dutch subsidiary of the US firm Usaa Real Estate, and the Luxembourg-based Mountpark Finco Sarl.

Mountpark is getting a taste for the Iberian Peninsula. The logistics vehicle, specialising in the development of XXL assets, is going to start work on its fourth warehouse in Madrid in the middle of 2020, on a site spanning 100,000 m2, located in the south of the Spanish capital.

Including that plot, the company currently has a portfolio of land in the country that exceeds 330,000 m2, which it expects to expand very soon with new purchases in Barcelona and Valencia, according to explanations provided by John Derweduwe, the Director General of Mountpark for Spain and Portugal, to Eje Prime.

The group does not want to delay its entry into Portugal any longer. “We are on the verge of closing the purchase of a new plot in Lisbon”, said the Director, who added that his firm has been preparing its debut in the Portuguese market for some time. The delay has been due to the difficulty in finding the right plot to develop warehouses measuring between 80,000 m2 and 100,000 m2, which has been Mountpark’s main objective since its creation in 2017.

Whilst it continues to identify new plots on the Peninsula, the company is focusing its efforts on the development of three of the assets that it already owns in Madrid: two spaces in the Iberum Central Platform in Illescas (Toledo), which span almost 135,000 m2 and a third site in Alcalá de Henares, measuring 100,000 m2.

In fact, yesterday, the first brick was laid in Mountpark II, the e-commerce logistics platform measuring 44,000 m2 that the group is building for the logistics operator XPO, with an investment of €30 million.

The space will be leased to the Swedish fashion retail giant H&M from June 2019 and represents a “great opportunity for economic growth in the region”, according to the President of Castilla-La Mancha, Emiliano García-Page, on the first day of construction at the complex (…).

In search of the giants of the future

Mountpark is on the hunt for buyers for its projects in Spain. After signing its first contract with XPO Logistics, the company now has several firms interested in Mountpark I, the second logistics platform that it owns in Illescas, measuring 90,000 m2, as well as the complex that it is planning to construct in Alcalá de Henares.

“Our potential clients fit one of three profiles: logistics operators, large companies in the world of technology and the automotive industry, and retail giants who want to commit heavily to e-commerce”, explained John Derweduwe (…).

The parent company of the Iberian subsidiary led by Derweduwe is Mountpark Logistics, a joint venture between Usaa Realco-Europe Holdco, the Dutch subsidiary of Usaa Real Estate and Mountpark Finco Sarl (Mountpark). The joint venture promotes large logistics buildings across Europe, but with the focus placed primarily on the United Kingdom, Western Europe and Central Europe. Mountpark owns a portfolio comprising 16 assets with the potential to offer more than 1.85 million m2 of logistics facilities in the continental market.

A new macro-operation is on the cards for Plataforma Central Iberum. The logistics developer Mountpark is going to invest €30 million in the development of this enclave to the south of Madrid in an asset measuring 44,000 m2 for XPO Logistics. In turn, the logistics operator has already agreed to rent the space to a large fashion chain, according to explanations provided to Eje Prime by the Director General of Mountpark for Spain and Portugal, John Derweduwe.

This warehouse is being promoted under the turnkey model and it is scheduled for completion and opening in June 2019. The latest-generation asset is going to be located 35 km from Madrid, in the municipality of Illescas, in Toledo. The real estate consultancy Estrada&Partners has been responsible for advising this operation.

The future tenant of the warehouse of Mountpark and XPO, is going to be the Swedish fashion retailer H&M, which will use the platform for its e-commerce logistics. The boom in e-commerce is also the reason why other overseas giants have also set up shop in Plataforma Central Iberum, which has converted the park and its surrounding area into the new prime axis of the real estate logistics market in the centre of the country.

Mountpark is entering a platform where Amazon, Airbus, Michelin and Toyota, amongst others, are already present. Located on a plot spanning more than 3.5 million m2, Plataforma Central Iberum is also the largest eco-industrial park in Spain.

The platform that it is building for XPO will not be the only one that Mountpark is promoting in this park. The company owns a second plot measuring 89,000 m2 in Illescas for which it is currently finalising a rental agreement with a high-profile domestic retailer.

“This project is just the start of an ambitious future for Mountpark in Spain” highlighted Derweduwe. The director, formerly the Vice-President and Administrator of Prologis Spain between 2002 and 2006, is “heavily committed to the south of Madrid”, where he plans to constitute a “significant” land bank to be able to respond to “the new logistics needs of the 21st century”, added the executive.

Specialising in the construction of so-called XXL assets (those spanning a surface area of more than 40,000 m2), Mountpark already owns a 99,000 m2 plot in Alcalá de Henares and is working on another land bank spanning several million square metres.

Regarding the arrival of giants such as Amazon to Illescas, Derweduwe points to the “saturation” of the Corredor de Henares thoroughfare, which is leading to a “change of trend” in which the province of Toledo is gaining a lot of notoriety due to its proximity to Madrid and because “being located in Castilla-La Mancha also has benefits for tenants”, said the executive.

As well as the central area, Mountpark is also looking “seriously” at Cataluña and Valencia (…).

The parent company of the Iberian subsidiary led by Derweduwe is Mountpark Logistics, a joint venture between Usaa Realco-Europe Holdcom, the Dutch subsidiary of Usaa Real Estate, and Mountpark Finco Sarl (Mountpark). The joint venture promotes large logistics buildings all over Europe, but with the focus primarily on the United Kingdom, Western Europe and Central Europe. Mountpark has a portfolio comprising 16 assets with the potential to offer logistics facilities spanning more than 1.85 million m2 in the continental market.