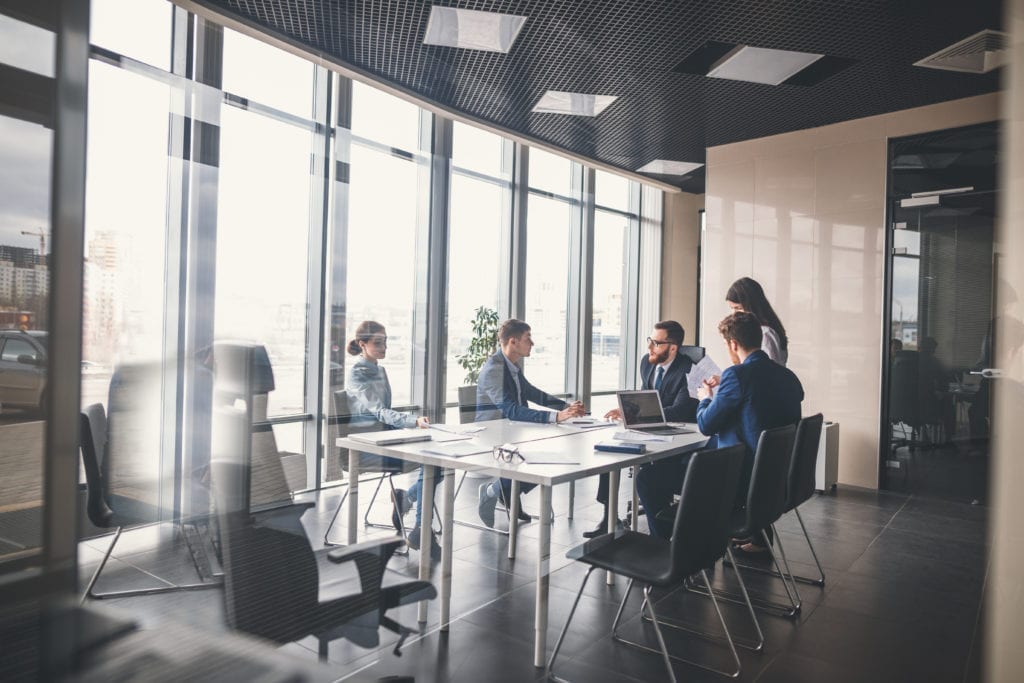 The property acquired by GLL spans more than 16,700 square metres and is leased in its entirety.

Hines has closed the sale of the Bishop’s Square office complex in Dublin for €180 million to GLL Real Estate Partners, according to Property EU.

This office complex was put up for sale a year ago through CBRE. “Following the end of the global financial crisis, our research team identified the Dublin office market as an attractive location and our team there capitalised on their knowledge of the local market to acquire Bishop’s Square,” said Alfonso Munk, President of Hines Global.

After acquiring the asset in 2015, Hines made improvements to the building and expanded it by 2,500 square metres. In total, the property now spans more than 16,700 square metres and is leased in its entirety with an average lease term of 11 years.

14 October 2019 – The boom in e-commerce is sparking a revolution in the logistics markets as industry players seek to increase the speed of deliveries. The ability to deliver goods quickly in cities such as Madrid and Barcelona is leading firms to acquire logistics platforms that are located close to city centres. Market watchers refer to the “last mile” – the final delivery of goods to the customer’s home. Thus, the industrial estates that surround Madrid and Barcelona are slowing being repurposed as logistics platforms. The most sought-after are less than 10 kilometres from the most central neighbourhoods.

In an example of the tendency, the Spanish real estate group Allegra recently finalised the sale of a logistics park in the Marconi industrial estate, to the south of Madrid in Villaverde. The logistics platform consists of two warehouses measuring 9,798 and 7,676 square meters, respectively. The US-fund Hines, one of the four most important real estate management companies in the world, acquired the asset for 22 million euros. It was Hines first investment in the logistics sector in Spain.

According to data from the real estate consultancy JLL, though the price of logistics assets in Barcelona are currently higher than in Madrid, €7/m2 on average, compared to €5.5 in the capital, Madrid is seen to have major potential. The allocation of such platforms soared from 185,000 square meters in the third quarter of 2018 to 290,000 m2 this year, an increase of 48%. JLL also estimates that developers are working on another half a million square meters of platforms in Madrid, compared to 182,000 square meters in Catalonia.

8 October 2019 – Hines, the world’s fourth-largest real estate fund by volume of assets under management, has finalised its first acquisition in the logistics sector in Spain, as the growth of e-commerce continues to roil the market.

The US fund has acquired two last-mile logistics assets in Villaverde, on the outskirts of Madrid, from Allegra. Allegra hired Knight Frank to lead the sale of a portfolio consisting of two warehouses in Villaverde and a plot of land in San Fernando de Henares. Hines paid 20 million euros.

Both warehouses have a 10-year leasing contract with the logistics operator Ontime. The two units have a surface area of ​​9,798 and 7,676 square meters, respectively.

Pryconsa, the Colomer family’s developer, and SVPGlobal, which owns the Benidorm highrise, are bidding to take the last of the three plots being sold by Atlético de Madrid’s Operación Calderón. The first two plots of land went to a joint venture by Azora and CBRE GI, in a deal worth just over 100 millions of euros.

Stoneweg’s partnership with Hines had been seen as likely to win the bidding for the last plot of land, but an unexpected offer from Vivenio and the Dutch fund APG surpassed their bid at the last moment. Talks with Vivenio subsequently broke down when the firm was unable to secure the necessary financing.

Somewhat late to the party, Strategic Value Partners (SVPGlobal) and Pryconsa have both also now also expressed interest in submitting bids. The firms are analysing the asset, which Atlético de Madrid is selling for €3,150/m2. Bids are expected this week.

If neither of the two manages to reach an agreement with the football club, Atlético de Madrid is expected to go back to Stoneweg-Hines and Vivenio for final proposals, looking to finalise a deal shortly.

Henderson Park and Hines have acquired several plots of land in the 22@ area of Barcelona, ​​ to build a 350-bed student residence, a 3,610-m2 office building and a 176-m2 store. The project is the partner’s third development together and is expected to be ready in time for the 2020 student year.

The US firm Hines is holding negotiations with Nike and Victora’s Secret to lease the retail premise in the former headquarters of Banco Popular.

The investment fund acquired the property at number 17 Paseo de Gracia for €90 million in March 2017, and, after completing a €10 million renovation project last year, is going to lease the building’s office space to the coworking group WeWork.

The two retail brands are competing to occupy the prime store, which has a surface area of more than 2,000 m2 and which is being marketed by CBRE.

Hines’s portfolio in Spain comprises fifteen assets, of which ten are located in Barcelona and the rest in Madrid.

The Zurich Group has assured itself of a space in the heart of Barcelona. The Swiss group has purchased an office building in Plaza Cataluña from Sum Capital Spain, the property developer behind OneCowork, a chain of co-working offices that will remain as the tenant of the property, according to explanations provided to Eje Prime by sources close to the operation, whose consideration has not been revealed.

The asset, located at number 9 Calle Estruc, between Plaza Cataluña and Portal de l’Àngel, has a surface area of 1,648 m2. The property is distributed over five storeys with a terrace (and an average surface area of 250 m2 per floor). It will be completely occupied by the coworking chain created by Uri Nachoom, the sole administrator of Sum Capital Spain.

Nachoom is a familiar face in the Catalan capital’s real estate sector as the former co-owner of the Salamanca Group holding company, the firm that relaunched the Marina Port Vell marina and which guided the growth of OneCowork, a company that is going to invest €150 million in the opening of forty centres all over Europe by 2023.

Now, the Israeli businessman has decided to sell this property under the sale&leaseback method, taking advantage of the interest in the Spanish office market from large funds and insurance firms. The operation has been signed through REX Spain, one of the Zurich Group’s subsidiary companies, and has been advised by the real estate consultancy JLL (…).

It’s not all about the 22@ district in Barcelona

The office market in Barcelona is not all about the 22@ district. Although the city’s technological hub accounts for most of the current investments, Zurich’s purchase of the OneCowork building highlights the interest that the city centre is continuing to generate. Other large players such as Hines, Emesa and Pontegadea have benefitted in recent months from the interest of some companies and startups to work in the heart of Barcelona.

At the beginning of October, WeWork leased two spaces in the centre of the Catalan capital (…).

Also, since May, the real estate company owned by Amancio Ortega, Pontegadea, has been the landlord of Lidl in its building in Plaza Cataluña, where the Zara flagship store is also located. In total, the German supermarket chain leases 3,155 m2, distributed over four storeys.

The US group, WeWork, is continuing its conquest of Spain and is getting ready to make its mark in the centre of Barcelona. The company, which specialises in flexible office spaces, will add a new complex to its portfolio in the Catalan capital after signing the lease on a building. The Corner, located at number 444 Avenida Diagonal, owned by Emesa. In parallel, the group is finalising the lease of the former headquarters of Banco Popular on Paseo de Gracia, in a property controlled Hines.

Emesa has owned the property on La Diagonal since 2017, when it paid €35 million to acquire it. The asset had been on the market since the beginning of the year after Cuatrecasas abandoned its traditional location to move to the 22@ district. Emesa had considered the possibility of leasing the building to several tenants, but in the end, it will be occupied in its entirety by WeWork.

In the meantime, the coworking giant is finalising another major operation. The company is close to signing the lease on the former headquarters of Banco Popular on Paseo de Gracia, a building that has been owned by Hines since March 2017, which paid €90 million for it.

Spaces, one of WeWork’s main rivals, expressed interest in that building in July. Nevertheless, sources at the company indicate that its operation never materialised. The building, located at number 17 Paseo de Gracia, has a surface area for offices and a retail premise, and has just been renovated by its owner.

With these moves, the US giant is taking positions in the centre of Barcelona; until now it had focused its presence on the 22@ district. In May, WeWork leased 4,500 m2 of space in the WIP building, owned by the Swiss fund Stoneweg.

That building is located next to the first complex that the group opened in Spain, in the Luxa building on Calle Tánger of the technological district. In Madrid, WeWork operates a space at number 43 Paseo de la Castellana, another at 77 on the same street, and a third at number 27 Calle Eloy Gonzalo.

Companies specialising in the management of these types of work spaces are revolutionising the office market all over the world. WeWork and Spaces are just two of the largest players on the global stage and both arrived in Spain in 2017.