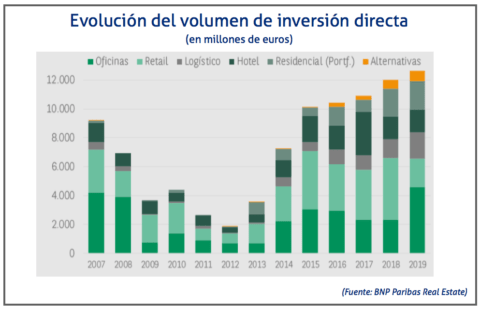 According to data compiled by BNP Paribas, investment in the Spanish logistics sector amounted to €1.85 billion in 2019, which represented a new record, for the fifth consecutive year, and an increase of 42% YoY. The rise was driven by the boom in e-commerce and the attractive returns in the segment.

During Q4 2019, investment in the sector amounted to €545 million with prime yields falling to 4.90%. Notable transactions during the quarter included the sale by GreenOak to Patrizia of the largest logistics portfolio in Europe for €1.3 billion (€225 million in Spain); and the acquisition by Roebuck of the Pikolin logistics platform in Zaragoza for €78 million.

10 December 2019 – Patrizia has finalised its acquisition of a major portfolio of logistics and industrial assets, including 42 buildings and projects under development in Europe. Of those, eleven, or almost a third, are located in Spain.

The company agreed to pay the US fund BentallGreenOak €1.2 billion euros for the portfolio, which includes 309,000 square meters of space in Spain, out of a total of 1.4 million square meters of pre-existing space for rent, and another 138,000 additional square meters under development.

A group of institutional investors including both a Danish and a Korean pension fund, alongside Patrizia’s Logistik-Invest Europa II fund.

19 November 2019 – The US fund Starwood Capital is set to finalise a deal to acquire the Las Mercedes business park for somewhat more than 200 million euros. Starwood had been considered the favourite to acquire the asset from BentallGreenOak (formerly GreenOak), its owner since June 2016.

GreenOak purchased the asset in 2016 for €140 million from Standard Life Investment. The firm subsequently undertook a major renovation of the asset to reposition it. The consultant CBRE advised the seller.

The Las Mercedes business park, which is held under the socimi GoMadridBenz, is located at Calle Campezo 1, across from the Barajas International Airport. The asset has a surface area of 79,000 square meters, including nine buildings, 1,650 parking spaces and an occupancy rate of 84%. Its tenants include Altran, Xerox, Enaire and the Spanish State Medicines Agency.

8 October 2019 – GreenOak announced that it was close to finalising a deal to sell a pan-European portfolio of logistics assets to Patrizia, the German real estate investment giant. The German group is in exclusive negotiations with the US fund to acquire the portfolio for roughly €1.3 billion. The two firms expect to finalise the transaction before the end of the current fiscal year.

The portfolio consists of 1.5 million square meters of logistics assets, which the US firm acquired over the last three years for its second pan European logistics fund.

At the same time, GreenOak is acquiring assets for its third fund. In April, the US fund acquired 40,000 square meters of logistics space in the town of Seseña from Pavasal.

Las Mercedes is made up of nine office buildings, an underground car park and a restaurant and leisure area, and currently has about thirty tenants, including the Spanish Medicines Agency, Enaire, Altran Innovation, Appus Norcontrol, Ibermática and Xerox Spain.

The U.S.-fund Starwood Capital is negotiating the possible acquisition of the Las Mercedes business park at Calle Campezo, 1, across from Madrid’s Barajas airport.

The 9-building office park belongs to GreenOak, which acquired the asset from Standard Life Investments for approximately 140 million euros just three years ago.

Las Mercedes has a total surface area of ​​79,000 square meters and the nine-building complex surrounds a garden area with courtyards and fountains. Occupancy currently stands at 84%, and existing tenants include Altran, Xerox and Enaire, with retail stores and food services.

According to market sources, Starwood has offered more than 200 million euros for the asset and is considered the likely winner of the sale.

GreenOak has once again launched an initiative to acquire logistics assets in Spain. The fund founded by John Carrafield has reached an agreement with Pavasal to acquire 40,000-square-meter project it recently in Seseña, Toledo. Pavasal acquired the land on which it will build a 30,000-square-meter warehouse and will sell the finalized project to GreenOak in the middle of the coming year.

Gore Spain, the Socimi owned by the US fund GreenOak, has sold a warehouse located at number 208 Avenida Andalucía in Valdemoro (Madrid) for €9.75 million, according to reports made by the company to the Alternative Investment Market (MAB).

The warehouse has a leasable surface area of 24,449 m2, comprises two above-ground floors and is located just 27 km from the centre of the Spanish capital.

The asset has been vacant since July 2016 and owned by Gore Spain since February 2017, which purchased it from Goodman. The identity of the buyer on this occasion has not been revealed.

GreenOak is providing gas to its second Socimi. The US fund has carried out two capital increases in GreenOak Spain Holdings Socimi, one amounting to €864,255 and another amounting to €315,000, which together total €1.2 million, as published in the Official Gazette of the Mercantile Registry (Borme).

The company, founded in 2010 by three former directors of Morgan Stanley, currently has three Socimis in Spain. The first of them was Gore Spain Holdings, constituted in 2014 and listed on the Alternative Investment Market (MAB) since January 2017.

Currently, that company is the owner of around twenty assets, including an industrial warehouse in Valdemoro (Madrid), an office building in Alcobendas (Madrid) and a complex of four buildings in the Avalon business park (Madrid).

GreenOak Spain Holdings Socimi II is the second company that the US fund constituted in Spain, specifically in June 2016. That company specialises in the acquisition and development of real estate for subsequent rental, and was created with the objective of investing €900 million by 2020 in various types of assets located in Madrid, Barcelona, Valencia and Zaragoza, as revealed by Eje Prime.

Until now, GreenOak’s second Socimi in Spain has only undertaken operations in the residential market, although it does not rule out making acquisitions in the office and logistics segments, in particular in Valencia and Zaragoza.

One of the most recent transactions carried out by GreenOak Spain Holdings Socimi II was its purchase of the former Social Security building on the central Madrilenian street Calle Fuencarral for €21 million. For that, the company closed seven capital increases in just over two years, amounting to €6.7 million in total.

In addition to GreenOak Spain Holdings Socimi II and Gore Spain Holdings, the fund led by John Carrafiell, Sonny Kalsi and Fred Schmidt has a third Socimi in Spain. It is Go Madrid Benz, a company that has been listed on the stock market since last September.

That company has a single asset in its portfolio: the Las Mercedes business park (pictured above) (…).

GreenOak is continuing to be very active in the office market in Madrid. The US fund has purchased a building in the centre of the Spanish capital at number 123 Calle Claudio Coello in the Salamanca neighbourhood. The news was revealed at the same time as the company is finalising the sale to Barings of its office portfolio on the Avalon business park.

The property on Claudio Coello has a surface area of more than 4,000 m2 and is distributed over seven floors, as well as two underground floors for parking. GreenOak’s intention is to subject the asset to a comprehensive renovation once it has taken ownership, according to PropertyEU.

Similarly, the US fund plans to include this building in the portfolio of a new Socimi that it has created in Spain and which will debut on the stock market soon. The co-founder of GreenOak, John Carrafield, said that “Madrid continues to offer exceptional opportunities for investment in offices”, given that the city is maintaining rental prices that are still “well below the peaks of the past”, even though it is “immersed in a period of strong economic growth”.

Since 2013, GreenOak has raised €1.5 billion for investments in Spain, where it has purchased twenty buildings (17 in Madrid and three in Barcelona), with a combined office surface area of 150,000 m2.