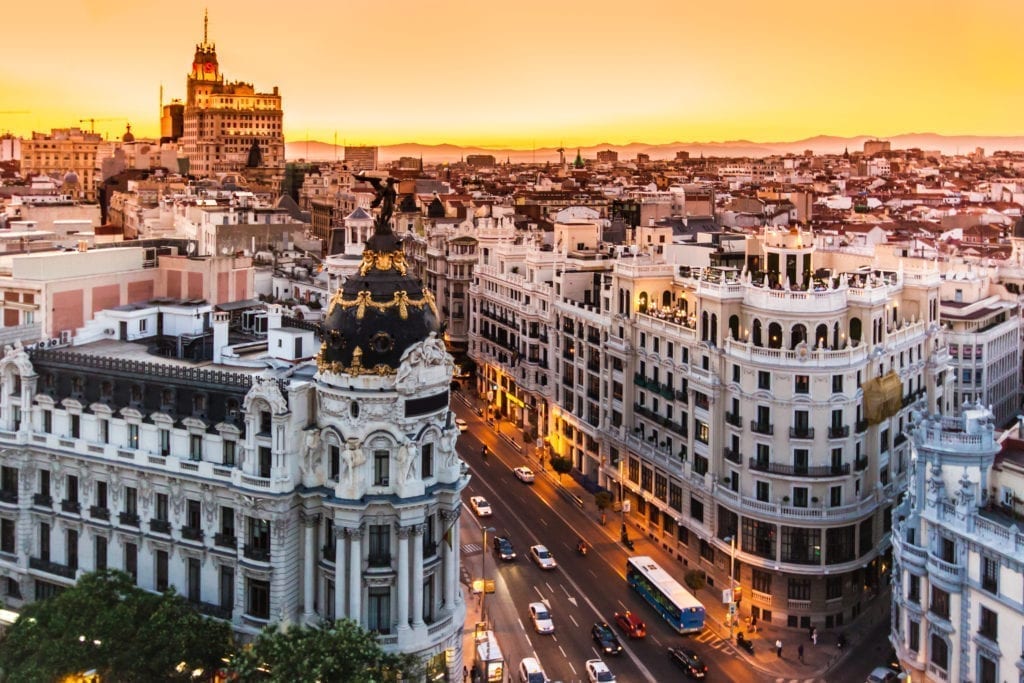 Number 52 of the Madrilenian street is going to house the first establishment of an international Asian operator, in a space spanning 620 square metres. This operation has been signed during the State of Emergency.

Madrid’s Gran Vía is retaining its appeal to international operators during the State of Emergency. The property at number 52 of the famous thoroughfare is going to house the first establishment of an international Asian operator, in a space spanning 620 square metres.

The property, which previously housed the first McDonald’s in Spain, has now been leased, in the midst of the Covid-19 crisis, by the Chinese restaurant operator Haidilao.

The building work that has been approved by the Urban Planning department will affect a total of 6,650 square metres and will take 24 months.

The project backed by the Fundación Montemadrid to reopen the ‘Palacio de la Música’ (Music Palace), located on Madrid’s Gran Vía, has obtained the necessary license for the renovation work that will allow it to reopen as a theatre, after being closed for almost 12 years. During the crisis, the capital’s main thoroughfare went from having 13 cinemas and theatres in operation to just three in only a few years.

The Activities’ Agency granted the licence last Friday 24 April, so that, when the situation permits, work can begin on the “restructuring, refurbishment and restoration of the interiors and exteriors” of the property located on Gran Vía 35, which is a listed building.

The Socimi Inbest Prime, owner of the commercial space on the lower floors of the emblematic Madrid building, is considering reducing the commercial area to ensure its rental income.

It was the great retail operation in the centre of Madrid. Inbest Prime II, the commercial asset Socimi created by the Spanish manager Corpfin Capital, reached an agreement with the hotel chain RIU at the beginning of last year to buy the commercial space in ​​one of the most emblematic projects that was being developed at the time in the capital: Edificio España.

The famous skyscraper located in Plaza de España had been in disuse for more than a decade until the Chinese group Dalian Wanda decided to buy it in 2017 from its then-owner, Banco Santander, with the aim of recovering its former use as a hotel. However, the problems associated with its refurbishment, including the refusal of Madrid City Council to allow the dismantling of its protected façade, led Wanda to withdraw from the project. The Mallorcan hotel group RIU took it on and months later, in January 2019, reached an agreement with Inbest Prime II, the Socimi created by Corpfin Capital, to sell the lower floors of the building so that they could be convert into one of the best shopping areas in the capital, at one end of Madrid’s greatest commercial thoroughfare, Gran Vía.

19 November 2019 – CBRE Global Investment Partners and IBA Capital announced their intention to sell the property located at Gran Vía 18, in Madrid for an estimated 70 million euros. The two firms acquired the asset in 2017 for €44 million and have since implemented a major renovation.

The building, which is on the corner of Calle Clavel, will become a mixed-use retail and office building. The retail side of the asset, which has a basement and seven above-ground floors, is large enough to accommodate a flagship store of a major retailer.

This week, RIU announced the opening of its first hotel in Madrid after almost two years of renovations and a total investment of between 380 and 400 million euros.

The RIU Plaza España hotel on Madrid’s Gran Vía has 585 rooms and 5,000 square meters of event facilities, including 17 meeting rooms.

Greystar Real Estate Partners has inaugurated its expansion plan into the residential rental market in Spain with the acquisition of the property on Madrid’s Gran Vía, 48, containing 100 residential units, for an undisclosed sum.

The operation represents the real estate investor’s second acquisition in the country after it purchased the Spanish student residence operator Resa in 2017 through a joint venture with the fund AXA Investment Managers and CBRE Global Investment Partners.

Greystar has four new build projects under development across Spain, comprising 1,000 beds in total, in cities such as Madrid, Málaga and Pamplona.

Utopicus is planning to add six new centres to its portfolio in Madrid and Barcelona over the next year taking the total number of centres to 13, which will together span a surface area of 36,000 m2.

On Monday, the coworking company controlled by Colonial will open its large, long-awaited office on Gran Vía 4, where it will occupy the entire building (spanning 5,000 m2 in total).

In addition to Gran Vía, over the coming months, Utopicus plans to open centres in Parc Glories and Gal la Placidia, in Barcelona and on Paseo de la Castellana 163, Jose Abascal 56 and Paseo de la Habana, in Madrid.

According to Rafa De Ramón, CEO of Utopicus, coworking is a phenomenon on the rise. Currently, coworking spaces span 150,400 m2 in Barcelona and Madrid, which accounts for between 0.5% and 1% of the total office market. That figure is expected to grow by between 5% and 10% over the next few years.

Madrid and Barcelona are two of the most attractive cities in the world for retail. The two Spanish cities rank amongst the forty most attractive places for commercial activity, according to the Hot Retail Cities report, compiled by Modaes.es, with the support of Tendam and in collaboration with Instituto de Empresa.

The top 3 of the ranking features New York, Los Angeles and Singapore. Madrid and Barcelona are ranked ahead of metropolises such as Milan and Moscow, boosted by factors such as economic openness, the socio-economic environment and the presence of international operators. Moreover, in the fashion category, the two cities are also cradles of some of the world’s retail titans, such as Inditex, Mango and Tendam, and they are home to one of the largest European department store groups, El Corte Inglés.

Barcelona is ranked at number 29 on the list, scoring 425 points out of a possible total of 1,000. Tourism, the presence of fashion operators in the city, the commercial streets and their structure and geographical location are the key factors that place Barcelona within the top thirty hottest cities on the planet. In recent years, the city has become a gateway for major international retailers, such as Uniqlo, which chose the city for its debut in Spain.

Meanwhile, the Spanish capital is positioned at number 36 in the Hot Retail Cities ranking with 410 points. In the case of Madrid, factors that work in its favour include commercial openness, economic stability and recovery, and the multiplicity of prime thoroughfares such as Calle Serrano, Gran Vía, Fuencarral and Calle Preciados.

The criteria for compiling the ranking are grouped together under eight general points that companies assess when it comes to studying the city: demographics, economy, politics, socio-economic environment, tourism, retail, fashion and trendy cities. In addition, analysis criteria are included about the more or less optimal conditions of each city for international retailers.

Thanks to the significant investments carried out in recent years, the investment fund Hispania has become the largest hotel group in Spain. It has outperformed traditional companies in the sector such as Meliá, HI Hoteles and Hoteles Globales in terms of the number of establishments and rooms. At the height of its expansion phase, boosted at the end of last year by the purchase of the Alua chain – which saw it acquire seven resorts in the Canary Islands and the Balearic Islands for €165 million – it has set its sights on Bilbao. Just a week after another high-profile fund, the Madrid-based Millenium Group announced its intention to convert Banco Santander’s headquarters on Gran Vía into a luxury hotel, Plaza Circular is now going to witness the transformation of one of the Bizcayan capital’s most iconic buildings: the site that formerly housed Café La Granja.

The hostelry establishment, which started life on 31 July 1926 and which was acquired by the real estate firm Navarra Fitbox two years ago, has been closed since 8 February 2017 when, unexpectedly, it pulled down its shutters for the very last time. The insurance company Helvetia sold the property for almost €7.5 million. After 90 years of uninterrupted activity, the historical café has only re-opened its doors since then on a sporadic basis to host one-off events of a cultural nature, such as book fairs. The offices and insurance companies that used to occupy the upper five floors have been evicted, starting back in 2010 (…).

Hispania is going to strengthen the hotel supply in Bilbao, which is experiencing a genuine frenzy, with the planned opening of seven new properties over the medium term. The fund has been planning its debut in the town for a while, but its intentions have always focused on this area, which will draw a new Bilbao with the arrival of the fashion giant Primark and the launch of the Regional Government’s international entrepreneurship centre in the former BBVA tower, which was sold for €100 million two weeks ago. The arrival of the AVE and the strong commercial positioning have pushed up prices considerably in this area. Like in the case of the building work to be carried out on the site of Santander’s former headquarters, the transformation of La Granja will have to be approved by the Town Hall’s Heritage Committee, which has not yet assessed the project, given that it is an artistic building. That procedure may be completed this month (…).

Sfera is freeing up 1,000 m2 of space in the centre of Madrid. In September, the fashion chain owned by El Corte Inglés is going to abandon the store it currently occupies on Gran Vía, with a useful commercial surface area of 600 m2. The company has decided not to renew the rent that tied it to the recent purchaser of the building, the US fund Thor Equities.

Located at number 30 on the Spanish capital’s main commercial thoroughfare, surrounded by competitor brands (Inditex, H&M, Tendam and Primark, amongst others), the store is no longer of interest to Sfera, which has justified its departure on the basis of the small size of the store for the exhibition model that it is developing, according to Cinco Días. The chain has occupied this three-story establishment (comprising the first, ground and basement floors) since 2005.

Sfera is immersed in a process to renovate and reorganise its business plan for its commercial activity in the centre of Madrid. The company recently remodelled its store at number 4 Calle Preciados, which has a surface area of 2,500 m2 spread over five storeys.

The objective of the chain is to strengthen the presence of its store on Preciados so that it will become the firm’s flagship store in the centre of Madrid. Similarly, Sfera is going to start work soon on the renovation of its store at number 56 Calle Fuencarral. The company’s portfolio of retail assets in the centre of the Spanish capital is completed by a second establishment at number 118 Calle Fuencarral and the concession stands it has in the El Corte Inglés stores in the area.

In total, Sfera renovated 26 of its stores in Spain in 2017. With a presence in 15 countries besides Spain, where it opened its newest store just a few months ago in Fuengirola (Málaga), the chain is investing considerably in the international real estate market. The clearest example is Mexico, where the firm has 45 stores, all operated as franchises.