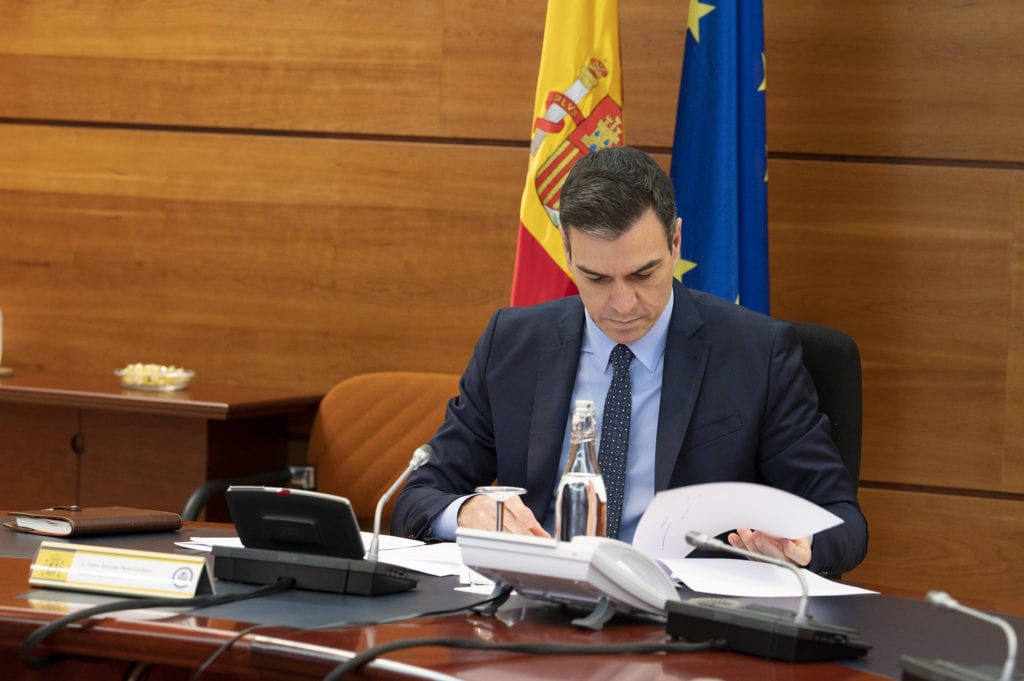 The Government is going to take its proposal to the European Council to create a fund amounting to between €1 trillion and €1.5 trillion to boost the economic recovery after the pandemic.

The Government is going to take its proposal to the European Council to create a fund amounting to between €1 trillion and €1.5 trillion to boost the recovery after the coronavirus pandemic, focusing on infrastructure and tourism.

The fund would be used to finance reconstruction initiatives with a special focus on the sectors most affected by the cessation of activity and the lockdown measures, such as transport and tourism.

The sale has been completed of a former student residence in A Coruña. The congregation of the religious order of María Inmaculada has sold the property, which spans 6,000 m2 and comprises 6 or 7 storeys (depending on where you are in the building), to the real estate firm ASG Homes Propcorp for €7.7 million.

The group is in the process of investing the resources that it raised for its sixth fund, which amounted to €500 million in total, and the focus of its investments is now directed towards Valladolid, Zaragoza, Bilbao, Portugal… and A Coruña.

The international group specialises in the construction of residential complexes, and also promotes hotels, shopping centres and gas stations.

The property is currently divided into two halves, with the right-hand side forming the subject of the sale by the religious order; the left-hand side, which comprises commercial premises on the ground floor, offices on the second floor and private apartments on the upper floors, does not form part of the sale.

Housing and the need for public-private partnerships to build affordable homes was one of the hot topics during the recent election campaigns. But the reality is that the public administrations do not have the resources to fund any substantial residential programs.

In addition, Spain has traditionally been a country of homeowners and so most of the few affordable homes that the state has been building have been sold rather than put up for rent. This represents a major problem for the growing population of renters in the country, which some estimate currently account for 23% of total demand, compared with the European average of 34%. The Bank of Spain’s official figure for 2017 was 16%. Regardless, private companies are entering the market to fill the gap.

One such example is Azora, which has been managing social housing for rent since 2004 through its fund Lazora. It estimates that Spain needs 2.5 million mostly affordable rental homes to bring it in line with the European average. That would require an investment of approximately €300 billion over the next few years, a mammoth figure.

Azora actually sold its Lazora portfolio, containing almost 7,000 homes (private and social) to CBRE and Madison in 2018. They committed to continue investing capital in the sector and have already committed more than €200 million in various projects to build 1,200 more homes.

Azora still manages almost 14,000 social and private rental homes across the country and has recently been joined in the sector by the property developer AQ Acentor, the real estate arm of the German fund Aquila Capital. Specifically, AQ Acentor is planning to build 1,450 VPO rental homes in Villaverde, Barcelona, Valencia and Málaga. The numbers are not huge but they will go some way to plugging the gap.

Azora considers that more institutional investment is required to make up for the housing deficit and that “to attract such capital, we need solutions and policies that promote and facilitate the construction of new rental homes”. It remains to be seen whether the politicians can put their ideological differences aside and come up with a clear and consensual housing policy for the benefit of the country at large.

Stoneweg is joining the rental home development market. The fund is going to build a 300-home tower block on the land that it purchased from Dragados, the subsidiary of ACS, on Paseo de la Dirección in Madrid. The operation will amount to €130 million.

The company is holding advanced negotiations with the manager Ares and the US group Greystar, which specialises in student halls, regarding the development. Ares had been the favourite to acquire the tower but now Greystar is gaining ground.

Stoneweg purchased the plots from Dragados with the aim of building two residential blocks containing 600 homes in total. The first block will be handed over as a turnkey operation containing rental homes, whilst the second will contain homes with asking prices of €4,500/m2.

Bain Capital has created a fund to invest €1.25 billion in European real estate. The US investment group is expected to concentrate a large part of that investment in Spain, where it already controls the property developer Habitat.

The target of the new fund will be portfolios of non-performing loans and non-strategic assets, of which there are plenty in the Spanish market.

Bain Capital has acquired several portfolios from financial institutions in Spain in recent years with a gross value of €3.5 billion.

Axis Retail Partners – that is the name of the new investment vehicle focusing on shopping centres that Generali has just launched. The insurance company holds a 51% stake in the company, which is going to invest €500 million in high-quality shopping centres across Europe.

The vehicle is expected to create its first fund, Generali Shopping Centres, during the second quarter of 2019, once the necessary approvals have been obtained. The fund’s expected annual return is 7%.

ARC Homes is expanding in Spain. The property developer, which has been present only in Barcelona until now, has created a €50 million fund with the aim of launching residential developments in municipalities with more than 100,000 inhabitants located in different parts of the country.

The company has started its search for land in locations as diverse as Galicia, Asturias, País Vasco, La Rioja, Navarra and Valladolid, according to EFE. To begin with, ARC Homes has already started work on two projects comprising 43 homes in Girona, with a total investment of €14 million.

Currently, the province of Barcelona is the company’s main market given that it accounts for more than eighty homes under development and a portfolio of land for the construction of another 180 units. The company says that it is looking for new buyer profiles such as millennials, who may be interested in assets located in areas connected with large Spanish cities.

Tristan Capital Partners, together with its local operating partner Savills Investment Management, has acquired a portfolio of offices spanning 78,000 m2 in Madrid from the Socimi Inmobiliaria Colonial for the added value fund Episo4.

The portfolio comprises six Grade A office buildings located in established sub-markets outside of the Spanish capital’s business district: Campo de las Naciones, Josefa Valcárcel (A2) and Arroyo de la Vega (A1), as well as Agustín de Foxá, in the district of Chamartín. The portfolio offers immediate and large-scale exposure to the office market in Madrid, as well as a well-diversified tenant mix, and has the capacity of capturing an expected increase in rents.

Nikolay Velev, CEO of Tristan Capital Partners, said: “After several years of solid economic growth, job creation and a shortage of new developments, an imbalance has been generated between supply and demand in the office market in Madrid, which has resulted in a high net absorption of space and a considerable growth in rents. This trend has been particularly strong inside the M-30 and the differential in rents between offices located inside and outside the central district is now at a historical high. We hope that this gap will be reduced over time”.

The local operating partner will be Savills Investment Management with which CCP 5 LL (Tristan’s core-plus fund over the long term) successfully completed the acquisition of the Manoteras business park (Madrid) in 2017 for €103 million.

Fernando Ramírez de Haro, Head of Savills Investment Management in Spain, stated: “We are delighted to expand our relationship with Tristan through this portfolio. The buildings are of an excellent quality and are highly energy efficient. Moreover, they offer modern and flexible spaces, making them ideally positioned to capture the increase in rents and the growth that is expected to take place outside the M-30”.

The office market in Madrid is just a few days away from seeing the completion of a deal that is shaping up to be the largest operation of the summer. The British fund Barings is finalising the purchase of five office buildings owned by Meridia Capital in the Avalon business park, which have a total surface area of 25,785 m2, according to confirmation provided by sources close to the operation speaking to Eje Prime.

The American fund Starwood Capital was also a finalist in the bid for this portfolio of assets, but in the end, Barings has fought off the competition to seal the deal. The total amount of the operation has not been revealed, but the transaction is expected to be signed within the next few days. The real estate consultancy firm Savills Aguirre Newman is advising Meridia on the sale.

Located in the Julián Camarillo district, the new tech area of the Spanish capital, the Avalon business park comprises nine buildings and spans a total surface area of almost 47,000 m2. The rest of the properties in the complex are owned by GreenOak, which purchased its four assets from Banco Santander in 2015 for €40 million.

That same year, Meridia also completed its entry as an owner of the Avalon properties. In May 2015, the Catalan fund, led by the businessman Javier Faus, acquired the five Madrilenian buildings, as part of its purchase for €60 million of 33 assets from Naropa Capital, the family office owned by the Fernández Fermoselle family. The offices in Julián Camarillo were the main assets in the portfolio, but it also included commercial premises, residential properties and even a plot of land in Valencia.

With this operation, Barings is acquiring five assets that, in addition to a vast office space, have 423 parking spaces in a highly sought-after area of Madrid, close to the Adolfo Suárez-Barajas airport.

Barings is on fire in the Spanish real estate market. This latest operation that it is on the verge of signing in Madrid follows several others that it has closed over the last year, to take advantage of the new upward cycle in the real estate sector.

Nevertheless, Avalon is the first large portfolio that the British fund has purchased in the Spanish office market. Barings is, therefore, diversifying within the real estate sector, where it has made investments in the logistics and retail segments in recent months (…).

€23 million more for new purchases and to create a Socimi

In the framework of its new roadmap for the Spanish real estate market, Barings carried out a capital increase amounting to €23.1 million last February for its Spanish subsidiary Barings Core Spain.

The reason for this reinforcement to its financial muscle resulted from the British fund’s interest to convert the company into a Socimi. The group’s intention is to combine all of the assets owned by Barings in Spain in this new vehicle and to list it on the Alternative Investment Market (MAB) over the coming months, as revealed by Eje Prime.