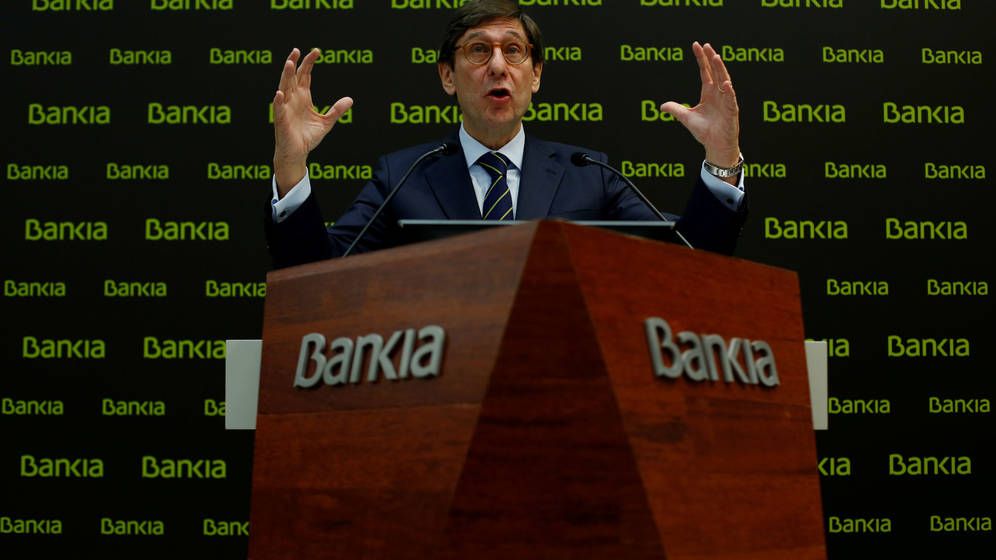 Bankia has sold a portfolio of doubtful assets worth €37 million to the London-based fund LCM Partners. The portfolio, called Marshmello, contains more than 170 secured loans granted to SMEs and distributed primarily in Madrid, Cataluña and Murcia.

The deal is the first that the partially nationalised financial entity has completed through the Débitos platform. Débitos is a German fin-tech that works in association with Beka Finance in Spain to allow financial entities and companies with unpaid amounts on their balance sheets to offer portfolios for sale to institutional investors.

Kutxabank has sold a “problem property developer loan” portfolio with a gross valuation of €700 million to a subsidiary of Bain Capital Credit. The portfolio includes doubtful assets and non-performing loans to property developers, according to a statement issued by the entity chaired by Gregorio Villalabeitia (pictured below).

The divestment includes both loans with mortgage guarantees, secured by land for the most part (48% of the total), as well as finished homes (another 29%). They are located in Andalucía and Euskadi.

The transaction has materialised through a competitive bidding process, which has been coordinated by the investment bank Alantra.

Sources at the vendor bank indicate that there is “a great investor appetite” in the market for this type of asset at the moment, a situation that has encouraged the entity to take the decision to divest these assets, the first operation of this kind that it has undertaken in its history.

The divestment will improve Kutxabank’s results this year and will reduce its exposure in the courts, due to the costs associated with the litigation relating to these assets. The bank has already calculated that, following this operation, its default ratio will improve by 50 basis points to fall below 4%.

The sale of the real estate portfolio will also have a positive impact on the bank’s CTE 1 capital ratio, which will increase by 10 basis points. According to the bank, it will thereby consolidate its position of leadership as the most solvent entity in the country.

Bain Capital Credit, with 200 employees, invests in the entire spectrum of loans, including leveraged loans, high-yield bonds and structured products, amongst others. Bain Capital has been advised in this operation by Copernicus, Aura, JLL and Allen & Overy.

Sabadell has become the most determined Spanish entity when it comes to trying to clean up its balance sheet. The entity chaired by Josep Oliu (pictured above) has two portfolios up for sale through which it hopes to sell off €1,300 million of non-performing assets. Moreover, it may soon add another €1,700 million portfolio, if a large deal that the entity is currently preparing eventually goes up for sale. In total, €3,000 million, of which €2,200 million comprises doubtful loans linked to real estate developments, and which represent around one sixth of its doubtful assets in Spain. The remainder, €800 million, relate to non-performing consumer loans.

The latest divestment to come onto the market is Project Pirene, advised by KPMG, containing €460 million of problem assets linked to property developers, according to sources consulted at international funds. Unlike some of its recent operations, this one originates from Sabadell’s own business, and not from CAM, Caixa Penedès or Banco Gallego.

The Catalan group hopes to close the first two operations within the next two months, so that they may be accounted for in its financial statements for the first half of the year. Meanwhile, Project Normandy may be delayed somewhat due to its large size. In fact, the operation would be one of the largest seen in Spain in recent years. The largest, Project Big Bang, containing €4,800 million in foreclosed assets, was suspended by Bankia due to its complexity and the large discounts being demanded by the funds.

Sabadell was one of the Spanish entities that reduced its default rate by the most during 2015. Following the purchase of the British bank TSB, its default rate fell by almost five percentage points. If we exclude that acquisition, the rate fell by almost three percentage points, from 12.74% to 9.86%. In total, the entity manages €21,500 million of problem assets, with a coverage ratio of 53% for its doubtful debts and of 44% for its real estate assets.

Besides these operations launched by Sabadell, only a handful of other entities have decided to divest their problem assets so far in 2016, namely Cajamar, Bankia and BBVA. Popular announced that it would be very active, but it has not yet put any portfolios on the market.

Spanish financial institutions held doubtful and foreclosed assets amounting to €224,000 million on their balance sheets as at June 2015, according to data published by the Bank of Spain in its latest Financial Stability Report.

In its report, the body led by Luis María Linde (pictured above) warns that these unproductive assets are placing “negative” pressure on entities’ income statements, reducing their ability to generate profits, since they do not generate any revenues. These two types of assets represent 8.7% of the total assets of the banks in Spain.

Nevertheless, the volume of assets foreclosed or received in lieu of debt payments from businesses in Spain, held on the financial institutions’ balance sheets decreased by 0.9% in the last year to amount to €81,000 million. (…).

Meanwhile, at the consolidated level, the total amount of refinanced or restructured credit increased to €211,000 million as at June 2015, of which 52.1% related to non-financial companies and 45.2% corresponded to households.

2.4% of the total related to loans to Public Administrations, whilst the remaining 0.3% corresponded to financial companies other than credit institutions. The total volume of loans to the private sector that had been refinanced or restructured amounted to €163,800 million in June 2015, i.e. 15.8% less than in the same month a year earlier.

The Bank of Spain said that this variation represents an acceleration in the decrease seen over the life of the index, which began in March 2014. The decrease in the volume of refinancings and restructurings over the last year has been centred around non-financial companies (17.5%) and households (13.5%).

Meanwhile, the weight of refinancings and restructurings over the total credit balance has also decreased in recent quarters to account for 13% in June 2015, compared with 14.2% in the same month a year earlier.

In terms of the distribution of refinanced operations by sector, 64% corresponded to loans granted to companies, whilst the remaining 36% related to household debt.

Half of the refinanced operations relating to companies corresponded to loans granted to companies operating in the construction and real estate sector.

Finally, 26.2% of the restructured operations relating to households corresponded to loans granted to finance house purchases.

The NPL ratio of Spanish banks decreased by 17 basis points in November, to reach 12.77%, its lowest level since September 2013.

The default rate declines in November, for the third consecutive month. The NPL ratio of banks, cajas, credit cooperatives and other financial entities dropped by 17 basis points to reach its lowest level since September 2013. The default rate of the sector as a whole, including companies such as the ICO (Official Credit Institute), amounted to 12.75%.

There was also good news on the credit side, which recorded a month-on-month rise of €6,014 million, although it was still down by 5.6% year-on-year. We have not seen a lower rate of decline since August 2012, which indicates that the “closed credit tap” is gradually starting to open.

The default rate in the banking sector peaked in December 2013, when it reached 13.689%. Last October, it fell below 13% for the first time since then. Experts and banks predict that the downward trend will intensify this year, although they point out that, whilst credit balances continue to fall, the reduction in doubtful assets will be transferred more slowly to the NPL ratio.