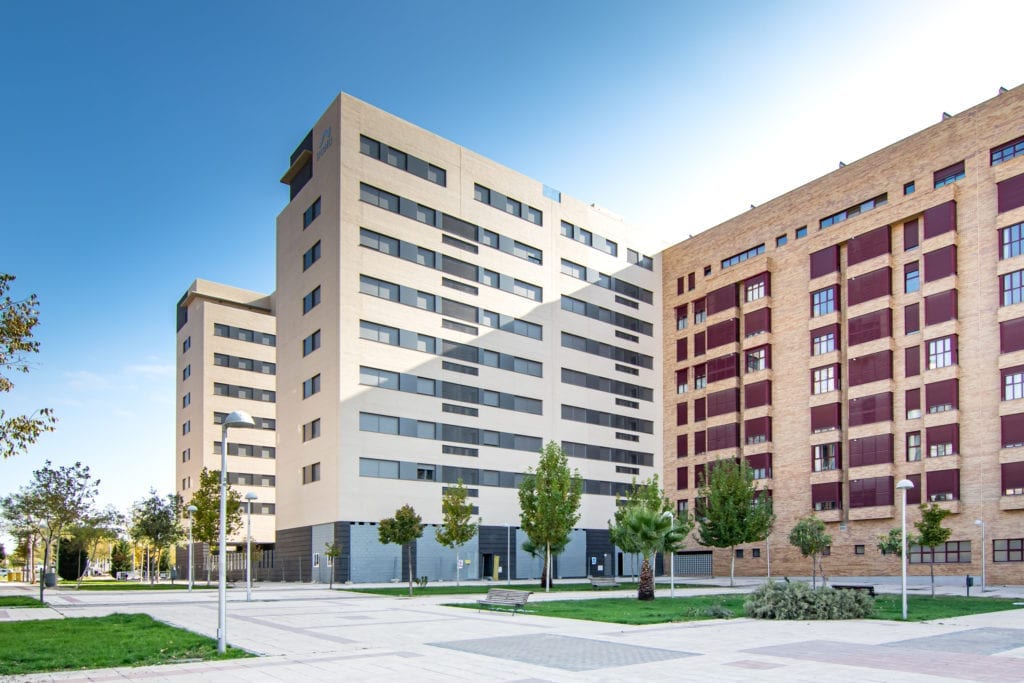 The property has a surface area of more than 15,182 square metres, distributed over 80 homes, six commercial premises, 106 parking spaces and common areas.

The fund manager Catella, through Catella Residential Investment Management and Catella Real Estate AG, has confirmed the purchase of a block of rental homes in the Madrilenian neighbourhood of Vallecas from the Socimi Domo Activos for €25.5 million, as revealed by Brainsre.news.

The Socimi announced the sale of a residential building located in the Vallecas neighbourhood of Madrid, through a statement to the MAB. The property, located on Calle Arte Figurativo, has a surface area of more than 15,182 square metres, distributed across 80 homes, six commercial premises, 106 parking spaces and common areas.

21 September 2019 – Catella Asset Management Iberia has launched a second fund, Catella European Student Housing Fund II (CESHF II), specialising in student residences. The fund, which already has 100 million euros in its war chest, expects to raise up to €250 million over the next two years. CESHF II will invest in university cities with the potential for growth in Germany, Austria, France, the Netherlands, Belgium, Luxembourg and Spain, along with possible investments in the United Kingdom, Denmark, Portugal and Poland. The fund is aiming for broad diversification and a total of around 20 assets.

The new fund’s first acquisition was a 208-flat student residence in the German city of Mannheim. The building can accommodate up to 313 students and was recently built in a newly-developed area of ​​the city, Franklin Areal.

16 September 2019 – A fund controlled by the firm Catella has acquired four new buildings with 171 subsidised (VPO) rental flats in Villaverde, Madrid, for 27 million euros. AQ Acentor, the real estate development arm of the German fund Aquila Capital, sold the assets, which include one-, two- and three-bedroom flats, each with allocated parking and storerooms.  The buildings also have common gardens, swimming pools and playgrounds.

The Swedish manager, Catella Asset Management, wants to continue expanding its footprint in Spain, where it has invested €250 million over the last three years.

To this end, the investment firm, which has focused on the housing, student hall and retail sectors until now, is planning to invest €200 million in the purchase of office buildings and parking lots in Spain and Portugal over the next 2 years.

In addition to the major cities of Madrid, Barcelona and Lisbon, the company is also analysing operations in secondary cities such as Valencia, Málaga, Bilbao, Zaragoza and Porto.

Since we arrived, we have invested €1.4 billion in Spain”, explained the CEO of AQ Acentor, Sven Schoel.

One of the fund’s first projects in Spain was in Villaverde (Madrid), together with the property developer the Inmoglacier Group, to build 1,300 homes, including 400 units for rental use. That project has almost been sold in its entirety, including the rental properties, which were sold to Catella and the Socimi Vivenio. After concluding that project, the alliance between Aquila Capital and Inmoglacier came to an end last summer.

Following that launch, the company has been adding new developments on a piecemeal basis in Cataluña, Málaga, Madrid and Valencia (…).

In total, the company currently has 5,400 homes in various stages of development. The company has 550 homes in an advanced phase, which are going to be handed over during the course of this year.

In addition to residential development, the company owned by Aquila is now preparing its debut in the logistics sector. Specifically, it is finalising the purchase of two plots of land for development in Madrid and Barcelona with a total surface area of 500,000 m2 for around €50 million.

“Logistics is one of the sectors with the most potential; we will begin by developing logistics land, although we do not rule out carrying out turnkey projects for tenants in the future”, added Mr Schoel.

The director also highlighted the company’s commitment to the environment and its support for sustainability (…).

The Spanish family office Mazabi has decided to sell an office building that it owns along the Prado-Recoletos thoroughfare in Madrid, next to the Congress of Representatives.

The property, which has a surface area of 1,400 m2, spread over the basement and six upper floors, is located on Calle Santa Catalina, 4. Mazabi acquired the property three years ago as a value-added investment, and during this period, it has renovated it and found a new tenant to now sell it for a profit.

Specifically, the property is soon going to be home to the headquarters of the US social platform Fever in Spain. The company, which has headquarters in New York, London and Madrid, has decided to relocate to these new offices in light of its major growth plans. Fever’s employees are expected to move in once the renovation and design work for the new offices has been completed, in a period of approximately nine months.

The operation, which has been brokered by the real estate consultancy Catella, has been closed for €6 million. The buyer is a Spanish family office (…).

Firmum Capital is stepping on the accelerator to increase its portfolio of parking lots in Spain. The Spanish parking lot manager is on the verge of closing a €60 million capital increase to finance new purchases in the domestic market.

Firmum was created in 2016 by Cristian Abelló, Bernardino Díaz-Andreu and Fernando Pire, who have generated a portfolio comprising 64 parking lots distributed over a dozen Spanish autonomous regions, according to El Economista.

In total, Firmum owns 27,000 parking spaces in the market, which following the financing round, will be increased with more assets in Spain and Portugal. The current investors in the manager include Banco Sabadell, through Sabadell Asset Management, and Altamar Capital Partners.

Last year, the fund invested €80 million in the purchase of 39 assets, which added 15,676 parking spaces to its portfolio. That investment plan comes at a time when these types of alternative assets are booming.

This segment is attracting interest from many funds and institutional investors, who are willing to pay high prices for parking lots in the centre of provincial capitals, tempted by their long-term returns. In Europe, there are around 305 million public parking spaces and 53,650 private multi-storey parking lots, according to a report compiled by Catella.