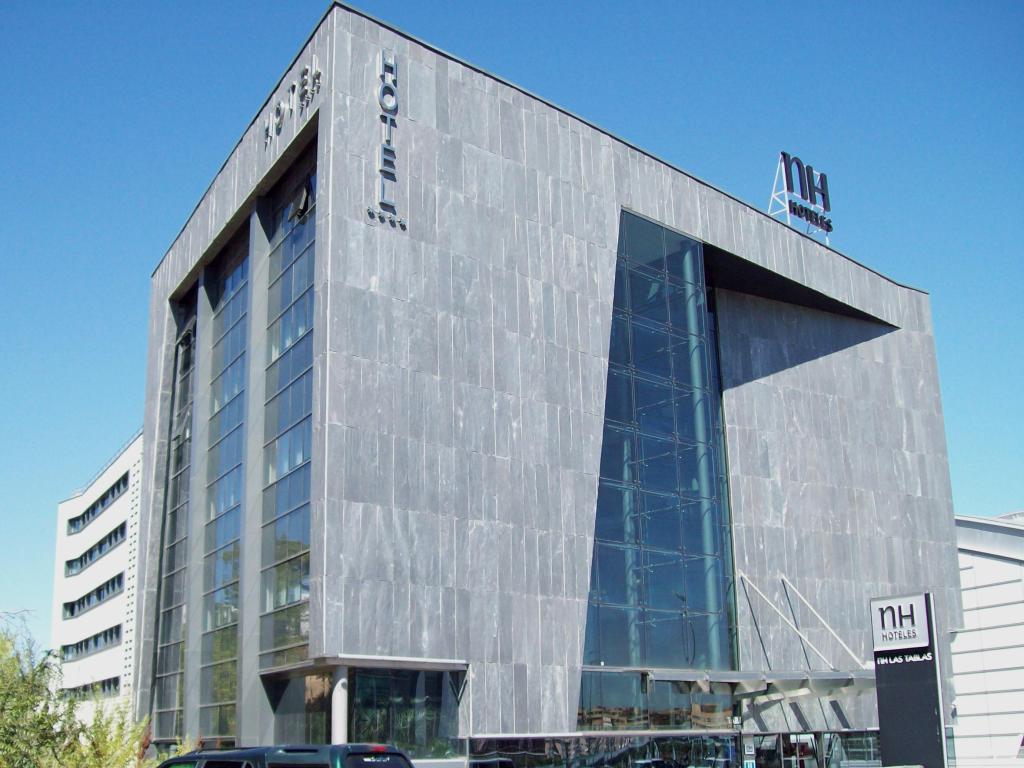 The 4-star hotel is located in Madrid at Avenida de Burgos 131. The hotel has 149 rooms and 174 parking spaces.

4 December 2019 – The socimi Atom Hoteles has finalised the acquisition of a hotel in Cádiz for 15 million euros. The four-star hotel is located in the city’s historic centre.

8 October 2019 – The socimi Atom Hoteles, which is controlled by Bankinter and Global Myner Advisors Capital Investment, will undergo an €80-million capital increase to finance its acquisition of the 439-room Isla Bonita de Tenerife and the 125-room Riviera Marina de Gran Canaria hotels. The firm agreed to pay 52.6 million euros for the first hotel and 15 million euros for the second, for a total of €67.6 million.

Atom Hoteles also announced that it had reached an agreement with the FTI Group’s Meeting Point Hotel Managements to operate the two 4-star units under its Labranda Hotels & Resorts brand. Either party may opt to extend the 12.5-year lease. Meeting Point will pay 6% of each unit’s revenues in rent, with a minimum guaranteed amount of just over 6% of the acquisition price.

The agreement also stipulates that Meeting Point will invest approximately €25.6 million in the Isla Bonita hotel and approximately six million euros in the Riviera Marina hotel to upgrade and reposition the assets.

According to data available to Christie & Co, total hotel investment in Spain in 2018 amounted to €4,860 million, across a total of 223 transactions (surpassing the 185 transactions registered in 2017). That represents an average price per room of €128,000 and an increase of 24.6% in the total investment volume versus 2017, positioning Spain in second place after the United Kingdom (where investment amounted to £6,500 million), but ahead of Germany for the first time (where €4,000 million was invested).

The report also emphasizes how the estimated investment figure was greatly increased by portfolio transactions and significant assets, which represented more than 60% of the investment volume across the whole country. Blackstone, which was the main player in 2017 with the purchase of the HI Partners portfolio (€630 million) was again a protagonist in 2018 with the purchase of 48 hotels from the Hispania REIT portfolio, for €1,900 million.

Likewise, transactions such as the purchase of the Atom Hoteles portfolio, the joining of the Chinese group Gaw Capital and the increase in the stake of Omega Capital in the Hospes hotel chain, the 9 urban hotels in the Silken portfolio acquired by CBRE Global Investment Partners and Pygmalion Capital Advisers LLP, the takeover of NH Hotel Group by Minor International, and the purchase of Hotel Villa Magna by the Mexican REIT RLH Properties for €210m (with a record price per room of €1.4 million) caused the total volume transacted in Spain in 2018 to once again beat all the established standards (…).

The configuration of the investment map of the Socimis on the Alternative Investment Market (MAB) has changed drastically following the recent incorporation of the company owned by Santander, BBVA, Acciona and Merlin Properties. With a portfolio comprising 10,700 homes, Testa has placed the residential segment in first position on the investment ranking of new listed companies, relegating the office sector to third place.

In this way, of the 14 new joiners to the MAB so far this year, 30.8% have housing as the main or significant target of their investments, compared with 12.8% of the 20 new companies that made their MAB debuts in 2017. With this boost, offices, which had led the ranking until now, have been relegated to third place with 15%.

The weight of retail premises is also striking since they have increased from 6% to 23%, according to data from Armabex. Beyond specialisation, registered advisors also highlight the leading role of international investors, which account for 43% of the new listed companies.

“The rate of new joiners is expected to continue and this year, we are going to comfortably exceed the total figures recorded last year (44 companies), to more than 70”, said the President of Armabex, Antonio Fernández. Currently, there are 59 Socimis trading on the MAB, which account for 60% of the one hundred or so companies that participate in the Alternative Investment Market.

In terms of the upcoming debuts, the Socimi from Bankinter specialising in the hotel sector, Atom Hoteles, is planning its launch. Other examples include Haya Real Estate, Vía Célere and Azora, whose plans to debut on the stock market have been delayed due to the instability in the international financial markets, the political uncertainty in Spain and the evolution of the businesses themselves. The most recent to debut, at the beginning of August, was Mistral Patrimonio, whose activity focuses on rental homes.

“These companies have evolved towards greater specialisation. They started leading tertiary assets to move towards housing and, now, they are opening up to other segments such as hotels, residences, healthcare complexes, gas stations, etc.”, says Fernando Vives, Technical Director at Alia Tasaciones.

To ensure transparency, the regulations require that these investment vehicles are listed on a regulated European market, be it the main stock market, the Euronext or the Alternative Investment Market, in a maximum period of two years following their constitution.

Nevertheless, the stock market listing is not the only method of transparency. The MAB has just introduced a new requirement that obliges companies to issue more reports. They will be obliged to undertake an annual valuation of their assets, beyond the initial assessment. (…). “The measure obliges Socimis to provide more information and to incur expenses, but it is very positive at the macroeconomic level and for investors”, says Antonio Fernández (…).

“The Socimis have brought confidence back to the real estate sector after the real estate bubble burst. They are here to stay, taking advantage of the upwards cycle and they will continue to activate the real estate market, above all for tertiary use until at least the end of the cycle (…)”, says Vives.

Meliá Hotels has announced an agreement with the Socimi Atom Hoteles, in which Bankinter holds a stake, for the sale of three hotels in Sevilla, Santa Cruz de Tenerife and Fuerteventura for €73.4 million.

The establishments will continue to be operated by Meliá by means of variable rental contracts (25% of the total revenues) for periods of 5 years, with a maximum of 4 extensions at the discretion of Meliá and up to a maximum of 25 years.

The operation values each room at €66,000 and represents an EBITDA (result before depreciation and amortisation) multiple of 13.9 times.

As part of the agreement, Atom undertakes to invest €20.2 million in the three hotels, whereby allowing their “repositioning”. Thus, the price per room after the investment will amount to €83,000.

The hotel chain has said that this sale forms part of its “strategy to adapt the attributes of the brands of all of the establishments operated by the company”.

Original story: Expansión (by D. B.)

Atitlán is continuing to shake up the real estate market with its operations, in this case focusing on the hotel sector. The investment firm owned by Roberto Centeno and Aritza Rodero has sold six hotels to a new Socimi in the sector that is being promoted by Bankinter. According to sources familiar with the operation, speaking to Valencia Plaza, the asset sale has included the Hotel Rey Don Jaime de Valencia, amongst others.

The transaction represents Atitlán’s departure from a market in which it has operated by stealth since 2013 when it began to acquire hotel assets in Spain. Its modus operandi involved buying up hotels in need of refurbishment in good locations. The company then invested in the renovations before putting the properties back on the market, in some cases affecting a change of operator to optimise the management.

The brand acquired the aforementioned portfolio, containing six hotels in total, located in the cities of Madrid, Sevilla, Palma de Mallorca, Santiago de Compostela and Valencia, in the case of the latter through the purchase of the Hotel Rey Don Jaime from Grupo Beatriz, whose management was entrusted to the operator Hotusa.

That acquisition was completed in 2015 when the hotel was in the midst of a redundancy program. According to reports at the time by the Valencian edition of El Mundo, the investment made by the new owner – Atitlán – was €5 million. The 14-storey building is one of the largest hotels in terms of capacity in Valencia.

When asked about the subject, sources at Atitlán confirmed to this newspaper that a portfolio of six hotels – comprising 900 rooms in total – was sold in February – including the Hotel Rey Don Jaime. The firm declined to confirm the location of the other properties or the total amount of the transaction.

The operation comes shortly after another high profile sale by the company owned by Roberto Centeno – the son-in-law of Juan Roig – and Aritza Rodero. Last month, the firm sold three plots that had been owned for years by a subsidiary of Nuevas Actividades Urbanas (NAU) for €33.6 million, after taking control of NAU just over a year ago for €8.7 million.

The buyer, in that case, was the US fund Harbert Management Corporation, which made its debut in Valencia through this operation hand in hand with the property developer Momentum Real Estate Investment Managers.

Sources familiar with Atitlán’s hotel operation add that the company that has acquired the assets is Atom Hoteles Socimi SA, a firm promoted by Bankinter, which owns 19 hotel establishments in total spread all over Spain.

The bank has also been silent about the project, although the Mercantile Registry reveals that the new company, which was constituted in January, is chaired by Eduardo Ozaita Vega, the Director General of Bankinter.

At the end of last year, market sources revealed Bankinter’s intention to launch a Socimi focused on the hotel sector this year for its private banking clients, in which it will maintain a stake of around 10%.

The entity led by María Dolores Dancausa plans to launch this investment vehicle on the Alternative Investment Market (MAB) with a share capital of around €200 million, for those clients whose wealth exceeds €1 million. The minimum investment to participate in the Socimi will be €200,000 per client, up to a maximum of 15% of total assets.

In this way, Bankinter is replicating the model of Olimpo Real Estate (Ores), a Socimi that it launched to invest in small and medium-sized retail assets in which the entity retains a 10% stake and which was designed to respond to clients who were demanding higher returns in the context of low interest rates.