Two months from the opening of the Reserve Roastery in Piazza Cordusio, a temple of American coffee raising on a 2,300 Sq m surface with a roasting centre catering to whole southern Europe, Starbucks is about to open its next store in Milan. This time it will be a traditional Starbucks shop as there are many around the world, where it will be possible to enjoy a Frappuccino, a Cold brew or a White chocolate mocha, besides an espresso, or grab a coffee to go, following the tradition of the Seattle brand founded by Howard Schultz. 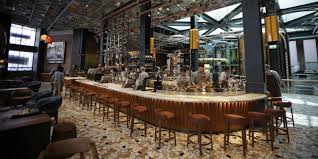 The next store will open in Corso Garibaldi, not far from Porta Nuova and Piazza Gae Aulenti. It will have a surface of 200 Sq m. Another shop will be inaugurated on Saturday in Piazza San Babila, at the corner with Via Durini; and on 29th November it will be the turn of the shop at the terminal 1 of Malpensa airport. What have been the results so far? With the store in Piazza Cordusio and the other three ones, the group has created 400 new jobs in Milan.

But Starbucks is not stopping. The company will open another store in the Central Station. “Yesterday we tested the 28 guys who will work in the shops in Corso Garibaldi. We invited about fifty people and offered them a coffee. The guys reacted very well to the stress test”, said Roberto Masi, new Ceo for Starbucks Coffee Company, with a solid background in retail. He worked in the team that brought the French Carrefour supermarkets in Italy in the Nineties, and he worked for over a decade for McDonald in the relaunch of the fast food chain with the introduction of McCafés. Now he’s facing another challenge related to coffee. He was appointed by the Percassi group, led by Antonio and Matteo Percassi. The Bergamo company made possible the arrival of Starbucks in Italy, as it did with other international brands such as Zara, Nike and Victoria’s Secret. Moreover, Percassi also developed the Benetton shops. Unlike the Roastery, the coffee in the other store will be less expensive: 1.30 euro for the espresso, 1.80 the cappuccino, at the bar as well as sitting at the table.

Percassi accepted the challenge, taking the enterprise risk as a master franchisee. The company will identify the best shops where to serve coffee under the Starbucks brand. What are the plans concerning Milan? The details are confidential, but Masi says that “a city like Milan has to open 20-25 stores in order to be efficient (meaning profitable). But it will depend on how successful our product will be”. The group may create in Milan about 750 new jobs if the plan is entirely implemented.

According to the plan of Schultz and Percassi, the brand is meant to open stores in Rome (near the Vatican), Florence, Bologna, Verona, Venice and Turin. The manager adds: “We’ll open 12-15 new stores every year. It’s easy to be appreciated by foreigners. Now we have to deal with the tastes of Italians”. As it did already with the Roastery in Piazza Cordusio, Starbucks will also insert some typical elements, especially for what concerns the food offer. Masi comments: “we’re coming with humility and respect to a country with a great coffee and food tradition”. He shares the same values as Schultz. At the same time, they believe in the quality of their offer. Percassi researched the excellence also regarding food, finding in Clusone (close to the Percassi’s hometown) the artisanal Atelier of the Maringoni family which, with the support of Starbucks, opened a production centre. Masi explains: “we’re going to replicate the same model as the agreement with Princi concerning the Roastery”.

Therefore, the dream that Schultz has been chasing for over 30 years is gradually taking shape. The quality of the coffee will be excellent throughout all the stores: only Arabica imported from 30 countries and eco-sustainable plantations in Costa Rica. “We’re trained for four months the staff according to the Starbucks values: respect, care for people, also for what concerns salaries. Their wage will reflect the same stock plan offered to the Starbucks direct employees”, continues Masi. In the meanwhile, he, together with Percassi, carries on with the project regarding Don Gino Rigoldi Foundation to help young people from difficult areas: three guys of the foundation are employed in the stores. The company has also entered an agreement with Banco Alimentare to provide fresh food about to expire to poor and needy people.

Following a Schultz’s idea, who was captured by the Milanese cafés while travelling in Italy, the stores will have a design reminding a traditional bar, from the floors to the bar: marble and brass. The design is cured by Liz Muller, the brand’s head of design and the author of the Starbucks Roastery Reserve in Milan, the third in the world besides Seattle and Shanghai.

Blackstone is selling its Italian outlets. The Chinese group Sasseur is among the competitors

27 November, Il Sole 24 Ore The portfolio of the US fund Blackstone, one of the biggest global real estate...