“Why buy a second house? With the same money, we can buy a couple of shops in the suburbs, and with the rent money we can go on holiday wherever we want”. It’s a question frequently asked during conferences: it’s uncommon but interesting. For this reason, we’ll try to answer it. We’ll be using the data from the report by Tecnocasa in collaboration with Confesercenti concerning prices for selling and leasing a commercial space in Milan. We’ve excluded the most sought-after areas for two reasons: prices are out of reach for the average investor intending to diversify the portfolio, the second is that returns are lower in the prime areas. We’ve also excluded the suburban areas where prices are so low that reselling the property might be difficult, even though it would grant double-digit gross returns. 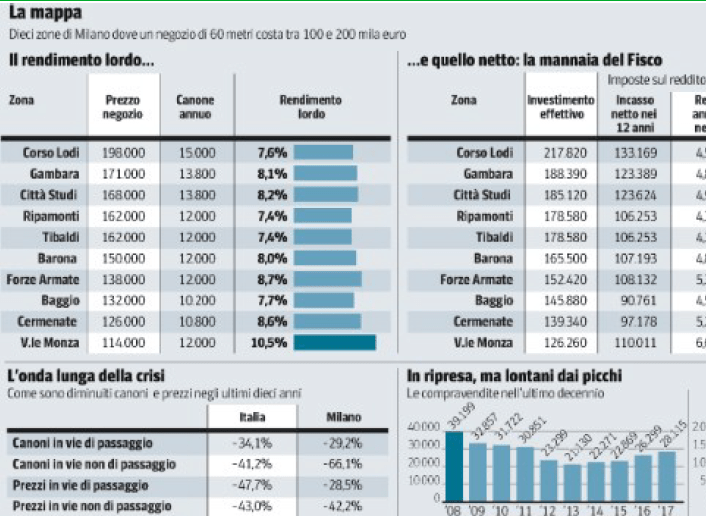 We’ve then selected ten neighbourhoods of Milan where it’s possible to buy a 60 Sq m shop for 100-200 thousand euro, with potential returns (yearly rent divided by the property price) comprised between 7.6% and 10.5%. We assume to lease the property for 12 years, the standard length of a lease contract. Furthermore, we’ve added to the price an estimation of the fiscal and professional charges for the transfer of property, considering a 70% of the price for Imu and Tasi. On this matter, two different types of taxpayers have been profiled: the first has an income tax equal to 24% (Irpef, additional charges and yearly registration), for the second taxpayer is 40%. In Milan, 44.26% is the maximum income tax.

Finally, we assume that at the end of the 12 years the value of the property has not changed. Analysing the cash flow, the subject with an income tax at 24% will have net yearly returns between 4.5% and 6.6%, which are interesting numbers. For the person with the 40% income tax, the returns shrink, comprised between 3.2% and 4.9%.

Such results would have been even higher if a 21% flat coupon had not been applied to non-residential properties. The new government committed in its “contract” to introduce a flat tax, which would greatly favour investors, even though no action has been taken so far. Nevertheless, the issue about who is supposed to pay for the expenses would still remain.

The analysis by Tecnocasa highlights some peculiarities of the Milan retail property market. The most significant one is the typology of the demand. In the city centre, catering (bars included) represent the most significant portion of the demand with 34% of the total against 28% of the national average. Offices are second, 18.2% in comparison with the 4% of the rest of the country. On the other hand, there is little demand for clothing shops in Milan, while they’re more than 10% in Italy.

Trieste, the Carciotti palace is for auction: the starting price is 22.7 million