Unipol announced the completion of the requalification and re-organisation process of 13 flats at the 19th, 20th and 21st floors of Torre Velasca in Milan. The apartments have been completely remodelled preserving at the same time the original finishing, doors, windows and structures. The remodelling, as well as the concept of the 13 apartments, is signed by the architectures of Lissoni studio, with the collaboration of Living Divani, Porro, Boffi, Kartell and Flos, which selected the pieces of furniture and the furnishing, the lights and kitchen components. 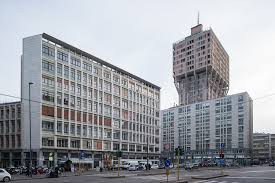 The apartments come furnished with cutlery, plates, small appliances, TV and washing machine. The atmosphere reminds of the Milan in the Fifties. Designed by Bbpr under commission from Rice and Arturo Danusso, the tower was built in 1957, becoming one of the symbols of Milan. All the elements have been carefully studied, from the styling by Valeria Girardi to the choice of accessories and the selection of the architecture books and magazines, given the iconic status of Torre Velasca.

The apartments are part of the Domux Home luxury apartments collection. As Unipol explained, the objective is to turn business and leisure travel into an occasion to discover and experience the city of fashion and design from a privileged point of view. This will be possible thanks to the incomparable view of the city from the tower and by the renewed interest of Milan for vertical living. The Unipol project has a wide range, for the Domux Home, the brand of the insurance company dedicated to temporary accommodation, offers apartments combining luxury and design in the group’s prime buildings in the city centre.

The Domux Home residences were launched in Florence in 2017 (four apartments in Piazza Repubblica and seven apartments in Via Ricasoli). The flats in Via Ricasoli are centrally located, being only 600 metres from the Gallery of the Academy and few steps away from Duomo. The four penthouse apartments in Palazzo Levi in Piazza della Repubblica offer a view of Santa Maria del Fiore. Palazzo Levi is a neo-renaissance building built in the late 19th century. It was designed by the architect Giuseppe Boccini under the commission of the banker Levi. This impressive building is known for accommodating the famous Paszkowski and Gilli cafès. In Milan, the 26-storey Torre Velasca is part of Urban Up, the Unipol’s real estate requalification plan to promote the Italian architectural heritage represented by the assets included in the group’s portfolio.

The apartments offer stunning views of the city and excellent design. The prices of the short-term rentals are definitely reasonable, given the story of the tower and its atmosphere. The next step of Unipol Domux Home will be Torre Galfa, which is also included in the Urban Up requalification project with the objective of turning the building in an innovative multifunctional space, accommodating a luxury business hotel, design apartments and a public lounge terrace. Torre Galfa was built between 1956 and 1959 by the architect Melchiorre Bega to accommodate the offices of the oil company Sarom. It was sold in 1980 to Banca Popolare di Milano, then abandoned in 2001 and sold again five years later to Fondiaria-Sai (also Torre Velasca is another Fondiaria-Sai operation). The requalification works will be completed in 2019. Torre Galfa will accommodate Innside Melià (from -2 to the 12th floor), the Halldis temporary apartments (from the 13th to the 15th floor), luxury apartments Domux Home (from the 26th to the 28th) and the Rooftop restaurant (29th and 30th floors) for which four big brands of the fine dining world are competing.

Moreover, Torre Velasca is also to host Tower Tales, a series of cultural appointments combining design, art and sound. The project is promoted and organised by Urban Up-Unipol Projects Cities and will take place on the tower’s ground floor which will be open to the public. The first protagonist of Art Tales will be the post-minimalist artist Keith Sonnier, a pioneer in the use of light in sculpture. His videos from the Sixties will be exhibited till the 16th February 2019 with the collaboration of Converso Offsite. The works, displayed for the first time in Italy, offer a different version of the artist, who is internationally known for his neon sculptures.

SoundTales was inaugurated on 7th November with a concert of the world-famous guitarist Bill Frisell. It was the first of four jazz music events organised in collaboration with Blue Note. The next appointments will see the participation of Sarah Jane Morris on 22nd January, Andrea Motis on 27th February, and Roger Rota in March 2019. The concerts are reserved for the residents of Domux Home and will be accessible only through invitation.

DesignTales started with the launch of the second edition of the contest “Velasca design project — ideas under the tower” in occasion of the 60th anniversary of the Velasca tower. The participation of schools was unanimous: Domus Academy, Ied, Marangoni, Polimi, Naba and Politecnico will compete with works based on the theme of light by designing a lamp for the Velasca public spaces. The jury will be composed of Gilda Bojardi, Antonio Citterio and Fulvio Irace. The deadline to submit the works is the 5th February 2019, and the awards ceremony will be in April 2019.

Investments for nursing homes are growing

05 December, Monitor Immobiliare In the last ten years, the investments in healthcare properties have gone from an average of...