It comes a moment in the life when you have to decide whether to buy a house and where. A house where to move out from parents, a house for a new couple or a family, but also for people coming from an ended relationship. 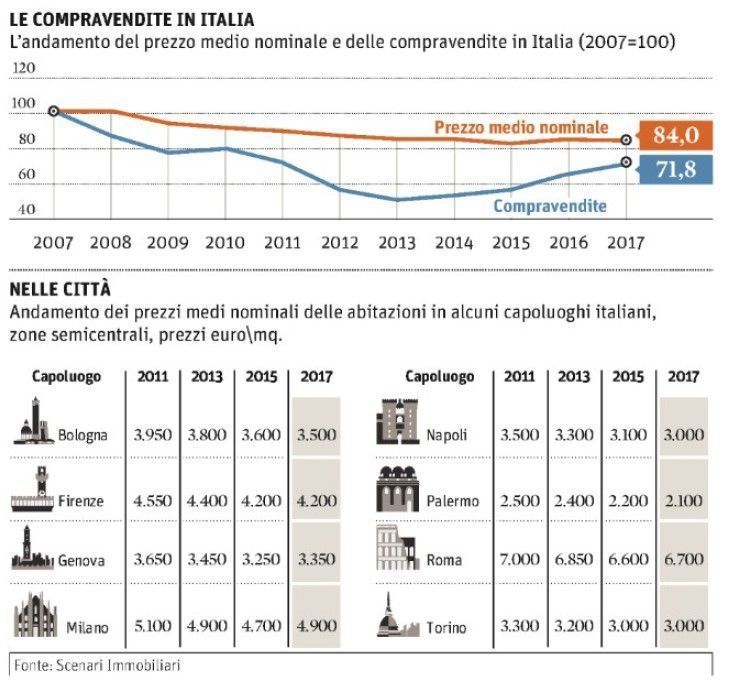 The answer is not easy, having to take into account personal necessities and budget, as well as the broader economic context. If it’s true that prices in Italy have fallen on average by 30% since the beginning of the real estate crisis, it’s also true that such important decisions cannot be made regardless the trust in the market and in the economy, the future interest rates (on which the mortgage instalments will depend), and the political stability.

That said, Italians are willing to buy a house, and not only in the big cities. The trend is confirmed by the quarterly data from the Revenue Office. All the four quarters of 2017 have registered an increase of transactions for residential properties, mostly as the main dwelling. There have been some interruptions throughout the year, as reported in June and September 2017, where the transactions increased only by 1.4%.

In the last three months of 2017, the variation has been equal to 6.3% (+8.6% for the first three months of 2017). At the end of the year, the Revenue has reported a growth for the eleventh quarter in a row in terms of transaction volumes (152,608 properties for a total surface of 16 million Sq m), going from +0.3% in the Centre to +12.2% in the South. The transactions in the non-province capital cities have surpassed those in the provincial capitals, with +6.7% against +5.5%. This is the signal that the trend that involved the main cities has spread also to the smaller cities.

Why aren’t prices recovering? Mario Breglia, president of Scenari Immobiliari, says: “There are two main reasons why prices aren’t growing. The lack of inflation doesn’t cause prices to rise for any product or service, houses included. The other reason is the market as such. In fact, most of the demand is for a property upgrade (a bigger house, a better location, more comfort), but the average quality of the product on the market is very low. People prefer to ask for a discount on the price in order to be able to afford renovation works, as long as the location is good. For a good quality product (for instance, new properties well located), prices aren’t dropping. On the contrary, they’re rising”.

Not only. In Italy, there is still a stock of NPLs backed by real estate, in most cases properties that cannot be placed on the market, which needs to be disposed of. Furthermore, the composition of the demand has changed throughout the years. In fact, purchases financed by mortgages has become the prevailing part, while the investment component generally placed on the high-end of the market has reduced. As a result, prices haven’t grown much, and this trend has become difficult to invert.

Shopping centres, funds invest in the Made in Italy format

In the program for 2017, there are nine openings thanks to the hub solution which gathers several activities, from...