The 2018 performance oscillates between satisfying and disappointing, reducing the expectations for a radical change in 2019. Starting from residential, the reasons for satisfaction are the same of the past few years: more transactions, houses are selling faster and at lower discounts on the requested price. Such results are due to the moderate growth of the economy, low mortgage rates, and prices that are still below the peak level, even though with some exceptions (but this trend is meant to grow).

The disappointment is due to the numbers of these trends. If it’s true that transactions have increased, there is still a good 25% to reach the record of 800-850 thousand sold properties recorded in 2007-2008. The price situation is even worse: not only they’re far below the pre-crisis values, but the few increases have concerned so far only some selected locations such as Milan, the central and semi-central areas of the main cities (and not even all of them) and some tourist destinations. Elsewhere, prices have further decreased. According to the figures published by Nomisma, 2018 will close with an additional 5.6% increase in transactions, totalling 572,752 deals. The average prices will decrease further by 0.9% from 2017. Hence, nothing similar to the considerable and widespread price increases that characterised the previous economic cycles and that concerned the main European cities. 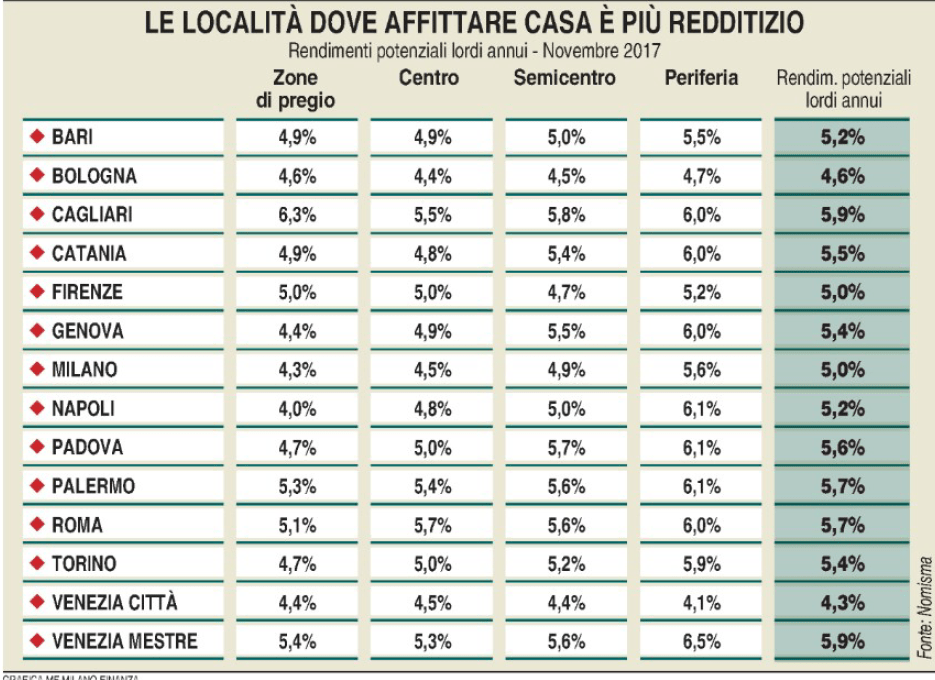 The recovery goes on but at a slower pace than expected or desired. In addition, there are worries concerning the future. According to Nomisma, the trend will still be positive at least up to 2020, and prices will eventually rise in the first half of 2019 (for the first time since the first quarter of 2004). The outlook is for 595,688 transactions in 2019 (+4%) and 611,025 (+2.6%) the next year. Prices will record a more moderate increase by 0.1% on average in 2019 and by 0.5% in the following year. However, there will be some differences: in the first 13 Italian cities, prices will significantly increase in the central areas (+1.8% for prime areas, +2% for the remainder), while the increase will be more limited elsewhere (no variation for semi-central areas, +0.4% for suburban areas). Concerning existing houses, prices are estimated to moderately grow in the central areas (+0.2% in the prime areas, +0.4% in the central ones), while they’ll continue decreasing in the semi-centre (-1.5%) and in the suburbs (-0.4%). The differences between the various cities are less dramatic for new construction than for existing houses. Dated houses in the suburbs will span from a 10.2% decrease to a 12.8% increase. This is true as long as the macroeconomic situation will not get worse, as the financial markets are fearing at the moment. In fact, central banks, the IMF and the Governments have already set their expectation for the upcoming years lower. The increased number of investors might contribute to the recovery of the residential market in Italy, having gone from 6.1% in 2017 to 15.4%, targeting 400 thousand potential buyers. The reasons are the convenient prices, the lack of valid investment alternatives and the excellent results of rentals, especially short-term and tourist rentals in the big cities. The advantages for property owners are obvious, considering the higher profits and the lower insolvency risks.

The situation is varied also for what concerns the non-residential market. For the first time since the start of the recovery, 2018 reported a decrease in the investments. Such a reduction, however, was predictable, considering the record for over 11 billion transactions reported in 2017. Hence, such a result has not to be seen as a U-turn of the positive trend. As reported by Cbre, the office segment recorded the sharpest decrease (-40%). The segment was supported in the past by a strong marketplace such as Milan, where the market has slowed down due to the scarcity of product and the high prices. On the contrary, the retail and hospitality segments are rather dynamic, having respectively grown by 22% and 9% in the first nine months of 2018. The situation for industrial and logistic assets is more unsure.

Frosinone: disagreement about a new shopping centre in place of the former Permaflex factory

08 January, Il Messaggero The reconversion of the old Permaflex factory is currently being debated, as there is concern about...