The Italian property market is a steam locomotive, while the rest of Europe is a high-speed train. 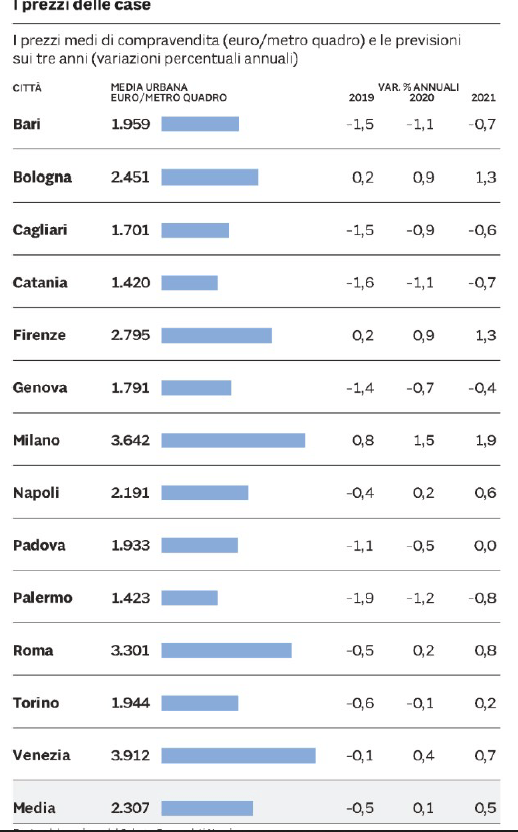 In the last seven years, many European countries had left recession behind and even reported a double-digit increase in house prices. It’s the case of Lisbon and Amsterdam.

In Italy, property transactions have recovered, but prices are unchanged. The market is not homogeneous, as some cities have recovered while provinces are still struggling.

Mario Breglia, president of Scenari Immobiliari, says: “Europe is about to decelerate its growth”. The party is almost over, and Italy didn’t even participate. He continues: “Transactions in Italy are 30% lower than the maximum levels, and prices continue falling, although slightly”. The average prices have dropped by 30-35% from the beginning of 2018. This negative trend has lasted for years, while in other countries in Europe such as Spain and Ireland, after having collapsed, had a remarkable recovery.

However, the future looks positive. Italian real estate, in fact, is benefitting from the dynamic growth of the rental market which is driven by short-term rentals (one million of properties is on the market with this formula) and of some emerging segments such as student housing, where big international groups as Hines are active, and accommodations for young professionals (on a minor extent, assisted living too). These new niches have been giving a new impulse to the market.

These factors encourage a cautious optimism for 2019. However, some elements are burdening the residential market. One of these is the fear for a significant stagnation of the economy, while the spread is less worrying than before.

In 2019 price will continue growing, although slowly and moderately, as reported by Nomisma in November 2018 surveying the first 13 Italian cities.

According to Nomisma, the biggest markets have already reached a breakthrough. Milan was the first to register the countertrend, as last year the city reported a rise in the average prices, both for the residential and the commercial sector. All the parameters suggest a further and consistent growth of the market which will also reflect on the construction sector.

Concerning house prices, in 2019 Bologna and Florence will return to positive results (+0.2%), followed in 2020 by Venice, Rome and Naples, and finally Turin in 2021. The south of the country and the islands will continue registering negative performances for the whole three-year period along with Genoa and Padua in the north. Nomisma forecasts that in 2019 prices will register an average reduction of 0.5%, for then consolidating in 2020 (+0.1%), and finally registering a sharper growth in 2021 (+0.5%).

According to Nomisma, prices will rise for new construction in the cities, with a more marked increase in the city centre (+1.85% for prime locations, +0.99% in the centre), while the growth will be more contained in the other areas (+0% in the semi-centre, +0.38% in the suburbs). As Istat has reported several times, the growth for dated properties is slower. They’re expected to grow in the central areas (+0.18% for prime locations, +0.45% in the centre), while they’ll continue to decrease in semi-central (-1.47%) and suburban areas (-0.44%).

Seven evolutionary trends of the retail market in 2018

20 January, Manager Italia During the RICS conference taking place in these days, experts and players of the sector discussed...