2017 has closed as expected: nothing has substantially changed for the property market and it has followed the trend of the previous quarters. 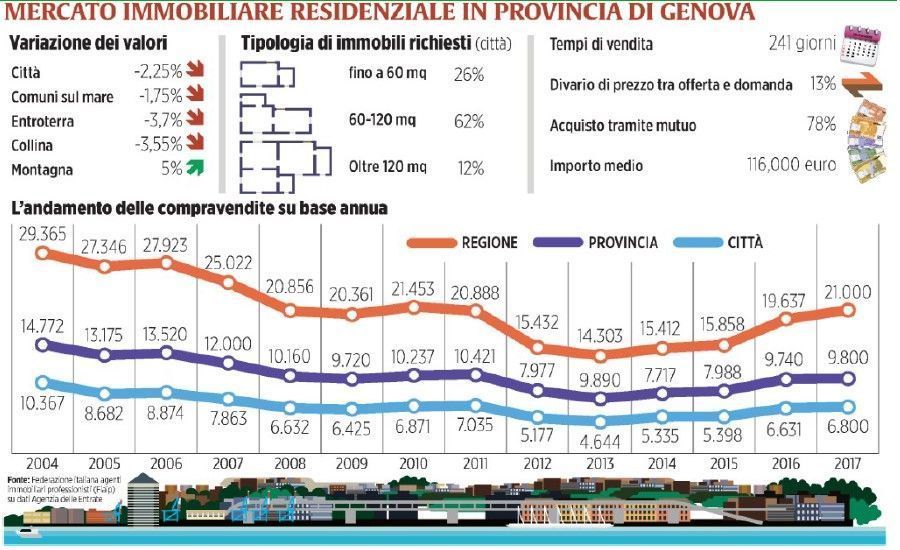 This is not a success: while sales have resisted, even reporting a slight increase compared to 2016, two worrying elements have emerged. These are the price reduction and the many vacant properties in the suburban areas, nowadays sold at minimum prices, even though they’re not desired by buyers.

“The market has performed quite well also in the last quarter of 2017, but prices have continued to drop”, says Fabrizio Segalerba from Genoa, the national secretary from Fiaip. For this reason, the operators of the sector have started worrying. In fact, if we compare Genoa with the other big Italian cities, here values have stabilized, if not started to grow. While in the province of Genoa, this happens only for the towns on the coast, while in the city the situation is getting worse, especially in the suburbs. “Fegino, Teglia, Via Fillak, they’re a story on their own – says Segalerba – and the poor quality of properties has significantly reduced the market in those areas”. Today, it’s possible to buy a 70 Sq m house in Via Fillak for 35-40 thousand euro, basically for less than the construction costs. This calls for a general replanning of the suburban areas that are suffering from depopulation and recession since they’re not able to recover. The Revenue published yesterday the figures regarding the last quarter of 2017 confirming basically what was stated by Fiaip: compared with the end of 2016, the numbers are positive and represent an improvement in terms of transactions in comparison with the third quarter of 2017.

“The market is hanging in but it’s poor and it doesn’t give the impulse we need- says Filippo Dellepiane, Ance vice president, the association of construction companies – The property market in Genoa remains a poor market with little added value. At a national level, we hope to find soon a partner to implement renovation and requalification projects. However, compared to the golden years, there’s a 30% still on the market that can be recovered”.

The Engineers Committee, together with the Architects Committee, has launched a challenge with the support of the Mayor Bucci: planning the city for the next 30 years. “Not only I’ll support this plan – said the Mayor – but I’m asking for your help with ideas and projects. We need brilliant ideas to create the future Genoa, professionals will be crucial for us”.  The ideas of engineers and architects will be evaluated to remodel Genoa, a city that, besides public works, also has an urgent need to reshape its residential areas. The challenge has been launched and got the support also from the condominium administrators.

03 August, Prelios The Capital Market team of Prelios Agency managed the sale of a building located in Milan at...