This could be the future or just an isolated case in Italy. The fact is that real estate Milan is registering an amazing result: supply and demand continue to grow, the times for negotiating and closing deals are reducing, the new constructions are selling well. But more importantly, after ten years of recession, house prices are rising too, a unique example in Italy. “This is true also for suburbs, that are now included in the positive trend of sales for the first time”, adds Luca Dondi, Nomisma general director. “We must also consider another important factor, the return of investors, namely who buys to rent, the sign that the market might enter in a new phase”. There are all the elements to talk about a recovery of the sector, but there are still shadows in the future of real estate: is a price rise possible in the absence (or almost) of inflation? What will be the destiny of the properties connected to NPLs? What about the suburbs with an excess of supply and incomes still uncertain? These elements were penalising the market in Milan still a short time ago, and elsewhere they still are, even though sales have slightly recovered. In Milan, prices have spiked. For this reason, the small variation of 0.1% reported by the Real Estate Observatory of Nomisma is the cause of such enthusiasm, also because it’s followed by the +0.3% of last semester. The national average is respectively -0.1% and -0.5%. 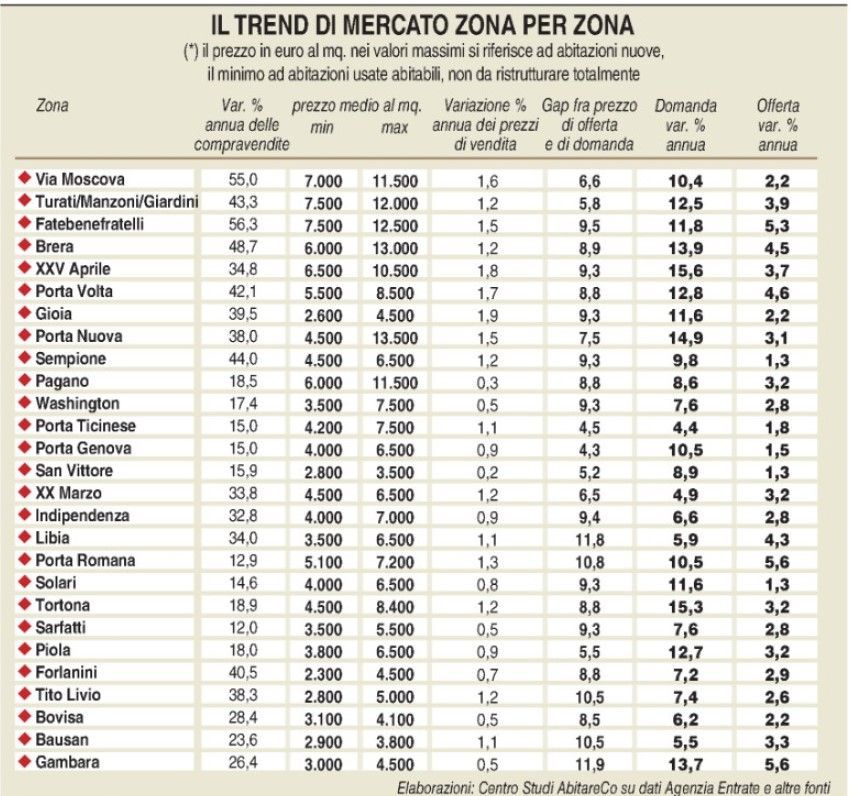 The factors that made the recovery possible are very well known: the economic recovery, strengthen by the success of Expo 2015 and by some requalification projects involving also the related infrastructures (from Darsena to Metro 5), the creation of a new area of key-importance such as Porta Nuova and CityLife, capable of changing completely the urban structure of the city. Then, we’ve seen the recent opening of the maxi shopping centre in CityLife, Allianz moving to the Isozaki tower, followed shortly by Generali moving to the Hadid tower, while the third tower, still to be constructed, might accommodate PwC Italia or Intesa Sanpaolo. But there is a great number of projects going on in the city and they involve pretty much every area. How they impact the residential sector is soon explained: more projects mean more wealth for the city, more people coming to visit or move there to work, therefore more demand on accommodation, pushing in this way to build more. For instance, the arrival in Porta Nuova of many big companies brought thousands of people, with a good effect on the area and in the nearby ones, from Corso Como to Isola, from Garibaldi to Brera. The same logic is valid for CityLife.

Besides business and jobs, the other main driver of the recovery of the residential market is the subway system. The biggest impact perhaps will be given by the M4, which will be completed by 2021, but its positive effects are already present, linking the city to the Linate airport, from Forlanini to the south-western suburbs, from Solari to Piazza Bolivar and Giambellino till San Cristoforo and the Ticinese area nearby. The M5 line is also doing well, relaunching the Zara-Bicocca area as well as the stations of Passante. As already mentioned, this economic dynamism attracts students and workers (the latest news is about Goldman Sachs hiring about one hundred people here) looking for a house to buy or, more likely, to rent. “When looking for a place to rent, the proximity to the metro station is more valued than the presence of a garage or a parking space, as the subway connects you to the city centre in no time without worrying about traffic” adds Dondi. It’s by chance that some companies are already investing in offices in Peschiera Borromeo, looking at the future extension of the M4.

The other element that proofs the solidity of this recovery is the success of new constructions on all the areas. “If the project and price are the right ones, almost half of the apartments will sell when still only on paper”, explains Giuseppe Crupi, AbitareCo Ceo, a consulting and brokerage company active in several construction sites in Milan. “At least 15% of the buyers buy for rental”. Renting in the city, as already said, is very profitable, also when dealing with demanding buyers, which are not looking for any house, but for a good place, ideally already furnished.

The future looks very positive for Milan. “Unless some shock will interrupt this trend of growth, we expect for 2019-2020 the prices to continue rising at the pace of 2% every year”, concludes Dondi. “The economy, after all, is so strong that prevented the city to collapse during the darkest periods, especially in the semi-central areas”. The growth will focus on the areas near the subway stations, as well as those concerned by new projects, such as the reconversion of the old train stations into new commercial, university and residential hubs. Many are the names: from Arexpo to Cascina Merlata with Technopole to Reinventing Cities, an initiative to regenerate industrial sites, from Santa Giulia, which was brought to new life by LendLease, as well as the conclusion of the requalification of Portello linked to Parco Vittoria with its over 400 apartments. In the meanwhile, CityLife and Porta Nuova are growing: the former might restart the construction works that have been paused, the latter has already started the skyscraper Gioia 22 which will become the new Unipol headquarters.