Time to go on holiday. Schools are closed, and the Italians are getting ready to spend another summer on the beach, away from the office in the cities. For those who haven’t booked anywhere yet, the best last-minute solution is renting an apartment. 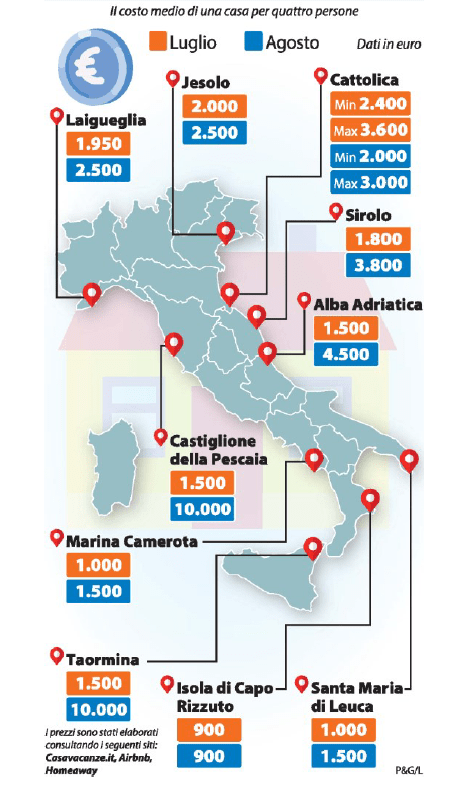 We’ve checked the most popular websites (Casavanze.it, Airbnb, HomeAway) and chose different beach destinations looking for solutions suitable to a family of four. The period considered is the week from 16th to 23rd of July and the Ferragosto week (13th-20th August). Generally speaking, it’s cheaper going on holiday in July, except in Cattolica, where it’s less expensive in August. These are the prices that we’ve found for each destination.

In Jesolo, a few minutes’ drive from Venice and four hours from Milan, prices start from 75 euro a day, reaching a maximum of 120 euro for July. Prices rise in mid-August when the cheapest apartment cost 98 euro a day. Prices go down if we rent for the whole month. It’s possible, in fact, to spend the whole month of July at the beach with 2,000 euro, 2,250 euro in August.

In the west, there is Laigueglia, Liguria, not far away from France and 200 km both from Turin and Milan. There is little difference here between prices in July and August: they both cots 700 euro a week, 1,260 euro for the most expensive properties. Prices go below one hundred euro a night if we decide to spend the whole month: 1,950 euro for July and 2,190 euro for August for the most budget solutions.

Going down on the Tyrrhenian coast, in Castiglione della Pescia (Grosseto), 500 euro in July and 600 euro in August are enough. Apart for budget accommodations, prices reach 350 euro a night for August. It’s possible to make some bargain if renting for the whole month, spending around 1,500 euro in July.

On the Adriatic coast, in the always famous beaches of Romagna, Cattolica offers apartments from 85 to 132 euro a night in the week in July. The prices go up in August, starting from 110 euro and reaching 142 euro. While if renting for the whole month of July prices don’t change, in August it’s possible to rent an apartment for 2-3 thousand euro.

One hundred km south, in the Marche, there is Sirolo, very easily reachable both from the north and the south. Here, there is a considerable difference between July and August. If it’s possible to rent an accommodation in July with 500 euro, the prices can be over 1,500 euro in August.

Always on the Adriatic Sea, a further 100 km down, there is Alba Adriatica (Abruzzo). Here, the week in July costs little less than 300 euro, while the price doubles in August with 600 euro. Concerning the whole month, prices go from 1,500 euro to 4.500 euro both for July and August.

Moving to the south, in Marina di Camerota (Salerno), Cilento, the price range varies a lot. Here, a family may spend even only 35 euro a night, but such amount doubles in August, reaching up to 150 euro. Those renting for the whole months can get more convenient prices, as the whole of July can cost little less than one thousand euro.

Capo Rizzuto, on the Ionian coast of Calabria, has similar prices, with 115 euro a night in the considered week in July and 123 euro a night in August. The prices per day are the same whether we book for the whole of July or August, as they both cost 900 euro.

On the opposite coast, there is Santa Maria di Leuca, the southernmost part of Salento, five hours drive and Naples and six from Rome.  Here, the most expensive apartments can exceed 2,200 euro for the week in August and 2,000 euro for the week in July. Same situation if we decide to rent for the whole month: prices go from a minimum of 1,000 euro in July to a maximum of 8,500 euro of some accommodation in August.

Finally, Taormina, less than an hour from the Catania airport, registers the highest prices of southern Italy. Here, there is not much difference between July and August, also because there are not many available accommodations left. For both months, prices go from 350 euro to 2,100 (July) and 2,400 (August). For who want to spend the whole month here (and can afford it), the price doesn’t go below 1,500, hiking up to 10 thousand euro even in July.

Bank of Italy: property foreclosure times have reduced by 40%