Real estate in Florence has resumed growing. The new tramway system is revitalising some neighbourhoods which have been suffering in the last few years from the endless construction works and the traffic. The data from Fimaa Confcommercio Florence are clear: the value of the properties located along the tracks has raised by 3.5% from December 2017. There are three percentage points of difference with the old town, which registered a 0.5% growth, and with the Oltrarno area, which has always been very appealing, reporting a 1.4% result.  Fimaa Confcommercio Florence President Arrigo Brandini explains: “We must consider, however, that the property market in such areas had significantly decreased during the construction works. Anyway, the property market in the areas served by the tramway has definitely reported a growth in the sales as well as in the rentals. We’re assisting at a new phenomenon: people are buying properties just outside the city centre to rent to tourists”. According to the data gathered by Fimaa, for instance, a 100 Sq m apartment in good conditions in the Statuto area can sell for 360-380 thousand euro while previously the price was around 340-360 thousand euro. In Carraggi, a property of the same dimensions is set around 330-340 thousand euro while in December 2017 it was 310-320 thousand euro. Therefore, the tramway is not only changing the city skyline, but it’s also moving the investments in tourism. 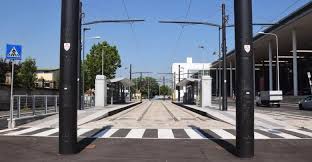 “Excellent position”, “Ten minutes from the city centre”. These are few of the reviews of the hotels located along the tramway in Florence. Roberto Incontri, owner of Villa Incontri in the Carreggi area, explains: “We’re five minutes from the tram stop. Our guests can reach the city centre in 13 minutes. Before, due to the construction sites and the slow busies, it used to take 45 minutes. Many praised in their reviews the excellent position of the hotel and the accessibility to the city centre. Many tourists prefer to book a room outside the city centre to escape the crowds. I believe that the new line connecting the airport will make the real difference”.