New properties, or at least renovated, are driving the demand for prime residential houses in the main cities. The trend breaks with the past when the luxury market was based mostly on significant renovation projects in the city centre. Things seem to have changed, as the figures from Engel & Völkers and Nomisma are rendering a different situation. According to the experts, “comfort and accessibility have an increasingly crucial role in the luxury property market”. Hence, the quality of the product is the main driver, while the interest in properties to renovate has decreased. “Transactions for prime properties have increased in all the main Italian cities, especially in Rome and Milan”, comment the analysts from Engel & Völkers and Nomisma, despite the worrying signals coming from the national economy at the beginning of the year. “Prices have reached peaks of 15 thousand euro/Sq m in Milan in Quadrilatero and 12 thousand euro/Sq m in the Rome old town. The luxury market is particularly active in Milan, where times to sell and rent a house have dramatically reduced. Rome, on the other hand, has started growing in the second quarter of the year”. Engel & Völkers reported a concentration of activities in some central and semi-central areas of Milan. Among these, there are the popular areas of Quadrilatero, Duomo and San Babila, along with new entries such as Corso XXII Marzo, Parco Ravizza and Sempione. Prices seldom go below 8,000 euro/Sq m, while they fall to 4,500 euro/Sq m in the semi-central parts. 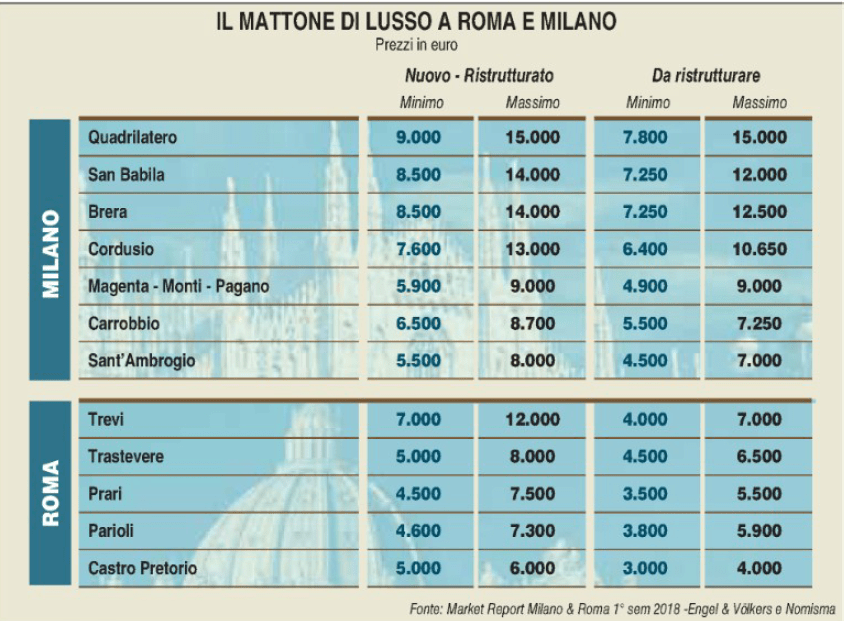 What about the capital city? “The Rome market shows areas with a strong identity which attract different types of buyers”, stresses Marco Rognini, Engel & Völkers general manager for Rome. “As it happens with big cities, people generally focus on areas close to the workplace or well-connected by public transport”.

This is true also for rentals. For instance, Parioli and Prati attract mainly wealthy Russians, Arabs and Chinese, while Europeans and Americans still prefer the city centre. Young professionals represent a good part of the demand in Ostiense-Garbatella, which is becoming a trendy area thanks to its lively nightlife”. For what concerns prices, Rome is not cheaper than Milan. Around the Trevi fountain, prices are between 7,000 and 12,000 euro/Sq m. They drop 8,000 euro/Sq m in Trastevere and 7,000-7,500 euro/Sq m in Prati and Parioli.

What is the outlook for the next months? “Both sales and rentals will grow. But the growth rates will be less proportioned compared to the previous quarters”, warned the analysts. “Considering the figures registered from the beginning of the year, it seems like the market is slightly recovering concerning the number of transactions”, concludes Rognini. “The slowdown in the first months of year most likely reflects the effects of the new Government. The Rome property market will report an increase in transactions in the upcoming months”. What about Milan? “The growth will be less proportionate. The offer relieved by the economic recovery, has excessively appreciated in comparison with the actual purchasing power of the demand”, says Roberto Magaglio, Engel & Völkers license partner in Milan, “As a consequence, the gap between requested price and offered price is gradually broadening. Rentals, on the other hand, are performing well, and the demand has been steadily growing, increasing rent prices”. According to Magaglio, more and more property owners invest on properties to rent to maximise returns and to consolidate their assets. In addition, also institutional investors have started appearing in the prime residential market, considering it as a niche offering a valuable asset class to diversify the portfolio”.

18 May, Kryalos Kryalos Sgr concluded on behalf of the fund Ermes the acquisition of a logistics portfolio composed of...