The closer to the centre, the more profitable the rental will be. Especially if a property is located in the old town. Rents are the highest between Duomo and Quadrilatero. Bande Nere is also very popular among travellers, registering a very high level of occupancy rate. It’s the picture emerging from the Third Observatory on Short-term Rentals by Halldis, the leading Italian company specialised in the temporary rentals on behalf of property owners and mostly catering to tourists and workers. 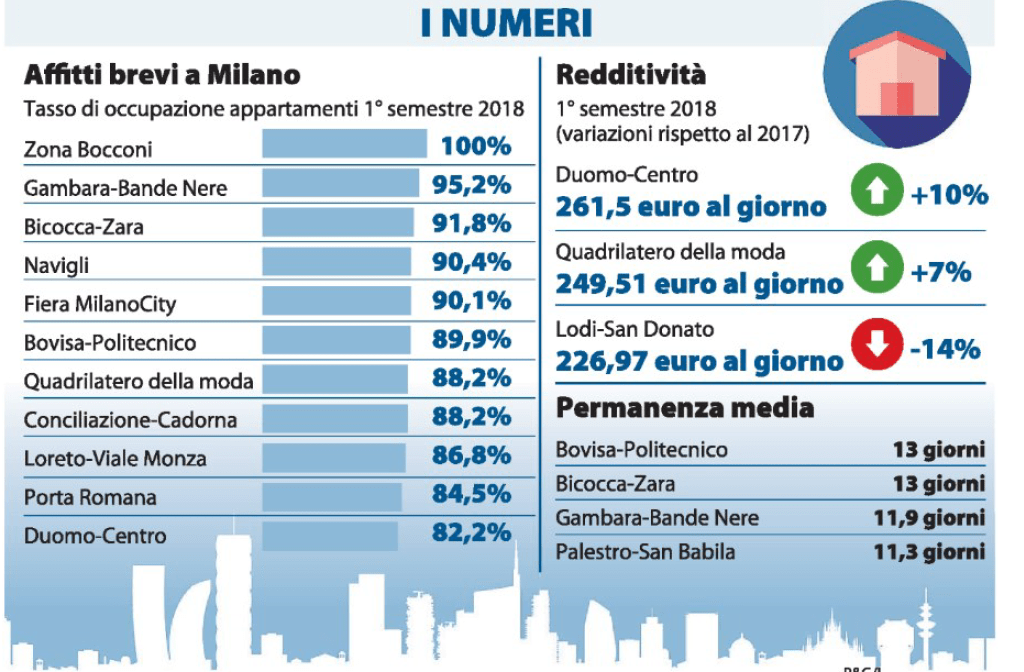 The report analyses the first part of 2018 and compares it with the previous year. It turned out that in the first half of the year the Duomo-Centro area reported the highest average daily price with 261.55 euro (+10%). In 2017 Centro was second, while Lodi-San Donato, in the south-east of the city, was the most expensive, characterised by bigger apartments. This time, the second place went to Quadrilatero, with an average price of 249.51 euro a day, moving from the third place of the previous semester and reporting a 7% increase. Lodi-San Donato is third, still among the first three neighbourhoods of Milan, although its value fell to 226.97 euro (-14%).

On the overall, landlords have reported better results than last year. The first semester of 2018 closed with an average occupancy rate equal to 85.68%, +10.80% in comparison with the same period of the previous year when the rate was 77.33%. The Halldis report notes that “February, during the Woman Fashion Week, registered the highest peak, whereas, in the first semester of 2017, April reported the highest rate (81.08%). Also this result is related to Milan’s events calendar: April is the month of Salone del Mobile (the furniture expo). January reported the lowest saturation both in 2017 (71.56%) and 2018 (80.70%)”.

Vincenzo Cella, Halldis Managing Director, explains: “short-term rentals are a great opportunity for Milan’s landlords, as in most cases they own more than one property. This type of rental allows increasing the return on investment in the property by up to 7%”.