Real estate prices are still moderately decreasing, especially those of dated properties, transactions have recovered, times have shortened both for residential and commercial properties. 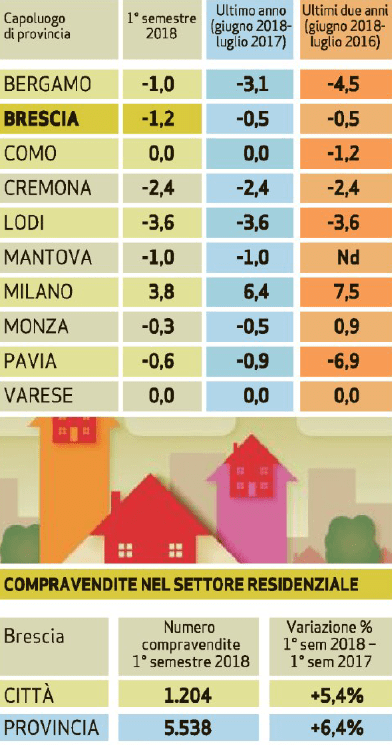 The Tecnocasa report concerning the market trend of the real estate market for the first part of 2018 shows mixed results. The report was presented yesterday at the Confesercenti offices in Brescia by the team manager Marco Anzini and his local team. The event also saw the participation of Brescia City Councillor Valter Muchetti. Everybody stressed how this is a good moment to invest in real estate, as the mortgages are still low, but they’re expected to go up again very soon, same as prices, allowing to appreciate properties. Finally, 5% returns on the gross capital is a very interesting result.

The rent in Brescia of a one-bedroom apartment is around 430 euro, 530 for a two-bedroom apartment. This estimate by Tecnocasa is worth noting, as it comes from an agency with 3 thousand agents in nine countries, 362 affiliates in Lombardy for the residential market only, 11 in Brescia and 7 in its province. The figures coming from the notary deeds confirm the Tecnocasa report.

In the last six months, the residential market recorded 1,204 deals in Brescia, +5.4% compared to the same period of 2017, +6.4% in the province of Brescia. The market is active, showing a cautious recovery of the economy and the better financial conditions of people. The demand is driven by apartments below 120 thousand euro, with the preference on two-bedroom apartments, corresponding to 57% of the requests. Bigger apartments are bought to be divided into studios to rent. Short-term rentals are an emerging trend in Brescia. Young people, aged between 18 and 34 years, make nearly 30% of the buyers, while people aged between 35 and 44 years are more than half of the total. “It’s the sign that there is trust in the future”, comments Marco Lucchetta from Kiron Partner Spa. Purchases for main dwellings constituted almost 90% of the total in the city. The favourite areas are close to the metro line and the hospital. Mortgages are an incentive, as they’re still very convenient. If in 2013 it would take 2,600 euro to get a mortgage loan, now it only takes 2,000 euro. The average duration of a mortgage is 25 years. The average amount is 110 thousand euro. In the second quarter of 2018, mortgages for 300 million in total were issued throughout the province, +9.3% from 2017, above the national average set at 8.5% and below the average of Lombardy set at 10.8%. The spread is still not seen a threat by the Tecnocasa analysts, but they’re waiting how the market will evolve.

As already mentioned, prices are rather steady, with some moderate decreases during the semester. In the last ten years, properties have lost almost 30% of their value, 20% for the houses in the province, thanks to the tourist destinations. The locations reporting the best performances have been Sebino and Franciacorta. New properties recorded better results, while dated properties are less appealing. Properties in Sirmione have lost 4% of their value. Padenghe and Salò have doubled in transactions, and Pisogne increased by 50%. The Garda Lake area recorded the presence of German and Belgian buyers.