“The Garda contemporary dream” has become a mirage. What is left of the lavish real estate project for nearly 50 million euro can be bought now for very little money, so to speak. Hopefully, some investor will decide to give a second chance to Borgo +39, the mega tourist resort on the banks of Toscolano. 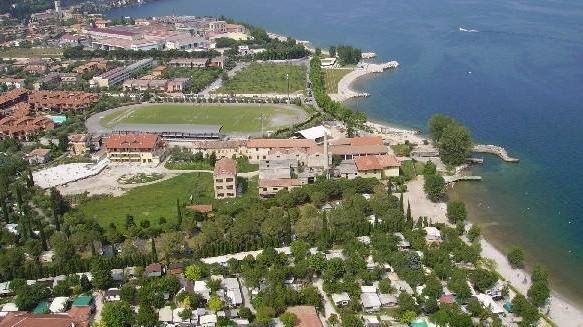 The complex in Via della Religione, including several ex-industrial properties and a liberty-style building, will be put for auction for the fifth time on 13th June. Its value has gradually dropped auction after auction, going from 15 million in March 2016 to the present 4,429,687 euro. The project was assisted by Lord Norman Foster, the international architecture guru hired by Sailing Immobiliare, owned by Azzolini from Arco and Edilquattro from Manerba and led by Lorenzo Rizzardi, the then-president of the Gargnano sailing club and the promoter of +39, namely the ship participating at America’s cup. The architect should have turned the 30 thousand Sq m surface of the former Cantiere del Garda, once Oleificio Sociale Benacense, a neglected historical building, into a luxury hotel, residences and businesses, bars, shops and a restaurant. As already said, the operation was valued 50 million euro for 52 thousand Sq m destined to residential properties with 300 apartments developed on 5 floors, as well as the transfer of the football field to build an underground garage on two levels, one public and one private.

The operation has never been started due to the crisis that hit real estate, the protests, the sit-ins of the environmentalist associations, the torchlight processions, the interventions of the Superintendence. The project was eventually downsized in 2009. Two years after, the recovery plan was rejected by the Regional Administrative Court, that approved the appeal from Legambiente and some privates. As it happened in Campione, also in Toscolano the project was investigated by the court, due to the connections with Francesco Belsito, accused at the time of money laundering and misappropriation. The dossier was filed, but it was too late to save the project. After the property foreclosure, Borgo +39 got completely stuck, awaiting investors. Which now have the opportunity to turn the dream into reality at dirt-cheap prices.

This is a common destiny of many other ambitious touristic-sport facilities of the area of Benaco, like the already mentioned project in Campione del Garda, that were impacted by the recession or that encountered various obstacles on the way. Whereas in the hinterland of Garda, another property will be put on auction in June: the riding club of Bedizzole. It will go on auction for the second time with a starting price of 11 million euro. This is a vast lot comprehending covered stables with a racecourse and a tribune, plus a hotel with eight suites, a big clubhouse, and stables and stalls for the horses, apartments for the staff, a veterinary clinic, and two training fields. The requested price is indeed 11 million euro and offers are welcomed. For the second time.

20 November, MilanoToday Lenovo is to open its first European flagship store in Corso Matteotti, Milan, at the beginning of...