The new student district of Roma Tre has born between Marconi and San Paolo. It will accommodate the Rectorate, the Faculty of Engineering in Viale Valco San Paolo, lecture halls and laboratories between Ostiense and Marconi. The works will be completed by 2020. It’s one of the biggest construction sites in Europe with investments for 80 million entirely financed by University’s money. 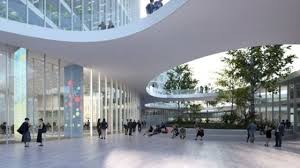 Yesterday the University completed an essential step to start the works: the sales of the land belonging to the City of Rome where the new infrastructure will be built. The city administration has sold the Vasca Navale area in Via Volterra, the old Depositeria Comunale in Via Pincherle, the school “Silvio D’Amico” and other properties in Via Valco San Paolo and Via della Vasca Navale where some lecture halls are already present. The University paid 18 million, always through self-financing, as University’s general director Pasquale Basilicata stressed: “we save money to invest them. We’ve been working on this operation for 26 years”. In the mid-Nineties, Roma Tre just started between Via Segre and Via Vasca Navale, renovating old warehouses and converting them into lecture halls, accommodating hundreds of students first of Political Sciences and then of Engineering.

The Law Faculty was soon added, and the moved to Viale Ostiense. Among its students, there was also current Rome Mayor Virginia Raggi, which took part at the press release yesterday: “I graduated right here in 2003”. Roma Tre is not stopping; the goal for the next three years is to is to complete the acquisition of the former slaughterhouse area in Testaccio and the Berra stadium in Viale Marconi to build a sports centre for its students. Ideally, the University won’t have to buy the land since investing in education is in the public interest. In other cities, the areas like these are free. Basilicata explains: “We hope that the solution won’t be buying the properties, we would rather work together to find out the best way to transfer assets between public institutions”. The University has no money left to complete the other projects. The Rector Pietromarchi commented: “Our role in the improvement of the properties and services in the last 26 years hasn’t been acknowledged, but we’re fine with that. The University has consolidated and will launch the requalification process”.

Before Roma Tre, the Valco San Paolo area was in a state of degradation where prostitution and drugs were common. The City of Rome has earned 18 million euro from its sale. City Councillor for Public Assets Rosalba Castiglione says: “we’ll re-invest the funds in the city”. Mayor Raggi says: “we’ll use the money for the maintenance of parks and to buy new buses. Each of them costs 250 thousand euro”.