The Quadrilatero area is seeing a lot of activity at the moment, with buildings being sold or put on the market. Number 26 in Via della Spiga, for a long time the “D&G kingdom”, is currently at the centre of attention. The Maison replaced Ralph Lauren in on the most beautiful buildings in Via Montenapoleone and had closed the old store. 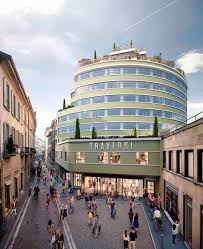 The American fund Thor together with Invesco Real estate bought two years ago the building in Via della Spiga for 130 million (nearly 20 thousand euro per Sq m). Now, the property is looking for new buyers. The owners had initially appointed the consultants of Cushman & Wakefield to optimise the returns from the lease, looking for renting the property. There were indeed several potential candidates. One of these was Decorte, the Japanese brand of high-end cosmetics, which considered the location to open a Spa; and Buccellati, which is about to open a jewellery store in Ottagono and was also among the candidates for the property in Via Montenapoleone, now occupied by Dolce & Gabbana.

According to the financial sources, the jeweller has been evaluated the property for months, assessing the feasibility and several projects till the end of the summer. The objective was to open a luxury hotel and a boutique related to the brand. But it must have changed its mind in the last few days due to the failure in reaching an agreement on the lease. The total proposal amounted to 9 million euro a year. At this stage, the owners might give up renting and sell the property directly. The requested price is set around 200 million.

Not far, in Via Bagutta, the former Traversi garage, which is undergoing renovation works for 30 million euro, has also been sold. The private equity fund Hayrish bought the property in 2016 for 64 million, and one month ago Invesco RE acquired it for 100 million: a remarkable capital gain, 70%. However, the plan won’t change: shops on the lower floors and restaurants and events on the top floor.

Invimit to sell Covivio shares in the Dante Fund

03 January, Monitor Immobiliare Invimit has recently gotten the approval from Consob for the sale of the shares held by...