The group Lindorff-Intrum has won hands down beating all the competitors and closed the operation sooner than expected. Yesterday the group announced the agreement for the acquisition of CAF spa, the Rome-based servicer owned since 2015 by the private fund Lone Star. At the same time, Intrum bought also the NPL portfolio for 370 million euro gross that Lone Star bought in 2015 from Cassa di Risparmio di Teramo (Tercas). The portfolio includes secured and unsecured positions concerning retailers and SMEs. 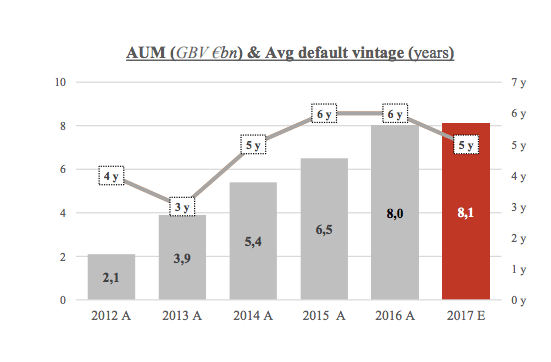 The auction assisted by the advisor Kpmg saw competing also Cerved, MBCredit Solutions, TPG and Varde. It was expected that the advisor would have selected a short list of the competitors to arrive at the binding offers by the end of the year. But the offer made by Lindorff-Intrum has won over all the competition. The investment will be funded with credit the lines available to Intrum.

The total value of the operation, including CAF and the portfolio, is equal to approximately 22 million euro, of which 80 million is the portfolio value (hence assessed as 21.6% of the gross value). Whereas the servicer is valued over ten times more the EBITDA value and eight times more than the 2017 EBITDA value, namely 10 million (6.3 million in 2016), hence way higher than the amount paid by the fund two years ago (it might have paid it between 20 and 30 million).

The service business, without considering the return on the investment in the NPL portfolio, is estimated to generate in 2018 earnings for about 30 million with an EBITDA of approximately 11 million euro. CAF has registered earnings for 19.1 million euro in 2016, from the 17.7 million of 2015 (when it registered an EBITDA of 4.4 million), with profits for 4 million compared to 2.4 of 2015 and a net debt of 2 million (from 2.1 million).

CAF was established in 2005 and it operates in credit collection as a regularly registered company as per the article 115 TURPS, with a Standard&Poor’s rating above average. The company is currently managing credit portfolios for a total of 7.6 billion euro, composed of 2.5 billion euro secured credits (residential and commercial) and of 5.1 billion-euro unsecured credits issued to SME s and families.

“Thanks to the acquisition of CAF and the NPL portfolio we’re consolidating Intrum in Italy, confirming our balanced business model and strengthening our strategy as the leader in the credit services sector”, commented Mikael Ericson, Ceo and President of Intrum Group.

This is the third acquisition for the group in Italy, after that of Gextra last May, bought from Italfondiario and its founder Francesca Carafa, that stayed in the team, and that of Cross Factor in the spring of 2016.

doBank is about to conclude the negotiations with Altamira

21 December, Milano Finanza The negotiations between doBank and Altamira are at an advanced stage. According to El Confidencial, doBank,...