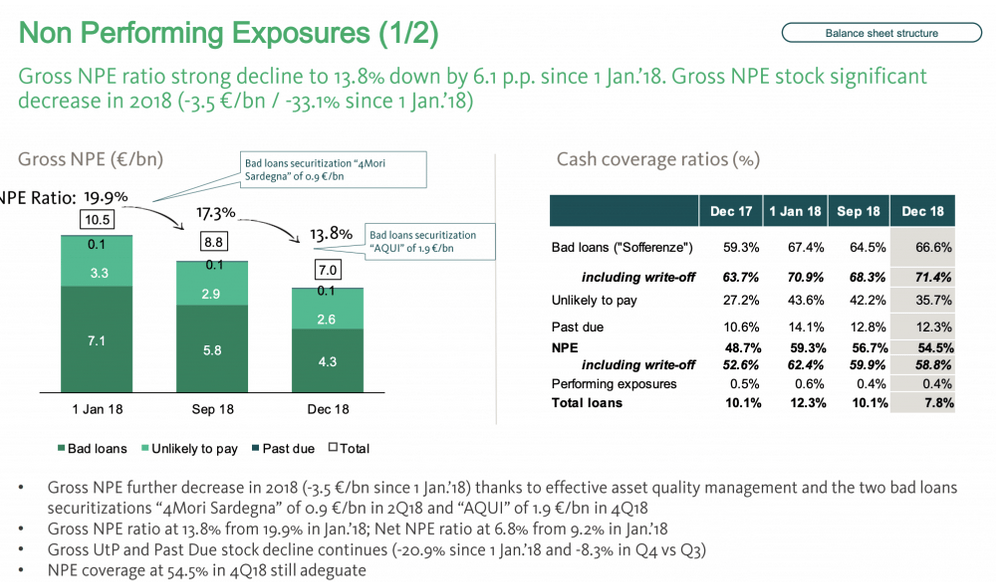 Unipol carried out the operation through UnipolReC, a company fully owned by Gruppo Unipol and created from the spin-off represented by the impaired loans held by Unipol Banca. The portfolio is composed for 68% of unsecured loans and for 32% of secured loans.

Last November, BPER Banca completed the securitisation of an NPL portfolio for 1.9 billion euro through the spv Aqui srl, following the securitisation of a first portfolio amounting to 900 million from Banco di Sardegna through the spv 4Mori Sardegna srl as it was announced last June. As a result of these operations, the total impaired loans in December 2018 dropped to 7 billion euro gross, while the NPE ratio was set at 13.8%. With this new operation, the gross NPE ratio has fallen to 11.6% pro-forma. The result is compliant with the target of 11.5% forecasted for the end of 2020 in the NPE Plan 2018-2020.

This last transaction is part of the recently-announced operation concerning the acquisition by BPER of Unipol Banca from Gruppo Unipol for 220 million euro and, at the same time, the acquisition of 49% of the capital of Banco di Sardegna from Fondazione di Sardegna upon payment of 180 million cash and issuance of new shares subscribed by Fondazione itself, bringing the quota held by Fondazione in the BPER capital to 10%. Meanwhile, Fondazione has subscribed for 180 million euro a BPER newly-issued convertible bond of type AT1 with the nominal value of 150 million. If the bond is converted, Fondazione might achieve 15.4% of the capital, becoming the second shareholder after Unipol, which currently holds 15% of BPER, although it has recently announced its intention to achieve 20% of the capital.

BPER was assisted in the operation by Citi concerning the financial matters, by Prelios for the NPL part, by Legance Avvocati Associati and Orrick Herrington & Sutcliffe regarding the legal issues and by BCG for the industrial part. The completion of the operation is expected by the second half of 2019 pending the suspensive conditions, especially those concerning regulations and authorisations.

For what concerns UnipolRec, the company closed 2018, its first year of activity, with a positive net result equal to 6.9 million euro. The stock of gross bad loans has decreased by 311 million euro (10% of the stock) given incomes for 95 million and a recovery ratio of 31%.

02 June, Bebeez The Elliott fund, together with its minority investor Blue Skye, sold the iconic Bauer Hotel in the...