The new Pelli project is starting in Porta Nuova. Next month the old Inps headquarters will be demolished, then the construction works will last 2 years. Tall as the Unicredit tower and with photovoltaic panels on 5 thousand Sq m of its surface. 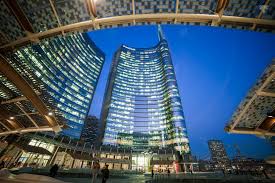 It will be an autonomous building with energy originated for two-thirds from renewable sources. And it will be the first in the city built cradle to cradle (CEC), one of the latest construction philosophies that eliminates waste. The construction site in Porta Nuova is opening this autumn, the building will replace the former Inps headquarters in Via Melchiorre Gioia. It will be even more innovative than the Unicredit tower, also signed by César Pelli, very environment-conscious as well. Also in the name of environmental awareness, there has been recently the collective planting of the seeds in the fields that will become the Library of Trees.

Over two thousand citizens took part in the event, as a way to get them more involved in the project. The event was organized by the Catella Foundation in the future public park of Porta Nuova, it will be completed by spring of next year and will open in summer. It will have 450 trees of 19 different species and 90 thousand plants among bushes, hedges, vines, and ornamental and garden plants. The park is signed by  Petra Blaisse and Piet Oudolf and it will not be the last intervention for the transformation process of the area. Then it will be the turn of the building Gioia 22 by Coima sgr, for a cost of 75 million and destined entirely to offices. The works to get rid of asbestos in the 18 storeys building built a half century ago and left empty for five years have finished. The construction site will open in October to get ready for the demolition. Then the construction will start with the new year. The works will last 2 years and the skyscraper will be roughly as high as the Unicredit tower with its 31 floors. Very sustainable. The building will have triple window glasses to protect and isolate and 5 thousand Sq m of the surface will be covered by photovoltaic panels to contribute to the energetic requirements. Groundwater will be used to condition the air inside the building. The lighting system will be entirely led operated. Besides, to promote eco-friendly mobility, bicycle parking spaces and changing rooms with showers will be provided to the office workers. Finally, the zero waste philosophy will be applied in order to implement a circular process where the same material is not only collected but also re-used for the same purpose. In this way, the consumption of natural resources, more and more precious these days, will happen only once.

26 August, Bebeez Banca Popolare di Sondrio sold an NPL portfolio for the value of one billion euro. The bank’s...