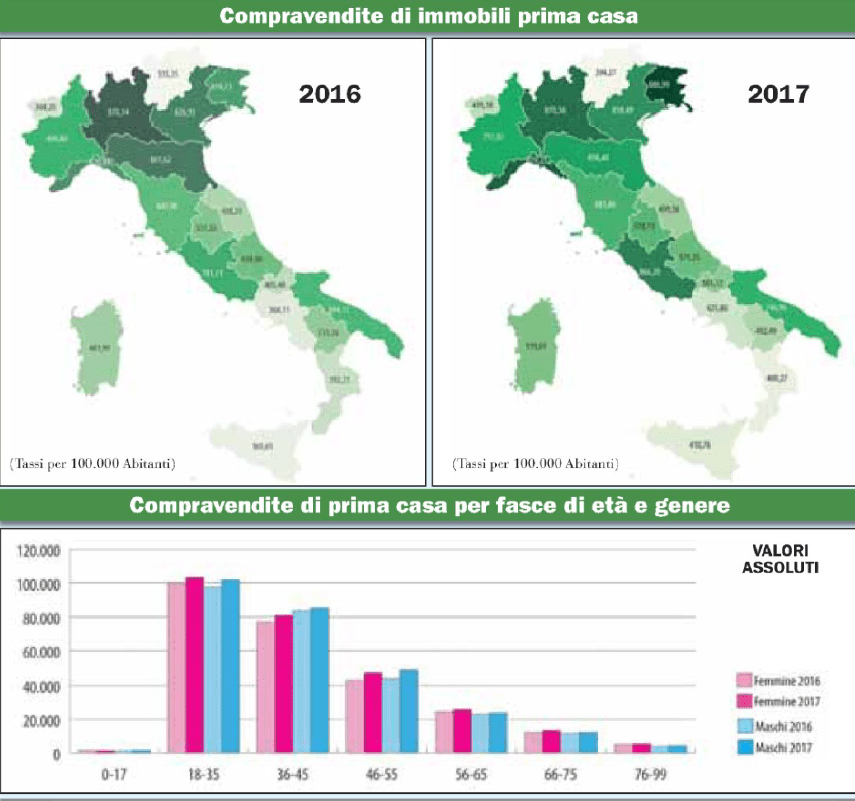 Moreover, transactions by privates have been the main driver of the market: 90.78% of the houses sold in the first half of 2018. Meanwhile, sales by companies are at a standstill with only 9.23% of the transactions.

Finally, the increased national revenue originated by houses between 2016 and 2017 might also be due to “a higher cadastral value of the properties bought throughout the previous year as a result of the gradual updating by city administrations of the Land Registry Income”. A study by the Notaries National Council and processed by Nortatel Spa (the notary IT company) clearly shows this situation. The report processes the data provided by 98% of the active notaries. The figures also monitor moveable and fixed assets, mortgages, donations, enterprises and companies related to the first semester of the current year. The report includes an in-depth analysis of the tax reliefs granted in 2016/2017.

The purchase of the main residence

The report shows how three regions registered an increase in transactions between 2016 and 2017, despite the negative national trend:

Campania with a +15% growth and a corresponding rise of the national revenue collected equal to +14.73%;

On the other hand, Abruzzo is the only region reporting a negative result concerning property transactions (-12.50%) and revenues (-9.95%).

The analysis by Notaries of the 2016/2017 period shows the impact of the tax relief for the purchase of agricultural land resulting in a 22.88% growth in 2016 and 20.84% in 2017. As the notaries report: “land tax relief concentrate in Piedmont, Veneto and Puglia”. For what concerns the age range, farmers aged between 36 and 55 years represent the biggest quota of requests for tax relief. Young people (18-35 years) are 16.88% of the total tax relief applications, while people between 56 and 65 years are 18.52% of the total.