The end is close for property funds, even though with chances of change and relaunch. Born in at beginning of the ‘00s with big ambitions, these funds have turned out being a disappointment, severely impacted as they were by the recession that coincided with the end of their duration. Actually, they were born at the peak of the cycle of real estate and they found themselves ending at the lowest point of the sector. From this situation, a series of extensions has originated to try selling at the best price possible the assets still in the portfolios, with negative or very poor performances. The scenario is completed by the little liquidity of the market (with discounts of 30%-60% between price and NAV), making not possible for investors exiting from the investment by selling on the market to avoid losing up to 50%-60% of the capital account. Of the 26 funds launched a couple of years ago, roughly just 20 of them are still in place, and their number is destined to halve next year and to disappear completely by 2020-21. In the meanwhile, Siiq have been introduced in the market, namely listed companies for investments in real estate, with tax benefits and without the pre-determined duration of property funds. Nowadays, there are nearly one dozen Siiq, even though not of big dimensions (along with the veteran Beni Stabili, there are now Coima Res, Aedes, and Nova Re), but their number might increase in the future. Too bad their performances are not brilliant, in this case not because the actual performances are disappointing, rather due to the lack of trust by investors. The last frontier of the secret is represented by Pir, namely individual saving plans. Also in this case, these instruments feature tax reliefs on returns, and, thanks to the latest Budget regulations, they can now invest in real estate, directly or through other financial instruments. The hope is for these new instruments to relaunch real estate and give a new impulse to its growth, just like it happened to SMEs. 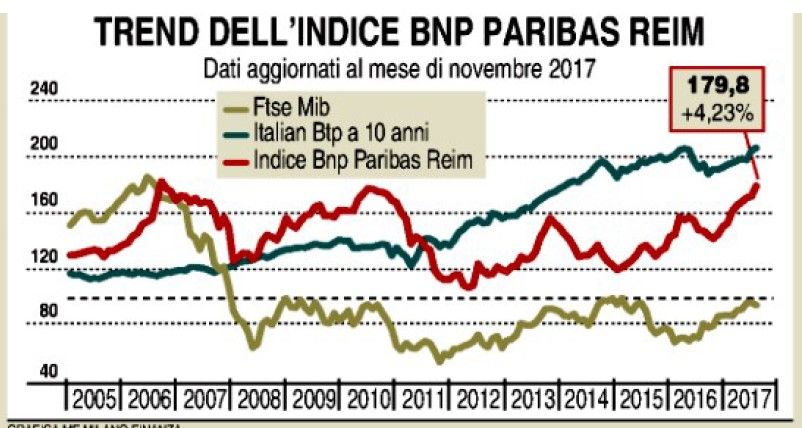 Siemens investing in the Adriano area in Milan