Good signs are coming from the Capital concerning some important projects connected to the image of the city itself. The project regarding the new Roma FC stadium – which last week completed the crucial phase of appointing services – makes hope for an awakening of the projects in important public spaces in the city. 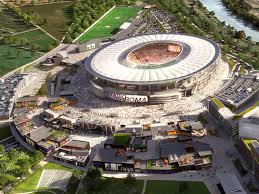 The latest and most significant news regard the renovation of Piazza Augusto Imperatore (beside Ara Pacis) which, according to the project by Francesco Cellini, will make possible for people to walk at the same ground level as in the times of the Romans. It’s already known that Tim has financed the current renovation works of the Mausoleum in the centre of the square. There is also the project back in September to transform the former market area, with an order from the City Councillor for urban panning Luca Montuori. The “promise” is to reopen the construction site- still hasn’t happened yet – to complete the intervention by 2020.

But the real news for the city will be in Tor di Valle, with the maxi-intervention to complement the works on the stadium. After the approval of the appointment of services, the other two critical steps are the planning and the agreement with the sponsor for the real estate/sports initiative. This is not an urban transformation, rather a new development involving the whole neighbourhood. The intervention will imply also investments in transportation, viability and public works.

Finally, the Shoha Museum proceeds with its schedule as planned by Zevi-Tamburini. After having solved the issues around the coverage of the work assures Zevi, the executive project will be delivered by the end of the year, the launch of the tender and the start of construction will start in 2018.

The future Milan starts from its old train yards

08 December, Avvenire The House of Energy and Environment in Piazza Po will exhibit till 28th December 38 pictures of...