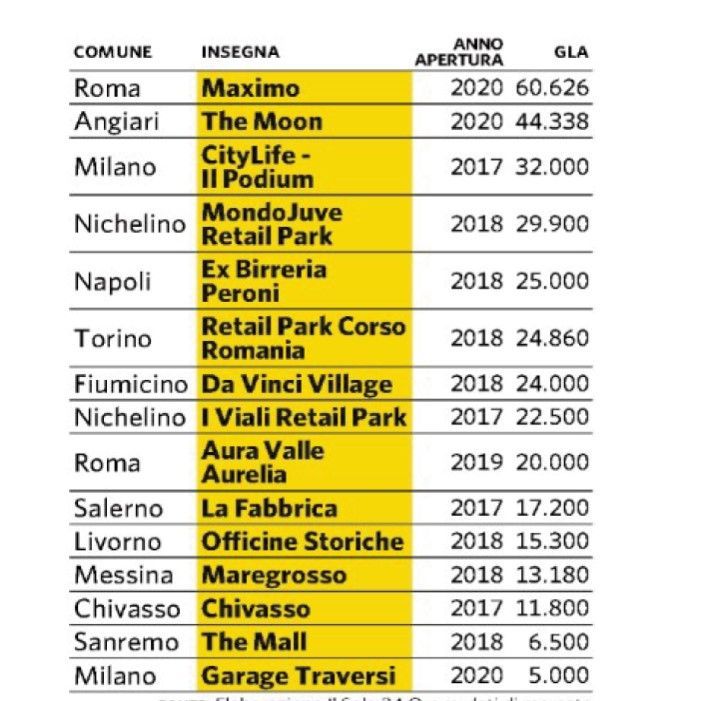 A mild wind is blowing in the world of shopping centres, which goes on at limited speed towards a positive end of 2017.

This is the scenario presented by Cncc, the national council for the sector, that is going to be presented this afternoon at the conference “Shopping centres and investors”, taking place in Milan in Palazzo Visconti.

“The turnover is aligned to that of the last year – says Massimo Moretti, Cncc president – therefore, retail is still in good shape, especially for what concerns the High Street segment. Concerning shopping centres, the turnover for the first nine months has set around 500 million euro against the 470 million of the previous year”.

Moretti, however, is worried about the comparison with Spain, which has the double of Italy’s turnover even though with smaller returns by 50 basis points in real estate. “We have less attractive power – he says – our problem is not only the more and stricter bureaucracy but also the inability to represent our strengths abroad. There’s a problem of how the country presents itself that it not only connected to the Government, but also to companies, associations, and whoever has relations with foreign countries”.

According to Bnp Paribas, the volumes of real estate in the first nine months of 2017 have been around 6.8 billion euro, with a growth of 28% in the retail segment. Jll sees the year concluding with volumes of 9.1 billion euro. This is a cautionary estimation, according to some operators.

In Italy, 15 new shopping centres are coming, from North to South, from now to 2020. Cbre stresses that in Italy the density of shopping centres is more contained in comparison with other European countries, and more significantly compared to the United States, where the recent trend is to abandon shopping centres.

According to Roberto Zoia, Cncc president for the real estate development and investments commission and Igd development and asset management director, the hypermarkets are suffering the most, whereas arcades are still registering a good number of visits. “Many chains are reorganizing and restructuring – says Zoia – as Igd, we’re working on this. To keep a space competitive, it’s necessary to maintain the high the level of shopping centres, in terms of turnover of the shops as well as in terms of being dynamic in planning spaces where people can spend some time”. For this reason, food courts are a vital point and the trend about them has recently started, with all the operators are working on them. Not only, the modern shopping centre becomes a meeting point, and it’s possible to find here also services, clinics and medical analysis centres along with a dentist and alteration shop.

From abroad, Italy is perceived as a fertile land for what concerns real estate. Investors are still focused in Europe, according to Cushman & Wakefield.

“The country is seen as a destination – says Roberto Fraticelli, Ceo for Eurocommercial in Italy and Cncc member of the operative council -, investors are wondering whether the market is liquid enough to exit from investments without damages in the future. At the moment, the Italian market is benefiting of capitals moving from countries that have become riskier. Who used to invest in Turkey has moved his focus toward Italy, as well as many have redirected their investments in the Mediterranean to the country, plus the political problem in Catalonia has increased the risk of Spain”. Following the same logic, Brexit caused the move of capitals toward France and Germany last year.

“As Eurocommercial, we have 12 shopping centres in Italy and development and renovation projects – says Fraticelli- Our investment plan aims at investing between 400 and 500 million euro. We’ve been waiting since 2014 for the approval for an extension of 20 thousand Sq m for the Carosello in Carugate (Milan). This implies an investment for 110 million, creating 400 new jobs and 14 million will be invested to improve the viability. Ten thousand million will be invested for the sustainability with the creation of a green roof in the extension”. The authorization of the project is up to the administration, and certainly waiting years for an answer does not make the Italian market very attractive to the eyes of the international investors. Much better a straight no. Proposing as a country where to invest also means providing sure information and dates, transparency, and efficient bureaucracy.

03 November, Gazzetta di Reggio A merger between private builders and cooperatives had the merit and the opportunity to build,...