The transaction record of real estate in the first nine months might continue, according to the experts of the sector, thanks to the potential of hospitality and logistics, and especially high street. 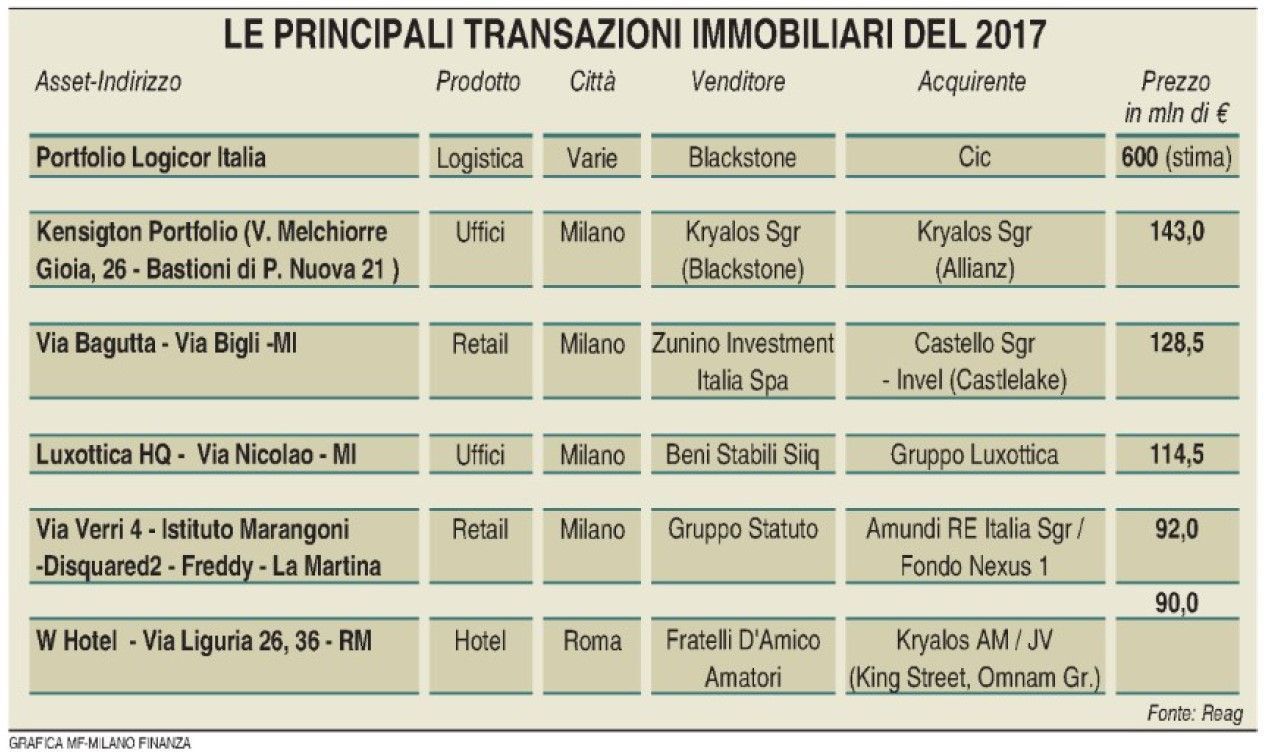 Ongoing record of direct investments in real estate. After the lower point of 2012-2013, the amounts have gradually risen and exceeded the pre-crisis record registering a new one. This year, after the 7 billion reached at the end of September (+30% compared to the previous year), the result of 9 billion be the ned of the year looks totally feasible. But this is not the only result achieved. “If considered the 12 months starting from October 2016, in fact, we can see how the total investments have reached already 10 billion”, explains Daniele Martignetti, head of Capital markets for Bnp Paribas Real Estate Advisory Italy, “more importantly, they exceeded those of Spain, that have always preceded Italy, attracting European investments. The main European markets are namely Germany, Great Britain and France with transactions between 40 and 50 billion (with Germany surpassing Great Britain for the first time), followed by Sweden and Netherlands with 12-13 billion and Italy and Spain with 10-12. The performance according to the single cities is positive too, with Milan placing 4th-5th in terms of attractivity after London, Paris and Berlin. “The Italian trend is very encouraging, also because it indicates that the market is now liquid, reassuring investors”, stresses Martignetti. “The lowest point of transactions for a value of 1.5 billion is long gone. Certainly, we’re still far from achieving the market potential at its fullest, considering that Italy is the third European economy, also due to the fact that the country is still not very “international”. But for the first time this year, two Italian investors, Empam and Enasarco, invested abroad”.

The little internationalisation of investors is not the only limit. There is a lack of some types of assets capable to attract foreign investments. For example, the dimensions. In Germany, the biggest transaction reached one billion, in Italy, transactions rarely exceed 100-150 million, with a few exceptions such as Porta Nuova or some portfolios. “It’s explained then the absence of Asian investors, especially Korean, which don’t buy anything below 100 million euro and are instead present in markets such as Poland”, continues Martignetti. “Not only, some of the segments with more potential, such as logistics and hospitality, have to compensate the limited offer of other segments”. For instance, concerning the hotel sector, that has been very dynamic in the past few years, the offer for five-star hotels or big business hotels with 300 rooms is not enough in some cities. Logistics too can offer good margins, having registered in the last period transactions for 800 million euro, 10% less than the market.

“These limits represent a great opportunity for development”, continues the expert. “And they’re not the only ones. The high street segment, namely the luxury shopping streets, has good perspectives too and it’s now expanding. This is a very interesting segment because it offers opportunities for many cities: if offices were the only attractive market, only Milan would be left competing, whereas we’ve seen German funds buying in the main streets of Padua and Bologna”.

The big real estate market remains Milan and partly Rome, anyway. There is great expectation for the development of Piazza Cordusio, the completion of the two City Life towers, and maybe the construction of a third. In Rome, the hospitality sector continues doing great, but offices might reserve surprises too. “All the international companies want offices in the capital and around Eur the space is available”, concludes Martignetti. But the future for the Italian real estate can count also on other new entries. For example, Blackstone has transferred a property portfolio to Allianz. This is the first operation after the crisis that an investor sells to an institution, a sign that Italian real estate is approaching a second development phase, perhaps less tumultuous but lasting in the medium-long term.

25 May, Milano Finanza The real estate investment fund Alpha managed by DeA Capital sold an asset in Via Casilina,...