The social centre “Cantiere” in Stuparich Square has been occupied for four years. The Court: the safety conditions must be checked 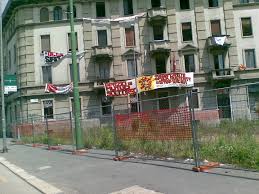 An official from the Court will make sure the Municipality sends a delegation of its experts in Stuparich Square to verify the conditions of the buildings and assess the absence of risks to the public safety. The order is contained in a verdict from the Council of State.

Palazzo Marino will have to arrange the inspection within a month and it must be accompanied by the representatives of the two real estate agencies that own the three buildings, that the social centres have been occupied (especially “Cantiere”) since April 2014. Since then, the occupation by “Sms- Spazio di mutuo soccorso” (mutual aid space), that manages a gym, a language school and a market inside the buildings, is a critical issue for the Municipality. On one side, there are the two companies, requesting an action by the administration, accused of being too soft toward the group due its political preferences, on the other side, there is the Municipality of Milan, with its decision of no intervening, believing that the situation must be addressed by the Court and the police.

The Municipality had to intervene on the safety conditions following additional Court sentences after a cornice fell on the street risking to hit a person (there is a charge for this episode). The centre of the debate is exactly here: if there are dangers for the public safety, the Municipality may intervene to vacate the buildings. For this reason, the administration states that “There are no threats to the public health and safety”. But the owners believe the contrary: because some maintenance works were suggested to the occupants, plus the company hadn’t been invited to the previous inspection, that took place with the representatives of the social centre. On this matter, the Council of State quotes the report by the Municipality dated 15th September 2016, which explains that the occupants took part in the inspection, showing the common spaces, as well as some apartments” and that “during the inspections, some works on the buildings were suggested to the occupants, for which it was assured an action would have been taken”.

Palazzo Marino is right on one point, that is when the Court ordered to tone down the language used by the companies, judged offensive by the Municipality. Phrases like “disturbing harmony between the administration and illegal occupants”.