Bad for banks, the new ECB guidelines are instead an opportunity for servicers, there are about 200 of them in Italy. With margins that can go up to 30%. 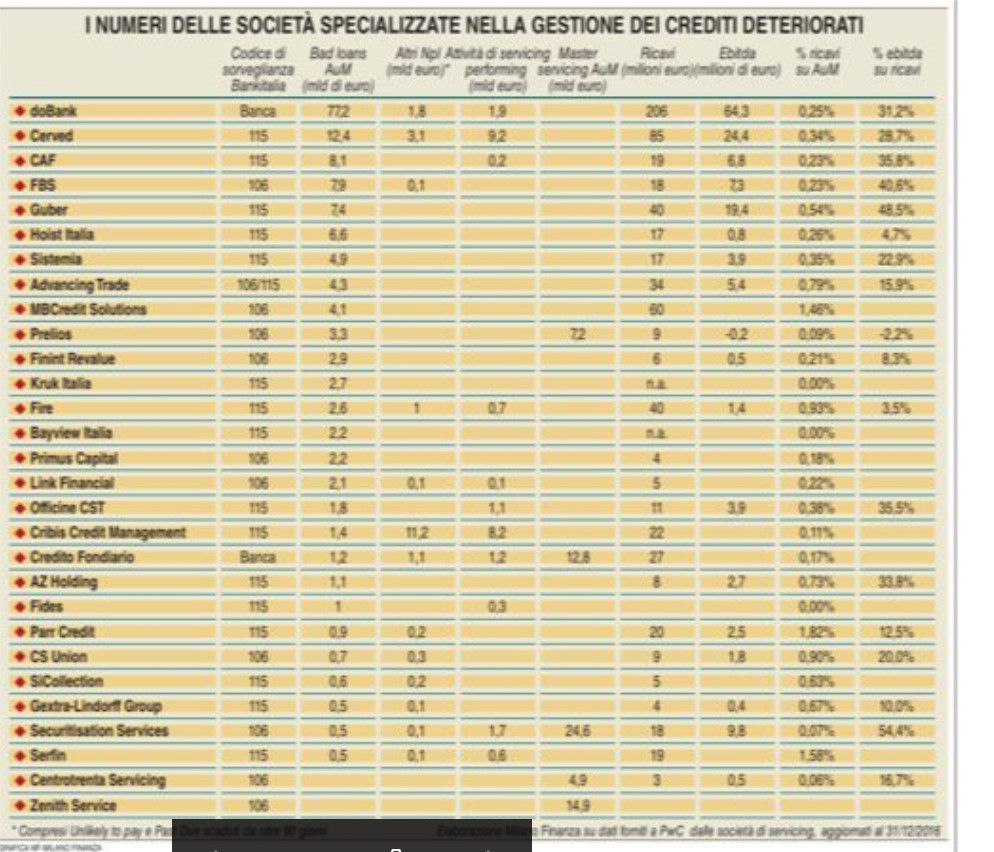 An avalanche of bad loans is hitting the Italian market, more than expected so far. At the end of July, PwC forecasted that the sector should expand from 135-155 billion euro NPL managed by specialised companies (as assessed in 2016) to 200 billion in 2018. But the ECB guidelines, imposing the banks to depreciate their credits in short times, will accelerate this process. The new guidelines from Frankfurt must have been a shock for banks’ managers who, starting from 2018, will have to deal with automatic devaluations. In fact, after seven years, secured bad loans (backed by real estate) will be written off from the financial statements of the banks monitored by ECB. Whereas for unsecured loans, if on the books as NPLs, after two years they will be 100% accrued.

Credit Suisse has assessed that the six main Italian banks (Unicredit, Intesa Sanpaolo, Mps, Ubi, Banco-Bpm, Bper) had in the second quarter of 2017 NPE (non performing exposures, they include bad loans, unlikely to pay, and past due) for a total a value of 206.173 billion euro. A big problem for banks’ managers that will have to get rid of them, a big opportunity for servicers. Servicers are those companies, about 200 in Italy, that have refined the old art of credit collection, a sector destined to grow quickly in the future, proving that is possible to create value from the banking sector.

As we can see from the chart based on the figures provided by PwC and elaborated by MF-Milano Finanza, for what concerns profitability (the incidence of earnings on the assets represented by gross NPLs managed and the ratio between EBITDA and earnings), servicers can achieve margins up to 30%. In some cases, these companies are also fully licensed banks, for others the transformation into bank will happen very soon. Plus, it’s not to exclude that some of them will be listed in Piazza Affari in the future. For instance, the group Az Holding Spa has entered the Elite program of Borsa Italiana, a program aimed at training societies and guiding them towards the Ipo, namely the allocation in the Stock Exchange. The main operator in the Italian market is indeed a bank, doBank, listed on the Milan Stock exchange since 17 July at 9 euro and, as per 6 October, it has stocks traded for 12 euro, 30% more in less than three months. DoBank, part of the American group Fortress, at the end of 2016 had NPLS for a value of 77.2 billion, thanks also to the 17.7 billion Fino portfolio from Unicredit (together with Pimco). According to MF-Milano Finanza, now the company is aiming at a second Unicredit portfolio of a value around 1 billion euro.

How much profit can a servicer make? If we forecast a revenue for 100, 50 is the expenses for qualified personnel, 30 for investments in specific software, there is left a margin of 20 that could be raised up to 25. As confirmed by Guido Lombardo, manager for the banking activities at Gruppo Fondiario(controlled by Tages Holding, where managers have a minority quota), “I would say that a 20% margin is already a good result”. Credito Fondiario should close 2017 with 38 billion managed credits, 4 of which in special servicing, and a Tier 1 capital at 15%. Nowadays it has 130 professionals against the 50 of three years ago, and the company plans to reach 150 employees by the first quarter of 2018.

Servicers can be divided into three types according to the license they have corresponding to the complexity of their activity. The code 115, the only one not monitored by Banca d’Italia, unlike the other two, “It’s easy to obtain, the company can do credit collection and it usually operates at a local level”, explains Vito Ruscigno, PwC partner that has carried out a comprehensive work on the sector with the title “The Italian NPL market. The place to be”, published last summer. “The 106 license is given to regulated medium-sized companies. They can do surveillance activity, as well as issuing loans to other societies. Then there are banks such as doBank and Credito Fondiario”.

Ruscigno confirms the trend of servicers transforming into banks, anticipating also that some companies “are thinking about it, but it’s still too early to assess how many servicers in Italy are ready for the transition”.