At the end of 2018, Dea Capital Real Estate sgr launched two new real estate funds, both underwritten by international investors and invested in assets located in Rome. The first operation of the asset manager of Emanuele Caniggia concerns the fund GO Italia IV which is fully subscribed by international institutional investors for a value of over 40 million euro. The new fund took over from Banco Bpm a portfolio of prime assets in Rome city centre. The properties are mainly for office use, and the portfolio also includes the Bpm office in Via Luisa Savoia, between Piazzale Flaminio and Via Romagnosi, just behind Piazza del Popolo. The building is consisting of two towers of five floors each. 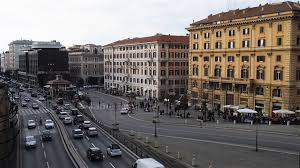 Meanwhile, the asset management company also launched the Laurus fund which acquired five office buildings in Via Laurentina and Via del Serafico in Rome for a total value of around 170 million. The complex was sold by Caceis Bank (German Bank group) as a depositary of the fund Seb ImmoInvest.

On 21st December, Villa Stuart was officially transferred to Tessalo, an alternative fund dedicated to healthcare assets which was launched last August with the transfer of six assets from Eurosanità group, a leading company in private healthcare management in Italy. Besides Villa Stuart, one of the biggest orthopaedic clinics in Italy assisting athletes and football players, the fund also includes the clinic Quisisana in the Parioli neighbourhood and Policlinico Casilino, near Torre Maura and Torre Spaccata areas.

With these new real estate funds, Dea Capital Real Estate Sgr had reached assets under management for over one million euro over the course of 2018. Following the group’s strategy, the managed assets remain at a steady level set around 9.5-10 billion (for 46 real estate funds). This means that to one billion of assets acquired in 2018 corresponds a similar amount of asset sold over the year (over 540 properties for a total of 950 million) due to sales and funds reaching their maturity. The objective is holding an up-to-date portfolio, in terms of rating as well as in the type of property, in order to best meet the investors’ needs, as the interest for the new segments of real estate such as healthcare and logistics grows.

According to Ceo Caniggia, a further growth of the portfolio wouldn’t be compatible with the volumes of the Italian market. For this reason, the group in 2018 started to expand on the international markets with the creation of Dea Capital Real Estate France, which is the first step for the creation of a Pan-European real estate platform. In 2019, the company plans to implement similar entities in Spain and Poland, one of the most thriving property markets in Europe at the moment.

Finally, the listed real estate fund Atlantic2-Berenice has recently reached the maturity. Since its allocation with 500 euro, the fund has distributed to its subscribers 723.21 euro per shares and is about to issue the final liquidation statement.

How the mortgage market will evolve in 2020

19 December, Idealista Despite the declining trend of mortgage rates expected to end at the beginning of 2019, rates turned...