Milan is changing its look again. There are over 40 construction projects in the pipeline for the next years for a total surface of 12 million and 500 thousand Sq m. The total investment will amount to 21 billion euro. These are some numbers taken from “Milan over the rainbow”, the 2018 real estate report by Scenari Immobiliari with the collaboration of Vittoria Assicurazioni. There had been already some projects that reshaped the look of the city, such as City Life that occupies the area of the former exhibition, or Portello-Porta Vittoria, in the former Alfa Romeo factory. Whereas Santa Giulia aims at “a qualitative development of the residential function” over 270 thousand Sq m and offices occupying 300 thousand Sq m. 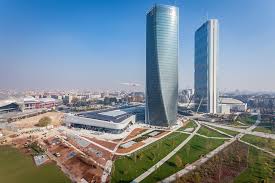 There is also the requalification project of the seven old train stations, whose agreement was signed last years. The project concerns an area of 1.2 million Sq m, from Farini to Rogoredo, mainly for the implementation of residences and green spaces in half of the surface. There are still no certain plans for Piazza d’Armi and the old military warehouses, about 290 thousand Sq m, 250 thousand destined to residential properties. The regeneration will also concern the space of nearly 1,000 Sq m in the Vittorio Emanuele gallery, property of the Municipality, which will be turned into a hotel. “The territory is located in the old town of Milan, and it has a surface of 12.5 million Sq m. The developed surface is 6 million Sq m, and it will be destined to residential properties (2.9 million), offices (1.2 million) and businesses (800 thousand), as Francesca Zirnstein explained, the Scenari Immobiliari director. It will be a global improvement of the quality of life in the city”. Public services, like hospitals, libraries and schools, will occupy a surface of approximately 700 thousand Sq m, while the spaces open to the public will be equal to 4.3 million Sq m and corresponding to 34% of the urban surface.

Mario Breglia, president of Scenari Immobiliari, comments: “The urban renaissance of Milan, in a country that is still stuck in the middle age, is strictly connected to economic and cultural changes of the city. From technological innovation to culture, Milan has been the most consistent urban transformation at European level of the last 30 years. The growth is harmonic and it’s integrated with some fast-growing sectors such as design, academic and scientific research, technology and healthcare”.

Houses: the demand has grown

06 June, Il Giornale There are 9.2 million families that are excluded from the property market, namely those who can’t...