A couple of players will deal with Banco Bpm to define the last piece of the de-risking plan. According to the Milano Finanza, the Board of Directors of the bank led by Giuseppe Castagna will meet on Friday 3rd August regarding its NPL disposal plan. The so-called Project Ace is on the agenda, concerning the revaluation of a portfolio amounting between 3.5 and 9.5 billion. The price differential is rather broad, and it will be reduced in the later phases of the process. In fact, the bank might decide whether to sell only one single portfolio, as it has done so far, or to transfer the management platform too, bringing the nominal total stock close to 10 billion. In conclusion, it will depend on the price investors will bid and on whether the operation will be economically convenient. 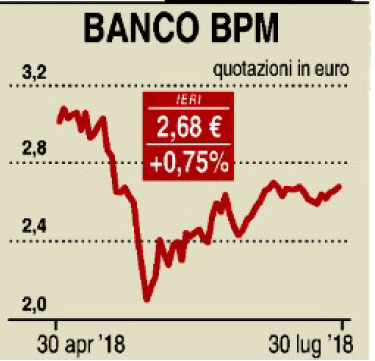 After having gathered the non-binding offers, the bank did an initial screening at the beginning of July when the submission of the binding proposals. Among the candidates, there are allegedly six teams: Tpg-Crc-Davidson Kempner-Prelios (assisted by the advisors Mediobanca and Rothschild), DoBank-Fortress (with Citi), Credito Fondiario-Elliott (with Goldman Sachs and Cbre), Varde-Guber, Cerberus (with Lazard and Vitale), and Pimco-Phoenix Asset Management. The predictions say that the first two teams are the favourite to be included in the shortlist, but last-minute changes are not be excluded. What is certain is that the negotiations to define the operation will resume after the summer and will probably conclude during the autumn. Banco Bpm, with the assistance of the advisors Deutsche Bank, Kpmg and Akros, will have to reach a deal to meet the objectives set with the ECB. In this way, the bank will have cleaned up its assets, ready for the 2019 targets.

In the past few months, the group has completed a securitisation with state guarantee (Gacs) for 5 billion assisted by Deutsche Bank, Mediobanca and Akros and with Akros in the role of servicer. The securitisation is the last of a long series of significant transactions recently finalised under the management of Edoardo Lombella (in charge of portfolio disposal). In June 2017, for instance, the bank sold to Algebris the portfolio Project Rainbow for 693 million, composed of secured loans backed by hotels, commercial and residential properties. In December 2017, the bank sold the Sun portfolio, worth 1,8 billion, to J Invest and Hoist Finance.

09 May, Bebeez Christofferson, Robb & Company (Crc) and Bayview might put for sale by June an NPL portfolio worth...