A new amendment regarding the securitisation of NPLs is currently under discussion and it might be included in 2018 budget. 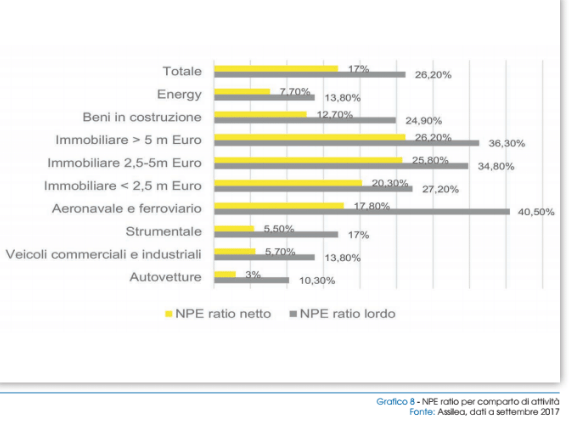 After that the chapter dedicated to new adjustments of Law 130 on securitisations was totally rejected, the experts were hoping to re-propose to the Chambers one or more amendments that would summarize the main topics to improve the regulation. An amendment has been indeed presented and it will also be admitted into the discussions regarding the new budget, which will be voted soon.

This amendment, the number 110.17, however, presented by Paolo Petrini, Vice-president for the Finance Commission of the Chamber, concerns only the last changes introduced in June with the Law 130 on securitisations of leasing contracts. They’re certainly interesting adjustments, but not so relevant as the market was expecting since the same Alessandro Rivera,  responsible for the Policy and Regulation of the Ministry of Economy and Finance, said that he would work on law 130 before the end of the current administration.

More in detail, the aim of the amendment is to admit the consolidation of the vehicle company not only in the financial statement of the bank but also in that of the financial intermediary authorized to carry out the leasing activity.

The current regulation, in fact, states that the special purpose vehicle appointed for the securitisation might buy directly real estate assets and contracts. It states also, however, that a support vehicle company might be constituted, in the form of a corporation, with the sole objective of acquiring, managing and promoting those assets and contracts, in the exclusive interest of the securitisation operation. But this support vehicle nowadays can only be included in the financial statement of the bank. If the special purpose vehicle could do the same, without constituting another vehicle, it would save time and money. Alternatively, the amendment proposes, in order to simplify things, that it would be ideal that the support vehicle would be constituted not only by a bank but also by an intermediary.

Among the problems of the current regulation, there is also the impossibility of transferring assets suffering from planning and cadastral irregularities, which is true for the most part of assets associated with non-performing leasing contracts, where such irregularities are due to the owner of the assets, and not to the leasing company. If there is no exception concerning the securitisation of leasing NPLs because the transfer will be considered void and notaries will refuse to proceed. Without a waiver in such cases of void operations on the Civil Code, the new regulation of June risks not being helpful when it comes to securitise NPLs related to leasing contracts, because who buys these portfolios asks for an indemnity to cover the risks associated with it, reducing in this way the transfer price. For this reason, the amendment asks to consider the temporal deferment of the regulation steps, giving the responsibility for their fulfilment to the intermediary, as already dictated by the “bank decree”.

At the date of 30th June 2017, the stock of non-performing leasing contracts amounted to little less than 24 billion euro and the securitisations of these defaulting leasing might allow to save up to 30% on the RWA (Risk Weighted Assets, namely the assets weighted on the risk according to the coefficients set by the European regulation on the minimal assets requirements for banks facing credit risk) calculated on such impaired portfolio. The total of the assets released through this securitisation would be over 6.3 billion euro, an amount equal to 7% of the whole leasing portfolio registered on 30th June.

The non-performing credits from leasing were 25.6 billion euro gross at the end of 2016 on a total of 93 billion euro paid, calculated Katia Mariotti, partner for non-performing exposures & non-core asset Mediterranean leader for EY during her participation at the Assilea conference. Of these credits, 19.5 billion (76%) were property leasing contracts, 12.7 billion (65%) of which were non-performing.