Italian courts are becoming more efficient concerning property foreclosures and bankruptcies. These are good news for banks, which can obtain now faster collections of their bad loans. According to the analysis by Moody’s which was published yesterday, the number of completed procedures in 2017 surpassed that of new ones for the first time. In other words, the ratio between new cases and closed cases dropped below 100%, as the agency calculated based on the figures from the Ministry of Justice. The data for Italy reached 89% (from the 124% reported in 2014). The values are below 100% also in the south of the country (from 105% to 84%). The numbers also improved in central Italy (from 140% to 97%) and the north (from 135% to 87%). These last two areas show higher percentages on average due to the higher incoming flows of new NPLs. 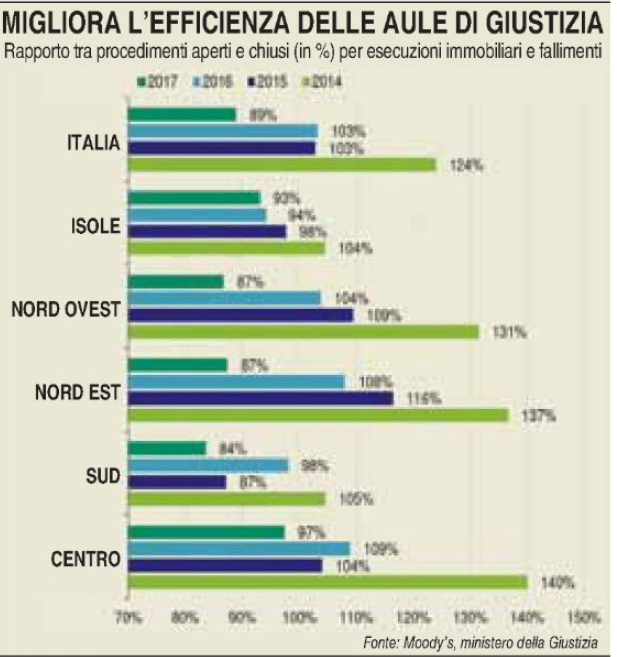 According to Moody’s, the judiciary reforms launched between 2014 and 2016 started giving their results, although “additional interventions might improve the efficiency of courts even further”. However, procedures in Italy still take longer than in the rest of Europe. The agency tough considers the results as “credit positive” regarding NPL securitisations. The improvements in the procedures will especially impact operations at the starting phase of the legal proceeding. “If Italy’s economic situation remains stable, we forecast that the repayments will be quicker and legal costs related to NPL securitisations will reduce”, commented Moody’s analyst Andrea Corda. It’s critical for the NPL market to avoid the slowdown of the national economy so that courts will not be stuck again with new property foreclosures and bankruptcy procedures.

The property market in Trentino is recovering: +18% for houses in the first eight months

05 October, Corriere del Trentino The residential market in Trentino has unexpectedly reported a growth. The first eight months of...