As PwC already anticipated last month, at the end of 2017 in the accounts of the Italian banks, there were UTP for about 94 billion euro, bad loans for 165 billion and past-due credits for over 5 billion. Therefore, the total impaired loans amounted to 264 billion euro, having decreased from the 324 billion in 2016 (NPL for 200 billion, UTP for 117 billion and past-due for 7 billion). This debt reduction trend is destined to continue, according to the PwC analysts, during the presentation of the last report on the Italian debt market. 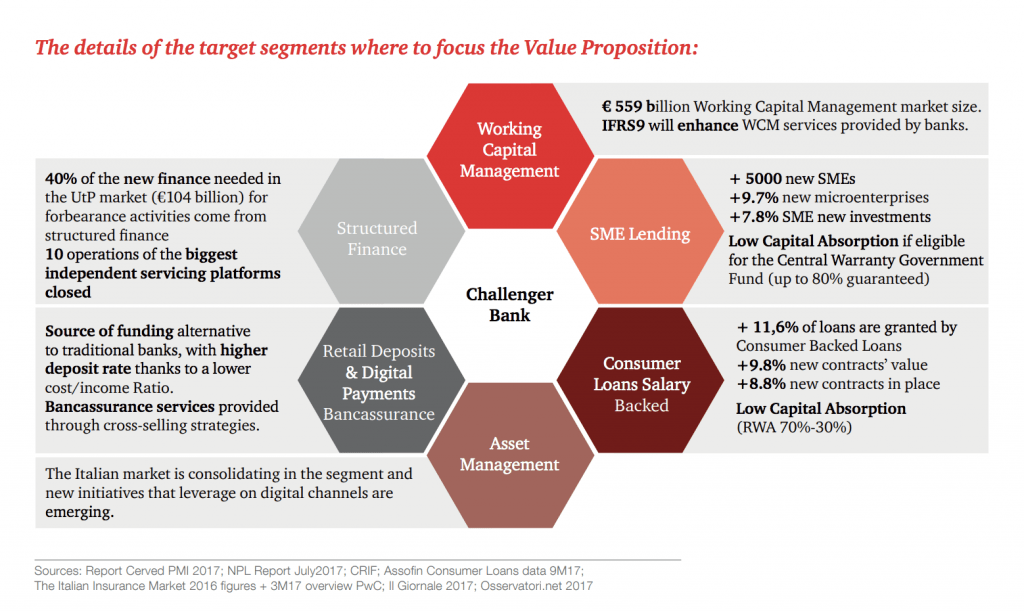 Banks have to deal with impaired loans other than NPL also due to the introduction of the new IFRS 9 accounting rules replacing the IAS 39 concerning the registration of financial instrument. The new regulation went live on 1st January 2018 and required banks to register the expected losses on loans as realisable losses. The new regulation will affect significantly the future financial statements already from this year, due to the adoption of the principles of expected loss (the registration of the expected losses and not of the already occurred losses) and of forward looking (as a result, banks will have to assess and measure the chances of default of the loans issued during the whole duration of the contract).

Banks’ strategies will be increasingly impacted by the requirements from the national and international regulating authorities. In Italy, the ECB guidelines will also extend to the less significant banks (with lesser NPE quotas). The calendar provisioning included in the ECB addendum will considerably accelerate the provisioning for bad loans originated starting from 2018.

In this regard, PwC stressed the importance of the business model known as “challenger bank”. Such operators will be able to provide integrated services concerning specialty finance and servicing, offering comprehensive solutions for the management of bad loans of the Italian banks, including the servicing of unlikely to pay.

An example of a bank pursuing such a model is Guber Banca. The servicer, a subsidiary of the fund Varde, got the banking license to become a digital bank operating mainly in credit and SME services, with a specialisation in NPL and UTP management, also in partnership with institutional investors.

The business model adopted by Guber is the same as Spaxs, the Spac of Corrado Passera and Andrea Clamer. However, while Guber became a bank after having obtained the banking license from the ECB based on a new business plan and a proven track record concerning bad loans collection, Spaxs announced the business combination with Banca Interprovinciale, namely an entity already holding a banking license. The Spac of Fabrizio Viola is expected the follow the same path. Fabrizio Viola was the Ceo of Popolare di Vicenza and Mps, and he’s currently a senior advisor for Boston Consulting regarding financial institutions. His company aims at raising 200 million euro to invest in a small bank to turn into a challenger bank. Another former banker, Roberto Nicastro, might do the same thing with Rnk srl. The company might acquire shares in fintech companies and startups to whom it will provide consultancy services and strategic plans.

Fitch shares the same considerations of PwC on challenger banks and UTP. The rating company, in fact, has recently stressed how fintech has entered the Italian market of non-performing loans. According to Fitch, the complexity of the analysis of unlikely to pay will bring banks to increasingly require the services of special servicers skilled in the use of artificial intelligence and machine learning technologies and able at the same time to form strategic partnerships with solid financial companies.

When the 13th December 2016 Unicredit announced an agreement with Pimco and Fortress for the transfer of a portfolio of...