A new piece in the Porta Volta mosaic. After the requalification of the area surrounding Cimitero Monumentale, the extension of the M5, the launch of the Feltrinelli Foundation, now it’s time to transform the former power plant located between Via Ceresio and Via Bramante and the square facing Cimitero Monumentale. The project was paused due to the appeal of the residents to the Regional Administrative Court (Tar). Yesterday the constructions site was launched, and in June 2019 the area will completely open to residents and tourists. 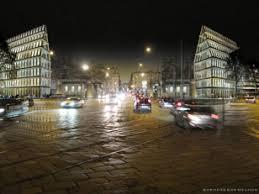 The surface of 8 thousand Sq m is named “Pausa Urbana”. Six thousand Sq m will be open to the public, the area will feature a big fountain, benches and trees will lead the way to the liberty-style villa built in the middle of the 19th century. It will be the new Adi offices (the Industrial Design Association), which had long waited for a headquarter, along with a gallery dedicated to design. There is also the possibility of an additional exhibition to showcase the most iconic creations of Made in Italy endorsed by the companies of the sector.

A “winter garden” in the central corridor of the industrial structure, with the light coming from a glass ceiling, a space for events (and open to the public) to promote graphic design, a bookshop and a library will complete the project “Isolato 1” for the maxi requalification of the area. The intervention was approved in 2011 and includes also an eight-storey hotel and a residential complex near Via Niccolini and Procaccini. The underground garage is already finished, with a capacity of 300 parking spaces and private access on Via Ceresio. Here, several companies of the fashion industry (Dsquared, Massimo Bonino, Neil Barrett) have recently arrived. Finally, the plan is the completed with the requalification of a building north from the power plant, acquired by the real estate company Barings.

To remind of the “electrical” nature of the plant, three single-phase transformers from the previous century will be kept. These symbols of the past will welcome visitors of the new design gallery, a 19th century depot for trolley buses and horses once property of Sao (Società anonima Omnibus) in Via Bramante, it was turned by Edison into a power plant in 1896 during the transformation of the Porta Nuova area (once called Porta Tenaglia) according to the Beruto plan, the first urban planning project in Lombardy dated 1884.

The demolition starts today: only the liberty-style exterior will be spared, whose columns will be strengthened with cast iron and carbon fibre reinforcements. This urban renovation plan will be carried out by Immobiliare Porta Volta (guided by Vitaliano Borromeo) and the works will be supervised by the firm Archemi.

The new Adi headquarters, currently confined in a small space in Via Bramante 29, will be designed by the architects Bodini and Perotta, while the design museum has been assigned through a competition won by the project “Arc-Adi” by Ico Migliore, Mara Servetto and Italo Lupi, and they say that the project they have in mind will be like “an ark of contemporary design”. Adi will lease the space for 35 years. In the multifunctional spaces, the City of Milan will organize a great exhibition once a year and at least other three events of a duration of one week.

The Councillor for urban planning Pierfrancesco Maran is happy with the outcome: “Not only we’ll recover a historical building, but we’ll also have a new square in an area that has turned to be quite active in the recent years. From the requalification of the square in front of Cimitero Monumentale and that of Via Sarpi, till the implementation of the new M5 stations and the creation of the Feltrinelli Foundation, Porta Volta is becoming the new heart of Milan”.

LendLease and Risanamento to implement business district in Santa Giulia

10 July, Il Sole 24 Ore Following the acquisition by LendLease of the Sky tower, Santa Giulia might become an...