High yields, good quality properties available in large quantity, an increase of the demand for spaces due to the growth of e-commerce. There are at least three reasons for the investments boom in logistics properties reported in the last few months. According to Jones Lang LaSalle, 2017 has registered a turnover in Italy 28% higher than the previous year, totalling 800 million. The figures don’t take into account the operation for 12.5 billion by Black Stone for the sale of the European properties managed by Logicor to the Chinese Cic (China Investment Corporation) implying a change of ownership for over one million Sq m. 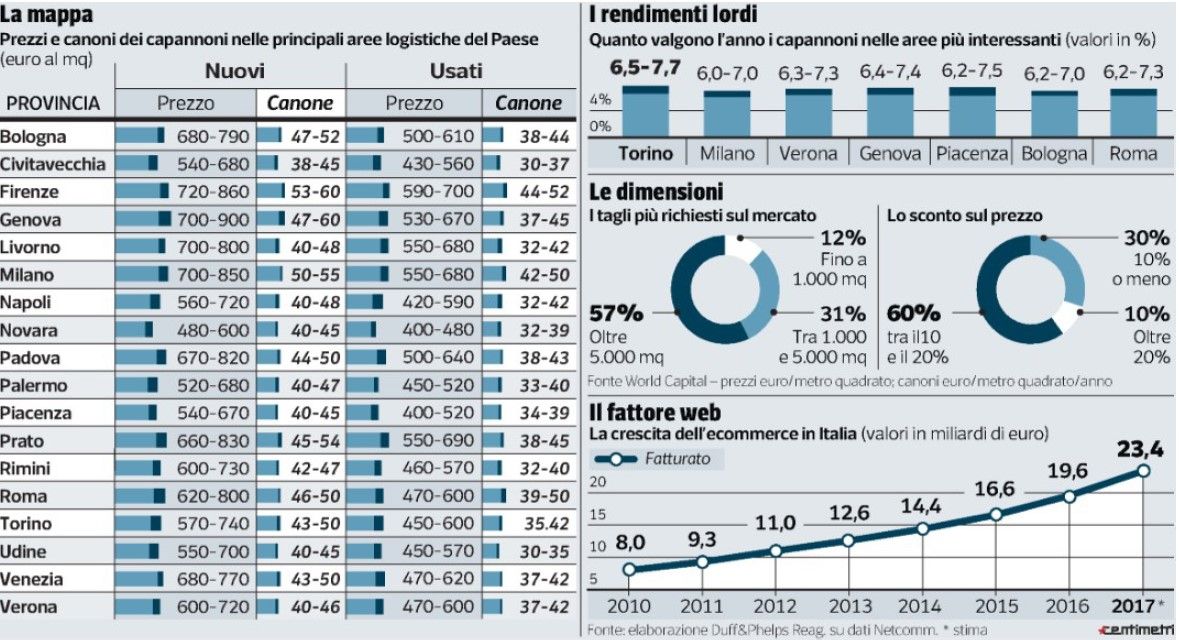 The latest report by World Capital shows rent prices have grown with peaks of +12% in Piacenza, where the demand for spaces form companies such as Amazon is growing. The heights prices for new depots have been registered in Genoa, reaching 900 euro/Sq m, 50 more than Milan. Genoa, together with Florence, has the highest rent prices, with 60 euro/Sq m yearly, while in Milan is set around 55. In Milan, the average return on investment is comprised between 6% and 7%, aligned with the national average, while in cities such as Turin returns can reach up to 7.7%. According to World Capital, the positive trend of the sectors is also confirmed by the reduction of average selling times and by the increase of the demand for large-sized properties. The demand for logistics properties will likely end up reducing that for traditional retail ones, considering the recent growth of e-commerce.

According to the Netcomm Observatory, 2017 has closed with a turnover increase due to online transactions for 23.4 billion euro, growing by 19% compared to the previous year. As highlighted by Reag, the international advisory firm owned by Duff & Phelps, the demand for properties destined to companies operating in e-commerce is forced on high-quality properties, capable of accommodating a great number of workers (perhaps, until they won’t be replaced by robots). The demand is particularly focused on multifloored facilities. And there is no offer shortage.

According to the figures included in the Reag survey, in Lombardy only there are 4.9 million Sq m on offer, with a reduction of 3.9% on a yearly basis; of these, 2.4 million are located in the metropolitan area of Milan and nearly 600 thousand are in the province of Monza-Brianza. In these two areas, the total stock has grown by 9.4% in 2017. Not all of them are high-quality properties though: Grade A properties (those with the most updated construction and technologic characteristics) are about 25%. In terms of available spaces, Rome is second in the chart with 772 thousand Sq m, followed by Turin with 658 thousand.

The property market in Viterbo is booming. This is the right moment to buy

20 January, Corriere di Viterbo Good news for all who wants to buy a house in Viterbo. The market is...