Atac is selling buildings and depots for 100 million euro, nearly one-third of the value of its real estate assets. To do so, the company has appointed an advisor, for a fee of 21,249,60 euro plus VAT, with the task of assessing the transfer operation. “Considering the urgency to formalise the appointment, as well as its importance in the strategic plan”, Atac appoints “the company Reag – Real Estate Advisory Group srl – for the assessment of the properties owned by the company”. That’s it, the troubled municipally owned company, after having to appear before the Court for a debt of 1.4 billion euro, has started to disinvest some of its assets. 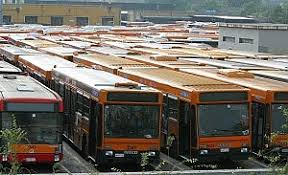 The nomination of an advisor is substantially the start of the transfer process of 18 properties in order to avoid the default. The properties are scattered all over the city of Rome: the old depots Vittoria in Piazza Bainsizza, San Paolo in Via Alessandro Severo, Tuscolana in Piazza Ragusa, and the depot in Trastevere; the areas Garbatella, Centro Carni, Cardinal De Luca , and the depot Acilia; the substations Nomentana, San Paolo, Etiopia, Lucio Sestio and San Giovanni; a big facility in Via Rogazionisti, a big building in Piramide, the former operational offices in Garbatella, an apartment and an office in Via Tuscolana.

The operation might bring to the company earnings for 95,553,965 euro, about one-third of the 310 million (309,273,503 euro, to be exact) representing the voice “lands and buildings” in the financial statement. The nomination is the first step to get rid of all the assets that are a burden for Atac, a possibility that was suggested in the past but never implemented before. Certainly, this is a crucial step, even though it will take time to make an assessment, find a buyer and then cash the earnings from the sale. But perhaps, the political meaning of the story is even more interesting since the choice of disinvesting represents an element of discontinuity with the past. Moreover, the other challenge, from a political point of view, concerns the tender for the new service provider company, in contrast with the extension of the service contract granted to Atac by the current municipal administration.

Either way, getting rid of the assets burdening the company has become a necessity, considering these are mostly crumbling buildings and actual bus cemeteries with even burnt buses such as in the case of the depot in Via Ragusa. Besides, disinvesting is one of the conditions to get the approval from the Court for the anti-=bankruptcy procedure. In fact, the Court demanded an assessment of the assets not in use and all the “non-operating properties” that the judge expects by 26th January.

The strategic plan for the relaunch of Atac also includes the increase of the productivity bringing from 37 to 39 hours of the working week for all the employees. There is also the investment strategy to make the company more competitive, such as the implementation of the fleet with the purchase of 800 new eco-buses by 2021.

Italy in pole position to ride the wave of innovation

16 February, Cbre The key word for 2018 will be innovation. Or rather, it will be a particularly topical form...