In Rome, in the Eur business district, a new Hilton hotel will open in 2020 by Nuvola (“cloud”) building. The building, named Lama (“blade”), featuring 439 rooms and a very particular architectonical structure, has gone to the hospitality multinational which already owns in Rome the Fiumicino Hotel and the Garden Inn Rome Airport. Eur Spa sold the hotel to Icarus for 50 million euro. 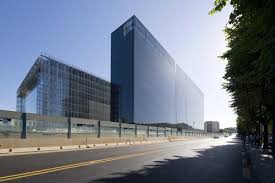 Hence, a story that lasted two years has come to an end. It has been the conclusion of a competition over a hotel destined to represent a strategic location due to the events and conferences hosted in Nuvola owned by Eur Spa. It’s not by chance that there is finally a date for the opening of the Convention Bureau, the bureau working on facilitating conferences throughout the Capital. The Rome conference sector needs new hotel facilities in order to accommodate all the participants.

According to Emea Hilton Vice President Patrick Fitzgibbon, “the arrival of Hilton Rome Euro – La Lama will further improve the offer for events and conferences in the city. The unique design of the hotel and the service level for which the brand is known to make of it the first conference hotel in the country”.

At the ground floor, there will be a restaurant, and a lobby bar open all day, while the restaurant on the 15th floor has the potential to become the best restaurant in the area. The hotel will feature an executive room, a business centre and a fitness centre. In conclusion, it will have everything to grant to conference participants coming from all over the word their best stay.

Icarus Spa president Filippo Rebecchini is happy with the outcome: “This year is the 20th anniversary of our partnership with Hilton. Since the opening of our first hotel, the Hilton Rome Airport in 1999, we’ve created together some of the best hotels in Rome. The Hilton Rome Euro – La Lama is the next chapter of our story. It will offer our hospitality values to our most loyal customers”. In this way, Eur has grown its offer.

Unfortunately, there is no news concerning the Aquarium. Do the complicated situation of the owner company, and the opening will have still to wait until further notice.

Conference tourism has grown a lot, and the efforts have started giving their results. 2018 closed with 120 members and partners adhering to the Convention Bureau and 207 requests for estimate coming from all over the world. Such requests undoubtedly show some interest in the destination as the possible setting for events. Many of the requested had translated into events, conferences and presentations taking place in Rome and Lazio over the course of 2019 and 2020, as well as in the following years.

The number of participants is not homogeneous. 78% of the request for work meetings consisted in less than 500 people, 14% were for conferences with over 3,000 people, 46% between 1,000 and 3,000 participants, ad 28% between 500 and 1,000 people. Finally, let’s not forget that a person travelling for business has expenses ten times higher than tourists.

Business is increasing by 8% in Milan, prices are reducing in the hinterland. From Porta Nuova to the former...