First steps for new “student district”. The new Bocconi campus will be inaugurated by the end of the month. It won’t be an official ceremony. We’ll have to wait the next year for that when the whole project extending over 36 thousand Sq m from the former milk factory till Via Castelbarco will be completed. The maxi project is signed by the Japanese architects from Sanaa which are working on re-designing the southern area with the sinuous lines of the new four buildings accommodating Sda Bocconi School of Management, the sports centre featuring gyms and an Olympic swimming pool, along with a public park and an underground garage. The students will move into the building which is the main highlight of the project: the nine floors of the cylindric tower in Via Castiglioni by Kazuyo Sejima and Ryue Nishizawa. It will become the new student halls of the university. 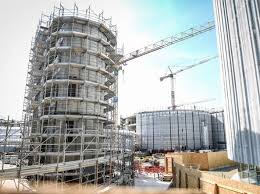 The university vocation of Milan keeps growing. Its universities attract students from all over Italy and increasingly more from abroad. As a result, the demand for accommodations is not stopping. Students are constantly complaining about the shortage of accommodations, as they have to deal with the skyrocketing prices of the private market. The supply is still very limited. According to a recent research by Jll, only 10% of the students have been able to find a rent at regulated prices. The student halls in the city centre are not enough. And neither won’t be the new 300 beds of Bocconi (together with those of the other seven student campuses owned by the university) are not enough. At least, the new Bocconi campus seems to have started a change. New projects are being launched all around the area for a total of two thousand beds which will help to reduce the gap between offer and demand, confirming the student vocation of the neighbourhood. Just some hundreds of metres away, the real estate giant Hines has acquired two properties near Bocconi. The company bought in February a building between Via Giovenale and Via Col Moschin, and another one in Via Ripamonti in August. The buildings have a capacity of 600-700 beds each, and they will be completed by the end of 2020, the first one, while the other one will be ready 12 months later. The total investment, considering the investment and the renovation works, is assessed around 160 million.

Finally, there is another student hall for about one thousand beds (exactly 992) in the area around Scalo Romana facing on Via Ripamonti that is meant to accommodate athletes just a few months ago when Italy was a candidate to host the 2026 Olympics. The City Council for urban planning Pierfrancesco Maran commented: “The projects are aligned with the transformation process the city is going through. Concerning the student halls, he added: “It’s one of the critical points for a city with a student population of 200 thousand students”. And he clarifies: “at the beginning of the mandate, Milan had about two thousand beds, now they’ve doubled and by the end of the mandate they’ll be over ten thousand”.

Department store near the Colosseum for sale in Rome