The alternative asset classes are the new goldmine for real estate. 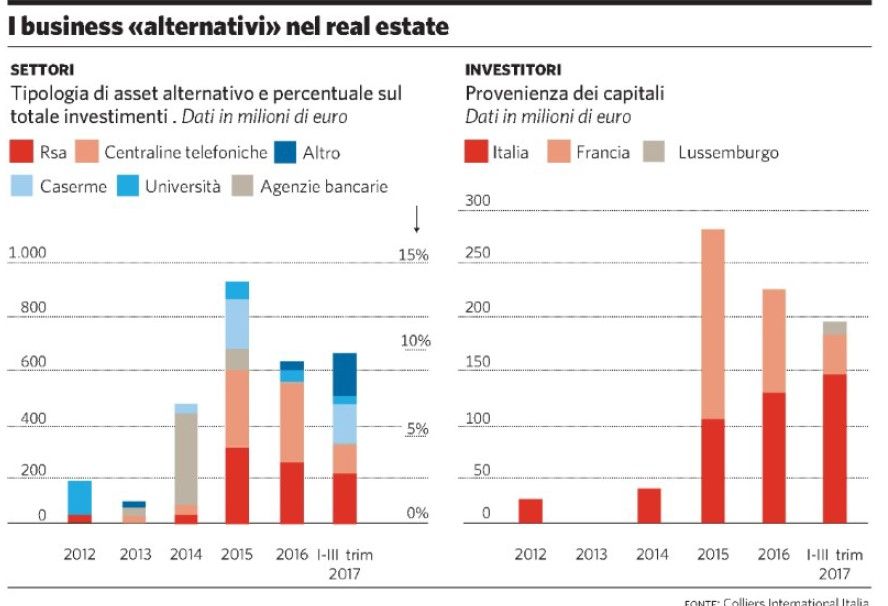 Some of these segments are mature and consolidated realities abroad, while in Italy they’ve just started. On top of the list for the investors there are assisted living facilities, that share the volumes in equal part with telephone exchange buildings. The categories concentrate 10% of the total investments (assisted living represents 5-6% of the total with 500 million), that reached 11 billion euro last year. A record for Italian real estate, that managed to attract foreign investments for over 70%.

Between 2006 and 2005, the assisted living sector reported only investments for 30 million euro, while in the period 2015-2017 investments grew up to 230 million. A study by Colliers International gives an account of a segment where the public sector is investing less and less, giving space to private capitals to take the opportunity offered by the ageing of the Italian population and the crisis of the family.

According to the report from Colliers, it emerges that in Italy the facilities managed by the public sector are more than 20% (including local authorities, public companies and other public authorities).

“The Italian population are ageing at a rate higher than the European average: 7% in Italy against 6% in Europe – reads the report – while the average number of beds has fallen to 12.2% for every one thousand people in the period 2010-2014”.

2015 registered the record of nearly 300 million invested, 65% of which coming from France. Investments decreased in 2016 to 200 million, while last year the transactions were 5-6% of the total volumes. “France is still exporting investors in this sector”, says Roberto Nicosia, Colliers Ceo.

If we expand the analysis to the healthcare sector, we can note some relevant operations. The most recent is the one concerning Humanitas, with a deal closed for 300 million euro. Axa bought five facilities from the group, one of which is the new campus just outside Milan. Axa already purchased in 2015 the real estate portfolio of the Monza General Hospital (seven hospital facilities and an outpatient centre). In 2016 the fund Antirion purchased the hospital San Giuseppe. These properties are very attractive since they give returns around 6-7% on average.

“The real issue concerns the composition of the offer, which is only partially investment grade – says Nicosia- hence, only a portion of the healthcare assets can interest big investors. In the Italian provinces, there are small facilities of little real estate value that don’t get the attention of investors”. The growth remains marginal. “There are some challenges in certain areas. The demand for these properties is significant only in Milan and Turin. Apart from these cities, it’s very difficult to estimate the catchment area elsewhere”, says Nicosia. Colliers expects an increase of investments in this asset class, despite the scarce offer that characterises Italy. “Abroad the insurance system supports elderly people while in Italy there is not such a thing”, concludes the interviewed.

The reference market for these acquisitions is mostly represented by Lombardy and Piedmont, while southern Italy has very little to offer. The social dimension is very significant. The main drivers of the segment are the investment funds specialised in healthcare (such as Geras, Scpi Primovie and the fund TSC Eurocare Real Estate), that in the first nine months of 2017 represented almost 70% of the total.

04 May, Milano Finanza Last year the national real estate market grew thanks to the positive trend of property transactions,...